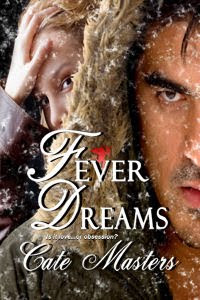 Available May 2010
in ebook and print
from Eternal Press

When Diana Taylor changes jobs, she doesn’t expect it to change her life. Meeting Cal opens up a new world of passion. He encourages her to pursue her passion for photography. Her love overwhelms her, blurs the line between reality and dreams. But is it love or obsession?

Review
Fever Dreams is a well-written contemporary novel that delves into the emotional journey of a woman deeply entrenched in a life headed nowhere. If you are looking for something different from the usual romance story, this would be the book for you.
The Pen and the Muse

Excerpt
Cocking his jaw, he scanned the room. “Last weekend, I called your apartment about twenty times.” His short laugh revealed his embarrassment.
“I moved,” she stammered. So that’s what he tried to tell her that morning when Jack interrupted.
He flicked his gaze to hers. “I know… now.”
“I didn’t realize.” What an idiot she’d been. “I disconnected my answering machine.” Trying to avoid Adam’s calls.
The ring of her cell phone interrupted. Adam’s name showed in the display. So much for her avoidance techniques. She sent the call to voicemail.
By his forcibly dissolved grin, he must have deduced the caller had been Adam.
She had to cut to the quick. She knit her brow. “Look, I don’t play games.” Losing had grown tiresome.
“Me either,” he quickly agreed, the image of sincerity.
If only he didn’t look so good—his hair uncombed, the layers tousled. His steely blue eyes piercing hers. “Why are you here? You said you don’t want to get involved with a coworker.”
He slid toward her. “I said I was hesitant to get involved.”
“No, no, no.” To put distance between them, she stood and paced in front of the table. “I distinctly remember your exact words. You said you did not want to be involved. And, it’s probably the best solution.” She stopped and folded her arms, avoiding his gaze. Until he spoke in that deep, low voice that reached inside, twined around her spine. Made her yearn to open herself as never before.
“Maybe I was wrong.” He spoke slowly. Deliberately. “Maybe I didn’t know how much I wanted you.”
A shiver ran through her, and she could barely respond. “Oh.”
Narrowing his eyes, he studied her. “You scare me.”
“Scare is probably not an adequate word for what you do to me.” She wouldn’t be able to articulate how he made her feel—unlike her usual self, but more like her true self than ever. As if his presence uncovered her core.