Did you ever have one of those days? Just when you think life's thrown everything at you and can't possibly think up any more terrible things... it gets worse. After my hubby's heart attack a few weeks ago, he came down with a terrible cold. I started feeling awful too. But I think I've cried all the toxins out of my system.
Yesterday, I came home from work, patted my dog Benji on the head, teased him about the Praying Mantis on the other side of the sliding glass door and got him excited before I let him out. Usually, Benji runs around the yard, doing his business, patrolling for errant squirrels, and checking on the pond goldfish to be sure they're not doing anything out of line. Then he'll walk the exact border of our yard to secure the perimeter. He's very fastidious about this. 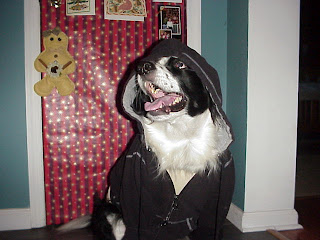 I put the tea kettle on and through the kitchen window, heard him cough. Sometimes when he sleeps late, things get backed up and he does this.
After a few more minutes, I went outside. It's not like him to stay out for too long when we're all inside. He's very much a people dog. A cuddler. When we first got him, we swore we'd stick to the rule we had with our old dog: no bed. Of course, that was before we knew how lovable Benji was. He couldn't get close enough. He saw us lying there, and slid one paw on the bed, then wriggled his head up, then the next thing we knew, we were letting not only Benji on the bed but the cat too. (Two extra furry bodies in a bed's nice in the winter, actually. Especially when the wood stove's running low.) Before we knew it, we were urging him to jump up on the bed. He was that great of a dog.
We used to joke that he had the nervous system of his border collie half, and the brains of his lab half. But he was all heart.
Benji could never bear to be alone in the house, either, so we took him with us most of the time. We hated to leave him because we loved to be with him. Such a baby, we teased him. And he almost was. Just like one of the kids.
Which makes it all the more heartbreaking. When I went outside, I found Benji lying down, panting very hard. He wouldn't get up, so I brought his water outside. No response. All his efforts were on breathing. We rushed him to the vet but there was nothing they could do. Apparently Benji had a tumor, and it ruptured, and he was bleeding. As painful as it must have been for him, he never once complained or even whimpered. So the most dreaded of all decisions: end his suffering right away?
My daughters and I spent a few minutes hugging him, telling him how good he was and how much we loved him, and then the vet put him to sleep. It was very peaceful, if horrible.
We brought him home, and now he's resting beneath his favorite squirrel tree. He used to sit there for hours, daring those squirrels to come down. Often, they did - they knew Benji had a good heart and wouldn't hurt them. He just loved the sport of the chase, and I think those squirrels did too. They might miss him as much as us. Almost.
There's a joke that says if you play a country song backward, you get your girl/boyfriend back, and your dog back. If I could, I'd play it backward. At least making this video brought back lots of great memories. He brought us great joy, and I'm grateful. But the greater the joy, the greater the loss. We will miss Benji forever.

Email ThisBlogThis!Share to TwitterShare to FacebookShare to Pinterest
Labels: Benji

Oh, Cate, how heartbreaking! But the video is a lovely tribute. What a great dog!

Hi Cate,
Bobbing up from my edits for a moment. I am so sorry to hear about your poor little doggy. You have my deepest sympathy on your loss.

Thanks so much, Susan and Margaret! Yes, Benji was wonderful.
Don't be surprised if a border collie-lab shows up in one of my stories!

Your Benji was a darling. I am sure you will miss him a lot, but he had a good life at your home. He was loved, pampered and had a lot of friends. It's good that you have a video to keep his memory alive. Thank you for sharing it with us.

Thanks, Mona. You're right. He packed a lot of memories into his six short years. He deserved all the pampering he got. :)

Dang dogs are our friends, our confidants, and our family. I'm truly sorry for your loss, but your story says it all - your pup will always be with you in your heart.

Oh Cate you brought back memories of all five dogs we have had. Each one had to be put to sleep with cancer. Though every one was totally loved.
I know how it fees to lose a pet, they are a little brother or sister. They take over your heart, your bed, your life, and you are better for it. Benji was so like all of our dogs, doggie friendly, kitty friendly and people lovers. They enriched my life. They tried to comfort me when I cried. I loved them so much. So losing a pet is as traumatic as losing a human. And not a lot of people can get that
I say with all sincerity that I am so sorry for your loss. I know it sounds weird, but I feel better when I get new dog to love. One who needs me too. Whatever you do, just remember the funny things and the dog kisses. Instead of a three dog nite, you had a one cat, one dog night.
Big hug for Cate and her family!

Thanks so much, Mike and Mary! You're absolutely right. Benji enriched our lives and I'm thankful we had him in our lives. Just wish it could have been longer!
Hugs back to you, Mary.

Darn it, Cate, you brought tears to my eyes. I'm so sorry to hear about Benji. He sounds like a wonderful dog.

Thanks Marci. He was wonderful. And it's too darn quiet around here...

Cate, I'm so very sorry for your loss! Benji was awesome - and your descriptions brought him to vivid life...as I'm sure he'll stay in your heart and mind forever. We recently put down our almost 21 year old cat, Saki - an orange and white tabby with a heart of gold and the calmest, sweetest disposition. Still leaves a hole. However, having that reflection of love and companionship is priceless. HUGS and Prayers!!
Marianne

What a touching tribute to your good friend Benji! I'm so sorry for your loss and know how you feel. Have been there so many times, but still have a dog and cat and three granddogs we love. They really do enrich our lives in so many ways, and it's hard when we lose them. But it's so worth it. Just remember all the good times and know he's in a happy place now.

Cate, I only just caught up with this from the WRP loop. I'm so sorry for your loss, being an ardent animal lover myself ad having had to part with beloved horses and dogs over the years I do understand the pain their leaving causes - but you did the right thing, recognised that there was nothing more to be done for him and have him a life full of love and caring. What a lovely tribute that video is. He'll always live in your pictures and your heart.

He was a beautiful dog.

Thanks so much, Marianne, Lucy and Lyn! Benji was a sweet baby.