Break out your coconut bras and grass skirts! Loosen up those hips for dancing in the sand! Tonight, I'm having a Hawaiian Beach Party at Coffee Time Romance 8 - 10pm EST on the Chatters E-loop. 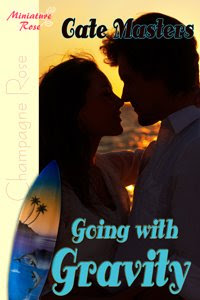 I'll be giving away a PDF copy of Going with Gravity, so you won't want to miss it!

Mistress Bella Reviews gave Going with Gravity its highest rating of 5 smacks, and said: "Wow! Talk about a book that will keep you on the edge of your seat until the very end. I was so captured by these characters and this plot. I had to know what was going to happen next. I had to keep reading until I found out the fate of these two characters. Could all really be forgiven and forgotten? Ms. Masters has given us another masterpiece. She has given us another story to stay up way past our bedtime to read. Never read a Cate Masters book? What’s wrong with you? You are missing out on a great author who writes such romantic tales that really touch your soul."

The Romance Studio rated this ebook as 4.5 books, and said: "Cate Masters took this plot and worked it into a great work even though it was not a long book. This story covered so much territory and was so compelling I did not want to put it down. The actions taken by the couple, the employers, and the tabloid photographers were so believable. It was as if I was there watching the story unfold. The conflict was great. The sexual encounters were sizzling and the ending was unexpected. There were moments of poignant emotional conflict. I liked this book and would recommend it to everyone."

Long and Short Reviews' 4.5 book rating said: "Going with Gravity is a condensed feel-good romance where the feelings and emotions of the hero and heroine touch you with their believability. Wes, the hero, is so darned sexy, I wanted to take him home. I’m not talking about his finesse with the spicy part of loving; it’s his class, style and solidness of character. Wes struck a chord with me that makes him a keeper."

So come to Coffee Time Romance tonight! I'll light the torches and open up the tiki bar.

To get you in a Hawaiian mood, here's the trailer: