According to legend, All Hallow's Eve is the one night of the year when the barrier between two worlds of the living and the dead dissolves, allowing visitors from The Other Side. I wove that notion into my Halloween-themed short, Reflections, released this month from Shadowfire Press. 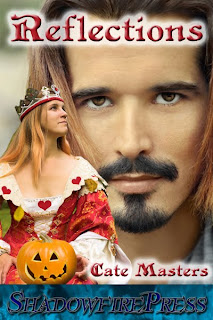 For a chance to win a PDF of Reflections, comment today or tomorrow. I'll announce a winner tomorrow night in the comments section.

One myth holds that the image in a mirror is our actual soul. If the mirror breaks, the soul could stray from the body. To prevent it, some would pick up the broken pieces and bury them outside in the moonlight after first waiting seven hours.

Girls who carry a lamp to a spring of water on this night can see their future husbands in the reflection.

Staring into a mirror at midnight on Halloween will show someone his or her future spouse.

Gazing into a flame of a candle on Halloween night will enable a person to peer into the future.

By placing fresh rosemary and a silver coin under her pillow on Halloween, a girl could glimpse her future husband in a dream.

A person born on Halloween can see and talk to spirits.

If you hear footsteps trailing close behind you on Halloween night, do not to turn around to see who it is, for it may be Death himself. To look Death in the eye, according to ancient folklore, is a sure way to join the ranks of the dead.

To cast a headless shadow or no shadow at all is still believed by many folks in the United States and Europe to be an omen of death within the next year.

If you'd like to meet a witch, wear your clothes inside out and walk backward on Halloween night.

According to an old British Halloween superstition, Satan was a nut-gatherer, so on Halloween night, people used nuts as magic charms.

For more thrills and chills, check out the Reflections trailer:

Okay...why wait seven hours to bury the mirror? It be interesting to try to meet a witch...wonder if t works.

Your trailer got me curious...what's in the punch? Hmm...

Yes I want to know whats in the Punch two.Entresting Trailer sounds like a good Book.
sasluvbooks@yahoo.com

Good thing I already know what lurks in the punch bowl, and oh yes, Reflections is a great read, because I never win contests or scratch off the right lotto numbers. My mom claims I won a big chocolate rabbit when I was two, which my older sister was happy to eat, but that's about it. Happy holoween and thanks for sharing all those mirrored myths with us, Cate.

I ain't doin any of that stuff. Why invite trouble. Gave me chills.

And the winner of Reflections is.... Stacey. Stacey, I'll email you your PDF. Happy Halloween.