As much as I love words, I also love images. A good image can equally capture the imagination. I'm a big believer that artists feed each other with inspiration, and one art form can spark a new creation in another form.
But now I'm getting too wordy, and I wanted to share some images I'd recently shot with my Nikon Coolpix, the one luxury I allowed myself last year. And being on a writer's budget, my definition of luxury has dialed down quite a bit - $229 isn't extravagant, especially given that I like to use my own photos in book trailers.
The area I live in is so beautiful, it feels like a luxury. The orchards change not only season by season, but sometimes a great deal within a single day.

Click on any image to enlarge for greater detail.

Sunrise can bring vivid colors to the horizon, as it did yesterday (sorry for the blur). 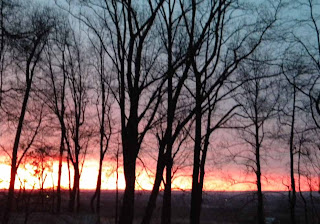 By midday, all color had drained away, and this image was so stark, I had to capture it (though not very well - I'm still learning the camera). 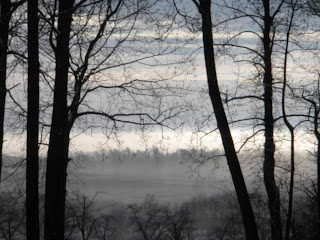 The young trees lined up in the snow also struck me as a stark, almost bleak, image. 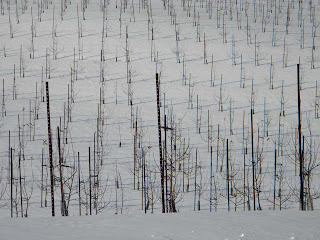 But sometimes the colors are almost eerie. The photo below is from last fall. The fog seems to glow as it rises from between the hills. It's actually the same view as in the second photo, though it appears completely different. It's very striking if you view it enlarged. (Go on, click on it! It's amazing.) 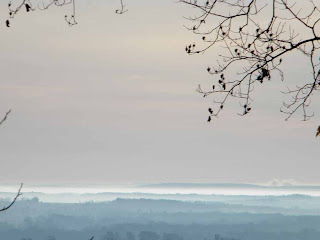 Snow defines the landscape in an entirely new way. 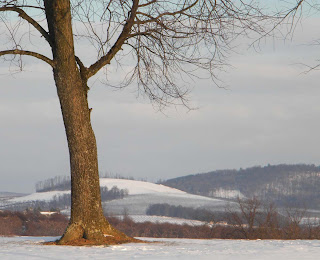 It's easy to imagine living here a century ago, when Civil War soldiers tramped these hills. 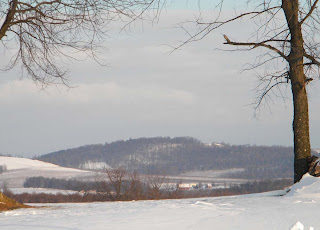 So if some of these images show up in my book trailers, you'll know where they came from. In the meantime, the 8 gig memory card allows for up to 3,000 photos (or six, depending on the resolution). So I have lots of room to play, and luckily, a wide margin for error.

Coolpix is a DSLR, right? So we're both on the same learning curve. Except you're a ways ahead of me. These are great!

Thanks Alice! No, I just bracket my shots (meaning I keep shooting until I get something passable! The beauty of digital!)
I love your photos too.

Thanks for sharing such beautiful images!

Thanks for stopping by, Emma!