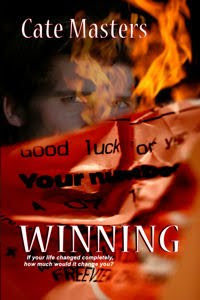 I am so psyched! Dawne Dominique is an incredible cover artist, isn't she?
I love this story's premise: If your life changed completely, how much would it change you?

It intrigued me so much, I had to write about it. The concept explores whether anyone would behave the same in different circumstances. Would winning the lottery enable behavior that they'd otherwise not have had the means for? Or would they behave the same, but on a larger scale?

Here's the (unofficial) excerpt:
Scattered people sidestepped the coins as the cup skittered between their shoes. Joe glanced at his watch; his supervisor would be more conscious today of his clock-in time. With a forceful exhale, his fingers readjusted on the handle of his briefcase. A tattered dollar flopped like a fish away from the beggar, who stared somewhere beyond, his eyes unmoving. Joe quickly set his briefcase on the dollar, retrieved the cup, picked up coins from the concrete and tossed them inside the cup. He reached into his pocket, frowned at the fifty–his only bill. Crouching before the beggar, he placed the cup back in his still-outstretched hand. With a rotten-toothed smile, the old man nodded and mumbled unintelligibly.
“Hey, do me a favor.” Joe inserted the fifty dollar bill into the cup. “Go get yourself cleaned up and get something to eat. Okay?”
The old man peered up. “Fortune will smile upon you.”
“Not if I don’t get inside.” Joe gathered his briefcase, let the revolving doors whoosh him through.
Two hours later, he called June at work. “Good news.”
“You got the raise? How much?”
“Five percent. Not as much—”
“Five percent? We’ll never afford the cruise now.” Her whimper’s not as sexy as it sounded fifteen years ago, when he’d slipped the ring on her finger.
He couldn’t blame her. He’d promised her a fifteenth anniversary cruise, and he’d make sure she got it. “Sure we can. We’ll watch our pennies—”
Her tone sharpened. “Watch them disappear. Another twenty’s gone from my purse.”
He groaned, half to himself, “Not again.”
The more money that disappeared from her purse and his wallet, the darker the circles around Janey’s glazed eyes. The more she retreated within herself.

Excellent excerpt. Really draws you in.