In the Author Spotlight: Imari Jade

Cate: Please welcome Imari Jade to the Author Spotlight! Imari, will you please share a short bio with us?
Imari: Hello, my name is Imari Jade and I’m a writer for several publishing companies, Midnight Showcase Fiction, Carnal Desires Publishing, Eternal Press, MoonGypsy Press, Total E-Bound and Sugar and Spice Press. My first book entitled “A Christmas to Remember” was published by Star Dust Press in 2006.

Cate: Tell us about your latest release, Oasis, and where it's available.
Imari: “Oasis” is available at Sugar and Spice Press. It’s an interracial romance set in Africa about an Hispanic female photographer named Charisma Romaine who meets and falls in love with an Nubian prince named Shakir Hakeem even though she’s supposed to be dating her ambassador uncle’s assistant.

Cate: Please tantalize us with a story blurb or excerpt.
Imari: Sure. To set it up this is the cute meet between Charisma and Shakir.
One 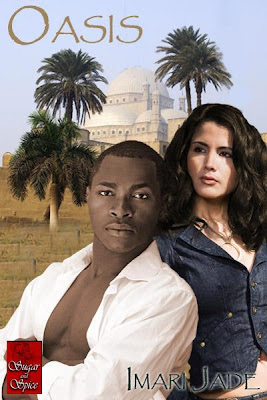 “Whew,” Charisma took off her hat and wiped the sweat from her brow. The sun blinded her as she looked up. It if wasn’t for the shyness of the sand viper she was trying to photograph she would be back at her aunt’s mansion lounging around the cool, wet swimming pool and sipping on a nice cold glass of iced tea. The viper stuck his head out of the sand, allowing her to capture its likeness in mid-strike as it lunged toward her. She moved away from the angry snake and continued snapping its picture until it retreated back into the sand. A throat cleared behind her. Turning, she stared up the flanks of a mocha-colored camel. Upon its back rode a hooded and partially masked black man with intense dark brown eyes. Behind him and the camel sat a caravan of desert vehicles and other camel riders.
“What are you doing?” His voice was deep, melodic and heavily accented.
“Photographing nature in its rarest form.”
“No, I mean what are you doing out here in the desert alone? The Sahara is a dangerous place even for a man.”
Charisma tore her glance away from his mesmerizing eyes. “I’m trying to get an award winning shot for a magazine if it’s any of your business. I can’t concentrate with a bodyguard shackled to my ankles.”
“A very unwise decision. You are much too fine to be unchaperoned.”
“Thanks for the complement but I’m properly covered.” She pointed to the veil on her face. “Nothing’s showing.”
“Apparently you’ve never seen what you look like from behind.”
Charisma looked up in a huff. “It’s rude of you to point out that I have a big butt.”
A few of the others chuckled.
“Not big, shapely and formidable.”
“Don’t you have anything better to do than harass me? I’m about to leave anyway. It’s too darn hot here and water is not quenching my thirst.”
“Good. I would hate to read tomorrow’s headlines in the newspaper and discover that something has happened to you. I can just see it now…young Hispanic woman with a gigantic butt succumbs to the hot Sahara heat.”
Charisma tried to ignore him as she bent over and put her camera back into the case.
“Formidable.”
She looked back to give him another piece of her mind but he was leaving. The rest of the riders and the cars followed him. Her heartbeat quieted moments later. He had the most gorgeous eyes she had ever looked in to. And that voice…deep and sexy. She fanned herself. It was the type of baritone that made a woman’s knees shake. “I wonder what the rest of him looks like.” She folded the tripod and tossed it into the back of her Jeep along with the rest of her things. “Too back he’s so damn arrogant.”

Cate: What inspired you to write about the theme?
Imari: Originally I had just finished working on another book about an Egyptian prince and then the idea just popped into my head. It was one of those “What If” questions. “What if a modern day African prince meets an exotic Hispanic woman in the desert?”

Cate: How do you develop your plots and characters?
Imari: Most of my plots are ideas gathered from news reports or just from a picture I run across. Once I have the idea I start writing and then create the characters and plot as I go along. After one of two chapters I usually know enough about the characters to give them some background. I follow that up with research. If it’s a historical I try to gather as much information about that time to form believable lives for the characters.

Cate: Do you feel as if the characters live with you as you write? Do they haunt your dreams?
Imari: Most of them do. I enjoyed developing Shakir’s character. I wanted to make him intelligent and independent instead of having him be just some pampered prince who is prosperous because of his family. I also wanted to make him sexy and arrogant.

Cate: What's next for you?
Imari: Right now I’m working on a fantasy novel that I hope to finish shortly. I’ve also developed two new vampire premises to follow the fantasy novel. Between May and July 2010 I have five books being published (“Pharaoh” with Siren Publishing, “Prophecy” with Eternal Press, “Something to be Thankful For” with Total E-Bound, “Hell and High Waters,” with MoonGypsy Press and “Bitter Fruit” (under a new pen name) with Phaze. I just signed a contract for a sixth one “Bayou Babe” with Sugar and Spice Press. I’m also working on the second book to follow “Death Takes a Holiday” and “In Love with a Dark Stranger.” So needless to say I will be very busy for the rest of the year.

Cate: Sounds like it - that's great! Any other published works?
Author: Yes, besides “Oasis” I’ve published a book called “Body Heat” with Sugar and Spice Press and they just contracted my book “Bayou Babe.” I’m included in several anthologies with Midnight Showcase Fiction (A Rose by Any Other Name, Love Never Dies, Damnation, Wet, Unwrapped Gifts and A Girl’s Best Friend) and in July they’re publishing “In Love with a Dark Stranger.” “Death Takes a Holiday” was originally published by Stardust Press and re-released by Carnal Desires Publishing.

Cate: What’s the most interesting comment you have received about your books?
Imari: The comment came from another writer after she read “A Christmas to Remember.” It was so cute. She said. “Girl you’re crazy.” For those of you who haven’t read it, “A Christmas to Remember” is about a heroine who has an addiction to sex toys and a hero who is a chronic masturbator. Neither one of them wants to admit that they have problems even though they visit a sex-therapist a couple of times a month and they think they have their problems hidden from their families. Unbeknownst to them their mothers are plotting to get the two of them together by Christmas. Hopefully it will be available again by this coming Christmas.

Cate: Who are some of your favorite authors and books? What are you reading now?
Imari: Anything Laurell Hamilton writes. I also love Candace Havens witch series, J. R. Ward, Black Dagger Brotherhood series. Of course I’ve read all of Charlaine Harris’ books, and right now I’m reading “A Quick Bite” by Lynsay Sands.

Cate: Where can you be found on the web?
Imari: I’m on MySpace, Facebook, Twitter and Goodreads. I’m working on my Amazon page and I chat at most romance Yahoo groups. Readers can find me at my site: http://www.imarijade.com/

Cate: Is there anything you’d like to ask our readers?
Imari: In what form do you like to buy books, E-book downloads or print form?

Cate: Thanks for being my guest, Imari! Best of luck to you.

Great interview, with all the books Imari is writing I don't see where she finds time to do interviews....She inspires me to get on with my writing. Teresa Jones

Wow, I'm impressed. Seems like story ideas are tripping all over themselves inside your head.
Sounds like a very busy few years for you. Congratulations.

Thanks Teresa. In between a full-time job and baby-sitting grandchildren I really don't have much time. I'm known as that strange woman at work who always walks around with a steno notebook and a pad because I write on break and on lunch and on the bus.

Hi Lorrie, thanks for dropping by. Sometimes I work on two or three outlines at a time. Right now I'm juggling two M/M outlines and trying to do the first edits on my novel "Cursed" for Moongypsy Press. It's a 450 page challenge. But I stopped a moment to scrub the grout on the bathroom floor and to say hello to all of you. And no I'm not kidding about scrubbing the grout.

Great interview! Your book sounds fascinating. I love stories where people from different places/cultures connect with each other.