Another great review for Picture This! 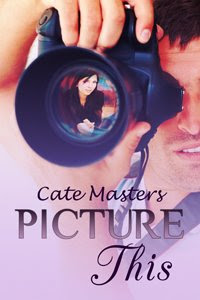 It's been a week of wonderful reviews!

Rita's Reviews gave Picture This 4 out of 5, and had this to say, in part:
This story was extremely easy to get into but not so easy to put down. I think I strained my eyes from sitting too long at the computer. You can relate to the characters and I easily become involved in their story. Sydney is like the friend you cheer on even though you secretly aren't sure about the guy.

Thanks so much for the wonderful review, Rita!

You can read the full review here.

Here's a different excerpt from the usual:

The pine tree’s sweeping branches presented an obstacle, but he pushed them out of the way and was soon out of sight. For the benefit of a middle-aged couple walking toward the door, she pulled out her cell phone and pretended to answer a call. When they were out of earshot, she asked, “See anything?”
Branches crackled.
“Ben?” she whispered.
The shutter clicked several times, and branches swayed.
“What’s going on?” She whispered louder.
“Shh. Hold on.” Another succession of clicks. After a moment, the branches opened out as he made his way through.
He brushed the front of his shirt. “I got a few…”
A stocky man in a white overshirt walked from the back of the restaurant carrying a garbage bag. “Hey – what’re you doing?”
Ben pulled Sydney to him. His warm, soft lips on hers sent an explosion of light through her brain, and its rumblings reverberated through her. A whimper escaped as she slid her arms tight around his waist and held on. With a moan, his hands slid low on her back, and his hips ground against hers. Her breaths came hard as she met his thrusting
tongue with her own.
“Get a room,” the man muttered. The back door slammed shut.
The urgency left them, but neither let go. She relaxed into him, relishing the touch she’d missed for more than a year. She wanted to remember this, since it might not happen again.
She opened her eyes. He held his closed. He looked so relaxed, so content.
All the tension had left her body, as if she’d had a long massage coupled with electroshock therapy. Kissing someone her own height had distinct advantages. This kiss was especially nice.
Her lips slid from his. “That was close.”
His face inches from hers; he moved his hands higher on her back.
“Very.”
She held back a smile. “I think he’s gone.”
He let out a long breath. “Sydney…” His words trailed as he appeared to struggle with what he wanted to say.
Still holding her, his eyes widened as two figures stepped from the walkway into the parking lot. His muscles tightened. “There goes the mayor.”