In the Author Spotlight: David Fingerman

Cate: Please welcome David Fingerman. David, will you please share a short bio with us?
David: Hi Cate. First, thank you for allowing me to take up space on your blog. I really appreciate all you're doing to help authors.
I live in Minneapolis and used to work in the court system. After twenty plus years of service I walked away. I've been writing (with publishing in mind) for about fifteen years, turning it from a hobby to a profession about four years ago.

Cate: Congrats on making the leap and following your bliss! Tell us about your latest release and where it's available.
David: At this moment my only release is 'Edging Past Reality' which is a book of speculative fiction short stories. If you go to www.davidfingerman.com and click on the book cover, it'll take you right to the site at Amazon.com. It's also available at B&N.com, Borders.com and most of the other online bookstores, plus a few independent bookstores in and around Minneapolis. I'm expecting my suspense/thriller novel, "Silent Kill" to come out within the next month or so. It's about a Minneapolis cop whose friend and fellow officer is missing. As soon as I get any new information regarding a publication date, I'll be posting that on my website.

Cate: Please tantalize us with a story blurb or excerpt.
David: I'd be delighted. This excerpt is from "Silent Kill." Just to set it up, psychiatrist Leonard Hout has been kidnapped and he has absolutely no idea as to why. Each arm, leg, and his torso is strapped on a board so he can't move.

The voice felt like ice on Leonard’s skin. Heavy footsteps on creaking stairs approached.
“I’ve got money. Please let me go,” the doctor pleaded.
“Particularly nasty, this one,” the voice said. He tapped the board with the toe of his boot. “Back at the zoo we called it ‘the surfboard.’”
The voice spoke soft, deep and menacing, like tightly controlled anger looking for an escape. There was no mistaking it for the insane cop.
“The keepers used to torture us with it. Its genius is its simplicity, don’t you think? I made this one in less than an hour.”
The giant bent over at the waist and smiled down as Leonard tried not to whimper.
“They tried to break me on it, but they never did. You would be easy to break.”
“Oh God,” Leonard whispered. He closed his eyes, and for the first time since appearing before the three-member panel for his board certification, the doctor prayed.
“I could have killed you. I considered it. I still might. You do what I want, and just maybe I’ll do what you want. Just maybe I might let you go. We’ll have to see how good of a boy you are.”
“What do you want?” Deep inside Leonard knew the lie for what it was. Logic told him that the man had no intention of ever letting him go. Leonard had seen it in his face. Maybe he could out think him. “I’d be more apt to do what you wanted if we could speak face-to-face like civilized human beings.”
The big man’s knees cracked as he squatted down, and then laid forward until his face rested on the board, his nose almost touching Leonard’s. The smell of chewing tobacco made Leonard gag. Seeing the brown juice dripping off the man's lips made Leonard struggle not to vomit.
“Apt? You’d be apt?” The man stretched over and licked a tear off of Leonard’s cheek. A wad of tobacco drooled out of his mouth and onto the doctor’s face, rolling into his ear. “Is this face-to-face more to your liking?”
“It means that I’ll be more cooperative, more willing to help . . .”
“I know what it means!” The man boosted himself onto his knees and slapped Hout on the ear. “Don’t talk to me like I’m stupid!”
With Leonard firmly planted on the board, his body had no give. The smack echoed in his head, pain reverberating to his teeth.
“Just for that, I’ll have to think up some games for us to play while you’re still my guest. You’ll cooperate no matter what! I’ll let you ‘apt’ on that for a while.”
As the footsteps faded, Hout fought desperately against the restraints, but all he accomplished was a deeper bite of leather into his skin.
Psychiatry deserted him. “Anything you want!” he shouted after the footsteps. “Anything!”
“We’ll see.” The voice sounded so calm it almost floated to him.
He heard a click and the lights went out.

Cate: Chilling! What inspired you to write about the theme?
David: It had to have been all those years in the courtroom. I definitely got to see the darker side of humanity. As scary as it sometimes was, I always found the human condition fascinating – both good and evil.

Cate: How do you develop your plots and characters? 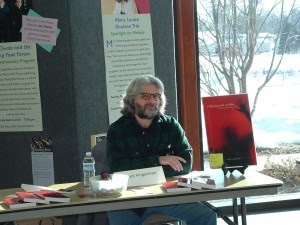 David: As for plot, I come up with what I hope is a great opening scene and then figure out how I want it to end. The hard part is connecting the two while trying to keep the reader intrigued. Characters pretty much write themselves as I go. I start off by filling out a character sketch sheet. It has their physical attributes, strong and weak points, etc. Most of what I fill in won't be in the book, but it keeps them consistent and more real.

Cate: Do you feel as if the characters live with you as you write? Do they haunt your dreams?
David: LOL. Some of my characters were born in my dreams. They don't haunt me but they certainly live with me.

Cate: What's next for you?
David: I just finished writing the sequel to "Silent Kill." I've got a couple of horror novels that I've been playing with – I might get serious with one or both and see what I can make.

Cate: Any other published works?
David: I've got a number of short stories that have been published in magazines and anthologies. Most of those are in the horror genre. I've also got a novel called "Spyder" accepted by L & L Dreamspell which I'm hoping will be out toward the end of the year.

Cate: What’s the most challenging aspect of writing? Most rewarding?
David: The most challenging is treating it like a job ~ writing every day whether I'm in the mood or not. The most rewarding, well, I'm kind of torn between two. One is seeing my work in print, knowing that someone besides me thought it was worthy of publishing. The other is when a complete stranger compliments me on my writing.

Cate: What’s the most interesting comment you have received about your books?
David: Actually it was the first short story I ever got published, and only because it came from my mother. "That's, um, interesting."

Cate: Who are some of your favorite authors and books? What are you reading now?
David: Harlan Ellison is my favorite author, and his book "Shatterday" is one of my favorite books. I recently read "Bone Song" by John Meany which just captivated me. Of course I'm a big Stephen King fan, and right now I'm thoroughly enjoying "Lamb" by Christopher Moore.

Cate: Where can readers find you on the web?
David: www.davidfingerman.com
http://twitter.com/davfin23
and I can also be found on Facebook. Anybody wanna be my friend? >: )

Cate: I'll look you up! Is there anything you’d like to ask our readers?
David: How'd I do?

Cate: Readers, David is giving away a book to a random commenter... so start commenting. He'll pick a winner and announce it here tomorrow night.

Best of luck with your projects, David.

I have read "Edging Past Reality" and it truly kept me on the edge of my seat. Just when I thought I'd figured out a story, Mr. Fingerman threw in a 'boo' that never failed to make me practically jump out of my skin. I look forward to reading his newest release.

I’ve had the pleasure of reading ‘Edging Past Reality’, which kept me on the edge throughout each short story! He really does a superb job of pulling you into his writing, describing so well you can’t help visualize the characters and scene.
I look forward to reading ‘Silent Kill’ when it becomes available.

An utterly fascinating excerpt from your new book. Congratulations, David!

I haven't read any of your books (yet) David !
i'm sooooo looking forward to have the chance to read them :)