If you are interested, my blog site is located at: Magician of Oz

In 2 weeks, I attend Oz-stravaganza! 2010 in Chesterton, New York, which happens to be the birthplace of Lyman Frank Baum, author of “The Wonderful Wizard of Oz (1899). 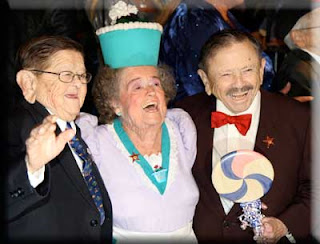 The theme for Oz-Stravaganza! 2010, is: “The Emerald City of Oz”, which is based on the 6th book in the Oz series written by Baum in 1910 and dedicated to former Chittenango resident and Baum’s niece, Cynthia Baum Tassini.

The Emerald City is an important part of Oz. Having been there myself, I can truly attest to that fact!

This is, by far, the biggest Oz festival of the year and I am one of their featured authors in Author’s Alley. For me, this represents the culmination of all my efforts to fulfill Princess Ozma’s command and tell the story of her new Royal Magician and his efforts to protect the Land of Oz from all things Evil.

There are many things I am looking forward to doing while there at Oz-stravaganza!. One of the most exciting for me is the opportunity to appear alongside 3 of the original cast members from the 1939 MGM film, The Wizard of Oz. They are:

Karl Slover, Margaret Williams Pellegrini & Jerry Maren
I have never had the honor of meeting real Munchkins before and frankly, I’m quite giddy at the thought of it.
Another highlight of this event for me is the opportunity to meet many other Oz authors, including John Fricke, Rick Ewigleben (Oz illustrator), Joshua Patrick Dudley, Julienne La Fleur, and especially Dennis Anfuso. I say that because Dennis and I met last year at another Oz festival in Chesterton, Indiana and as a result of that meeting, Dennis graciously offered to do the book cover illustrations for Magician of Oz and Shadow Demon of Oz, as well as the not-yet released Family of Oz. His work is amazing and I am blessed by Ozma herself for that chance meeting.
Two other authors I am looking forward to meeting are Bert Lahr, "The Cowardly Lion's" daughter, Jane Lahr and grand daughter, Maya Gottfried. As fellow authors, we all share a bond that goes beyond normal literary visions because we write of Oz… And Oz is not your normal slice of bread, so to speak.
In fact, one of the major reasons I was selected by Her Majesty, Princess Ozma, Ruler and Sovereign of Oz to write her story was because Oz is such a diverse and welcoming world. No matter where on this world you go, everyone knows Oz. Now, mind you, 95% of those folks know Oz from the 1939 MGM film, The Wizard of Oz and not the original 14 books written by the Royal Historian, L. Frank Baum. And yet, this fact does not impede my ability not only to write about the Land of Oz, but to have it accepted throughout the land and enjoyed by so many, both young and old alike.
Finally, my biggest thrill in attending this festival is the fact that my wife, Amanda will be attending. For anyone who has read Magician of Oz, they will recognize her from the dedication and her influence in my writing being made manifest in the abundance of Potato Soup.
When I set out to write the Royal Magician of Oz Trilogy, I chose food as a major story element. In Magician of Oz, it’s Potato Soup. In Shadow Demon of Oz, it’s the Reuben Samich and in Family of Oz (due out in early 2011), it’s Blackberry Cobbler. That way, when you complete the series, you’ve had soup, samich and dessert. After all, everyone eats and everyone has a favorite food.
In case you’re wondering about my books, Magician of Oz came out last year on the Summer Solstice 2009 and Shadow Demon of Oz was released just a few weeks ago.. 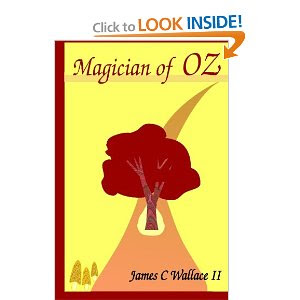 Magician of Oz Story Description
Life in Indiana was quite the adventure for young Jamie Diggs and his parents. After a tumultuous move from Kansas, Jamie explores the covered bridges, forests and cemeteries of rural Indiana where he discovers the ways of the Hoosiers. When his parents bring up an old humpback trunk from their basement, Jamie discovers his magical heritage lurking inside. Jamie learns the ways of magic from a local magic club, meets Tree-In-The-Road, gathers Morel mushrooms for his mother's legendary potato soup and discovers his great grandfather, the original Wizard of Oz's sentry stone. He soon finds himself transported to the Land of Oz where he must face the wrath of the Fighting Trees who have grown bitter after their defeat at the hands of the Tin Woodman so long ago. In this compelling tale of fantasy and adventure in the Land of Oz, the young magician discovers new friends along the way, conquers his fears and battles the oncoming wave of trees and mushrooms alongside Dorothy and Toto. 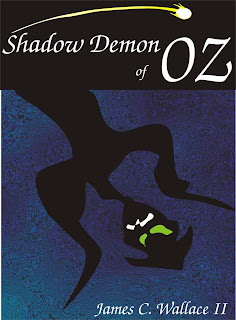 It was in the early month of Spring when the old humpback trunk of O.Z. Diggs, the original Wizard of Oz was opened by his great grandson, Jamie Diggs, revealing a magical heritage lurking within. Following in the footsteps of his great grandfather, a young boy named Jamie pursued the ways of magic and soon found himself transported to the magical Land of Oz where, alongside Dorothy, he faced his greatest fears and the fearsome Army of Trees in defense of the Tin Woodman. Now the young magician is called to return to the Land of Oz to take his place as the new Royal Magician of Princess Ozma; Ruler and Sovereign of Oz.

If you are interested in purchasing either of these fine books of mine, that information can be found at Amazon.com or by clicking on the following links:
Magician of Oz
Shadow Demon of Oz 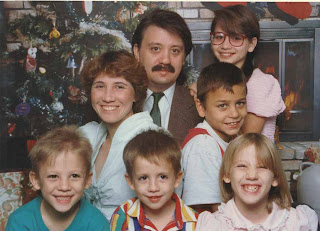 Who is The Royal Liaison to Princess Ozma?
James C. Wallace II, originally a native of West Virginia, currently lives in Terre Haute, Indiana with his wife Amanda. They have been married more than 26 years, with a herd of 5 children and 12 grandchildren. His background covers nearly 26 years in children's education, including experience working for the world's largest children's museum; The Children's Museum of Indianapolis, where he was the Planetarium Educator for SpaceQuest Planetarium. In addition to children's books about Oz, he is recognized by NASA as a leading developer of web-based educational games, educational exhibit design, curriculum development and implementation. In addition, he is involved in the DiscoverHover program, which is an educational program developing and utilizing hovercraft in a unique and fun way. He now serves as the Royal Liaison to Princess Ozma, Sovereign Ruler of Oz and endeavors to fulfill her royal command to tell the tale of her newest Royal Magician to the children of the Great Outside.

I'm not head-over-heels about Oz, but I find the idea of using it for the basis of a shared world interesting.