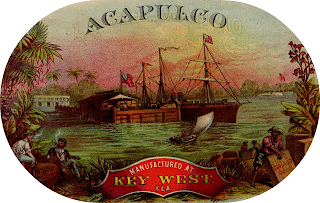 One of the most easily recognizable fare from the Keys is Key Lime Pie. Yum. The history of the pie has been lost to the ages. While some claim to have invented the dessert, most believe it originated in the late 1800s (after Angels Sinners and Madmen takes place, so I make no mention of it). Hard to say, though, since most people didn't begin to write down recipes until the early 1900s, according to the following web site. I'm fairly certain they didn't have prepared crusts then either. :)

I thought Mojitos a modern drink until I came across the following web site, which includes another interesting history. Because of Key West's proximity to Cuba, wreckers often sailed there for supplies. Cubans not only perfected the cigar (like the antique logo above, which I thought was pretty cool), but supposedly also the mojito. Unless you believe another story that English pirate Sir Richard Drake first mixed the drink and later introduced it to Cubans. Either way, it makes a refreshing summertime cocktail, but also packs a punch. A favorite of Hemingway's, I'm sure if the walls of the bars in Key West could talk, they'd have quite a few tales to tell.

The Magnificent Mojito: History and Recipe
2 oz. light rum
1-2 oz. lime juice (depending on your taste)
2 tsp. superfine sugar (you can also use confectioner's sugar)
2-3 mint leaves
club soda or seltzer water
lime slice and mint sprigs for garnish
Lightly muddle (that is, gently smash up) the mint and sugar with a splash of soda water in a mixing glass until the sugar is dissolved and you can smell the mint. Pour the lime juice into the glass, add the rum and pour into an ice-filled cocktail shaker. Give it a few shakes and then strain into a collins glass. Top with soda water or seltzer water, garnish with a lime slice and a mint sprig. Serve.

CATE--Lovely! I've been to Key West, but did not eat this pie. But I do make one very similar--and it's so good! The thing I remember aobut Key West--besides those rum cakes--was that the porch ceilings are painted blue so birds won't nest there--supposedly they think it open sky. Do I believe that? I don't know, but I used that in a story once. Thanks for the memories--and best wishes for you book--Celia

I love Key Lime pie and the groceries are full of key limes in the summer but we are on South Beach and so far haven't found a recipe that's approved. Keep hoping.

I lived near Key West for a while. Chocolate dipped frozen Key Lime Pie on a stick is wonderful. And the fish sandwiches, like hamburgers only better.