In the Author Spotlight: Cornelia Amiri

Cate: Please welcome Cornelia Amiri. Cornelia, will you please share a short bio with us?
Cornelia: When I was five years old, I saw Walt Disney's The Sword and the Stone and I’ve been interested in Celtic history and mythology ever since. In addition to my novel, Druid Bride, I have two novellas with Eternal Press: Queen of Kings and A Fine Cauldron of Fish, as well as seven books with other publishers. I live in Houston, Texas with her family: a son, a granddaughter, and a cat.

Cate: I was a big Once and Future King fan too. :) Tell us about Druid Bride and where it's available.
Cornelia: My Celtic/Romance Druid Bride is set in 1st century Scotland. The hero is a wild, woad tattooed Pictish warrior and the heroine is a noble, headstrong druidess. Here’s the blurb: She carried the seed of rebirth, so what had fallen would rise again. The ghost of her ancestor sent Druidess Tanwen from Britannia to the strange foreign tribe of the Caledonii to wed Brude, son of the chief. But Brude is not about to marry a druidess, even though she has the most beautiful body he’s ever seen. Never mind if his blood boils and he can’t stop thinking of her. He will not wed her. Yet the fate of Caledonia rests in the hands of the Warrior and the Druidess. Will they put their differences aside to fulfill their destiny? Available from Eternal Press. Also available at Amazon in kindle and paperback, Barnes and Noble Online, All Romance Ebooks, Fictionwise and most online bookstores.

Cate: Please tantalize us with an excerpt.
Cornelia:
Together they gulped down the golden mead. Never, not once, did they tear their eyes away from each other. 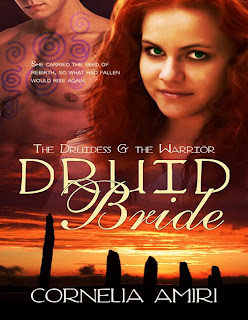 “As the mead flows through you, let the spirit fill you.” Tanwen walked over to the cauldron and dipped her hand in the dark, gooey, blue dye.
Her finger slinked down his face, streaking both cheeks blue. The woad was warm, her touch hotter. His tinted checks burned. After dipping her hands into the dye again, her ring-bedecked fingers danced over the muscles rippling down his arms, tracing each of his tattoos, following the lines as she painted them blue. He quivered. The gods shielded him through these symbols. The first was a wolf, with an open mouth drawn as a curve. Then the
boar with tusk made from a circle, with a line drawn though it and two knots on each end. His flesh tingled as she painted the lines of a swirling snake.

Cate: Oo, evocative. Love it. What inspired you to write about the theme?
Cornelia: I love the history of the Druids and as I set my book Druid Quest against the back drop of the destruction of the Druid Learning Center on Anglesey (Ynys Mon) by Governor Suetonius and the Boudica revolt in 61 AD, I wanted to tell the rest of the story. This inspired me to write Druid Bride against the back drop of Governor Agricola, who lead the second destruction of the Druid Learning Center and then brought his troops into Scotland to fight the Caledonii in a huge battle on Mons Graupius in 84 AD. Though the Pictish tribes lost that battle they were never actually conquered by Rome. Later, Emperor Harridan put up his famous wall to keep Roman Britannia safe from them and in the fifth century the Picts climbed over the wall and launched raids on Britannia, which shows that though it took many years, they conquered the Romans. This is an incredible era in Scottish history.

Cate: So cool you are bringing it to life in your fiction. What's next for you?
Cornelia: The Wolf and the Druidess, an Erotica/Celtic/Romance novella set in ancient England during Samhain, a Celtic twist to a Halloween/Werewolf story, will be released by Eternal Press December 2010. And I recently submitted an Erotica/Romance set during the 1969 Woodstock Festival. I had such fun writing that. I hope to hear good news on that. And I’m working on my second Steampunk/Romance, set in Victorian London, the heroine’s a ghost, and my 11th Celtic/Romance, a paranormal set in ancient Wales, the hero is a Welsh god. Both of those are works in progress right now.

Cate: Very intriguing! Such a wide variety. Any other published works?
Cornelia: Eight other Celtic/Romance books: Druid Quest, Timeless Voyage, Queen of Kings, The Fox Prince, The Vixen Princess, Danger Is Sweet, One Heart One Way, and A Fine Cauldron of Fish. As well as a Steampunk/Romance under the name of Maeve Alpin, As Timeless As Stone.

Cate: What’s the most challenging aspect of writing? Most rewarding?
Cornelia: Finding the time to write is the most challenging. You have to put writing first to get it done. It takes so much rewriting, so much time, to complete a book, all done by self discipline and self motivation. The most rewarding is knowing you reached the reader, you enriched their lives, gave them a bit of an escape, a bit of an adventure and a little romance. Hearing positive feedback from readers is the absolute most rewarding. It’s the readers that make it all worth while.

Cate: Who are some of your favorite authors and books? What are you reading now?
Cornelia: My absolute favorite books are Celtic/historical/paranormal novels like the ones written by Morgan Llewellyn, Jules Watson, Manda Scott, and Marion Zimmer Bradley. Actually at this moment, I’m currently reading two Asterix Comic Books.

Also I wanted to leave the readers with another short excerpt from Druid Bride:
He gasped. “I am honored. Druids seldom share their sacred secrets with anyone.”
“You are to be my husband. I will share all with you.”
Tanwen flashed a challenging grin. His heart leapt in his chest.Gods, this woman is dangerous. “You still insist that I am to wed you.”
“Yes.”
Her voice was warm and sultry. It made his skin tingle.“Boudica would not have sent me here if it were not to be.”
He had to be strong. He could not let this creature and her druid magic enchant him into a marriage he didn’t want.
“Nevertheless, you shared your secret with me. I shall share mine with you.” He leaned closer. “Heather mead.”
“I have heard of a mead brewed from heather that makes the Picts invincible to their foes.”
“It is so.” She’s falling for the trap, he thought. “As mistletoe grows on oak, moss grows on heather. Bees feed on the heather and make a special treat: heather honey. We brew mead from that honey, along with heather tops. It is all we need, no barley.” A small voice inside him said, A few cups of heather mead, and she’ll answer all my questions.
Her bright eyes gleamed with curiosity. “Due to the moss on the heather?”
“Yes, that is the secret. It also makes the mead stronger.”
Tanwen smiled. “Let us drink of this heather mead, together.”

Cate: Readers, Cornelia is giving away an autographed trade size paperback of Druid Bride to a random commenter... so start commenting. Cornelia Amiri will draw the winner’s name, notify the winner and post the winner’s name here.

Thanks for being my guest, Cornelia! Best of luck with all your projects.

This was great. I love the time period - the Picts. Read a lot about them while I was writing my first novel. Felt some of the background would help in rounding out my characters. Good post.

Thank you so much P. L. I appreciate your comment, thank you for posting.

It does look like a fun book. That's also one of my favorite periods and the cover is beautiful, very appealing.

What a gorgeous cover and sounds like a really fun book to read!

I liked your book Queen of Kings. I liked that it was a boo about a strong woman who didn't compromise. I like both lenghts of books

Thank you so much Kate. I appreciate you kind words. I love the cover also the artist is Amanda Kelsey.

I love anything Celtic. I cannot wait to read this book!

Thanks for the interview.

Thank you Joanne for your kind words. Amanda Kelsey is the cover artist, and I fully agree with you, I love all my EP covers. I can't wait to see what they do with the cover for my Celtic werewolf erotica romance, The Wolf and the Druidess, which will be released 12/07/10

Lady, It's always nice to meet another person who loves anything Celtic, I do also. Thank you so much for posting.

Brandy B aka Brandlwyne said...

This sounds sooo good. I am putting you on my authors list. The book is going on my book list.
I can't wait to see more!!!

Brandy B aka Brandlwyne said...

I did have a question for you, what are your favorite kinds of books to read and/or write??? How do you get your inspiration???

And thanks so much, Stephanie! :)

I really enjoyed the interview!! Book looks great!! I enjoyed Druid Quest so I know I will enjoy Druid Bride

Dear Brandy,
Thank you for the kind words. I appreciate it so much. You asked what are my favorite kinds of books to read and/or write? I’ll read anything, of give it a chance, but I love historicals with adventure and romance, especially those set in the middle ages or earlier. I also love paranormal, fantasy, time travel, sci-fi, and steampunk romances. I like to write these types of books as well. You also asked, how do you get your inspiration??? I’m often influenced by Celtic myth, legend and history. I was inspired me to write Druid Bride against the back drop of the destruction of the Druid Learning Center by Governor Agricola (Suetonius had destroyed it a little earlier during the Boudica revolt.) Then Agricola brought his troops into Scotland to fight the Caledonii in a huge battle on Mons Graupius in 84 AD. Though the Pictish tribes lost that battle they were never actually conquered by Rome. Later, Emperor Harridan put up his famous wall to keep Roman Britannia safe from them and in the fifth century the Picts climbed over the wall and launched raids on Britannia, which shows that though it took many years, they conquered the Romans. This is an incredible era in Scottish history that I wanted to share.

Thank you so much Stephanie,and I agree Cate's site is great.

Thank you so much Judy. I appreciate your comment so much. I'm so glad you liked Druid Quest.

Dying to read this one! I've read the excerpts and they definitely have my attention. Thanks for sharing! T.
finalcutediting@yahoo.com

Thank you. I appreciate that so much.

I really enjoyed the interview and the excerpts. Druid Bride sounds like a great read. And the cover is lovely.
tamsyn5@yahoo.com