In the Author Spotlight: Amy Ruttan

Cate: Please welcome Amy Ruttan. Amy, will you please share a short bio with us?
Amy: Amy discovered her love of the written word when she realized that she could no longer act out the fantastical romances in her head with her dolls. Writing about delicious heroes was much more fun than playing with plastic men dolls with the inevitable flesh-colored tighty-whities.
She loves history, the paranormal, and will spew out historical facts like a volcano, much to her dearest hubby's chagrin.
When she's not thinking about the next sensual romp, she's chasing after two rug rats and reading anything spicy she can get her hands on.

Cate: Tell us about Sorceress from the Sea and where it's available.
Amy: Sorceress from the Sea is the second book in my Enchantress series, book one was Enemy Enchantress. Sorceress from the Sea is about Edwin’s brother Alfwyn and his own adventure to find love, and to find himself.
He saved her life. Little did he know, demons were part of the bargain…
When Alfwyn’s father nearly dies, he realizes that he’s done nothing with his life. He has much to do in order to prove himself—maybe too much. But events are set in motion when, on a trip to the Westfold, Alfwyn rescues a maiden clinging for her life to a rock as the tide rolls in. The woman is mysterious, like no one he has ever seen.
Desperate to avoid a forced marriage to a powerful, demonic Warlord, Morag was driven to fake her death and have her body put to sea. The magic potion that set her free sends her to the safety of Alfwyn’s arms. But just as she is on the brink of falling in love with the melancholy, passionate man word reaches the Warlord that she still lives.
Alfwyn’s sword arm may be strong enough to ward off a legion of possessed warriors from hell, but only an extraordinary man has the courage to reach for heaven…in a sorceress’s arms.

Cate: Oo, I love that! Please tantalize us with a story blurb or excerpt.
Amy: A gull cried above him and he caught sight of something small and dark bobbing along the surface of the water. Squinting to get a closer look, he saw flowers covering the object. It was a funeral barge, a custom among the people that dwelled at the edge of the sea. 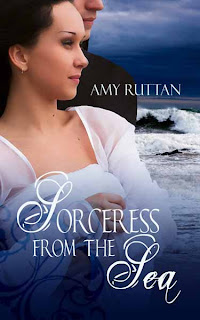 Poor soul. Alfwyn wondered briefly about the occupant, watching as the waves tossed the barge closer to the rocks. He couldn’t tear his eyes away as it jostled around like a feather in the wind until it crashed against a promontory of rocks, splintering into numerous pieces. Then there was a bloodcurdling scream.
Dead men don’t scream.
Alfwyn’s heart skipped a beat and he began to run double time towards the promontory, his cloak billowing out behind him as he ran. The scream echoed across the bay again, mixed with the roar of the incoming tide.
He saw someone clinging to the largest rock. “Damnation,” he muttered. The mist from the waves breaking against the rocky beach soaked through his clothes. He had to save whomever it was holding onto the rock before they really needed a funeral barge.
Climbing up the promontory, he tried not to slip on the slick surface as he edged his way out towards the rock. “I’m coming, hold on!”
The figure—a woman—craned her head over her shoulder to look at him. “Please, save me,” she said weakly in Runic.
“I will, hold on,” he said in Runic so she could understand him. He held out his arm, carefully edging his way along the rock. “Grab hold!”
The frightened woman nodded as she reached out a pale, bloody hand. It was cold, wet, and slipped in his. He saw her wince when he squeezed tightly onto her hand; he hated to hurt her, but there was no other choice. He had to grip her tightly so that she wouldn’t slip out of his grasp.
The woman’s nails dug into his wrists as she held fast. He helped her ease her way around the rock until he was able to grab hold of her waist and pull her into his arms.
The woman faltered, her legs giving out as Alfwyn held her tightly, her damp, lithe little body pressed hard against his. Her chestnut hair was plastered to the side of her face and her hazel eyes were large and wide with fear as she stared up at him.
“You’re all right,” he said soothingly. He could feel her heart racing against his chest. He took off his cloak, which was warmer than the thin cotton tunic she was wearing. He could see her naked body through the sodden material: her coral nipples, her round breasts, and the dark curls at the juncture of her thighs. Alfwyn’s blood began to heat as his gaze raked her body.
What are you doing?
He wrapped his thick cloak around her, doing his best to ignore his arousal. He noticed the intricate rune tattoos that ran across the top of her forehead and down her neck, disappearing under her hair. He had never seen anything like it before.
The woman smoothed her wet hair down over her forehead, gasping.
“No, it is all right. You are safe now,” Alfwyn said.
“Safe?” she asked.
“Yes,” he reassured her, fastening the cloak, “safe.”
Relief spread across her face shortly before her eyes rolled into the back of her head. Alfwyn caught her as she slipped down his body in a dead faint. Scooping her up in his arms, he carried her limp form carefully across the promontory and headed up the stony beach to Llewellyn’s keep. He had no idea who this woman was or where she came from, but he knew one thing: She needed dry clothes and something warm to eat.

Cate: Wonderful excerpt! What inspired you to write about the theme?
Amy: Alfwyn was such a vocal character in the first book, I knew without a doubt I had to give him his own story. He demanded it in fact.

Cate: How do you develop your plots and characters?
Amy: The characters just seem to walk into my head fully formed. A lot of my plots seem to come from my dreams or daydreams. If it’s a historical I research a bit about the time period and get ideas of plot from that. I do a lot of brainstorming and write the synopsis first. Of course, by the time I’m ready to submit the synopsis is lengthened or changed to suit the story but at least most of the hard work is done.

Cate: Do you feel as if the characters live with you as you write? Do they haunt your dreams?
Amy: Yes, my characters are very real to me. Even after I’m done with them. I think about them quite a lot, but usually new ones come and take their place.

Cate: What's next for you?
Amy: Book 3 in the Enchantress series is coming out December 7, 2010 from Eternal Press. It’s titled Healer of the Heart and is all about Cedric, a poor shattered soul who needs to be healed. I also have a gladiator series starting up from Ellora’s Cave and in the summer of 2011 my first urban fantasy is being released from Samhain.

Cate: Wow, that's great. Any other published works?
Author: I have several books with Ellora’s Cave and Cerridwen Press. Details of my backlist can be found on my website www.amyruttan.com

Cate: What’s the most challenging aspect of writing? Most rewarding?
Amy: The most challenging is editing. I go through several drafts before I’m ready to submit. I seem to pick a certain word and use it over and over again, so culling back on repetitive words has been my challenge. Most rewarding, hearing from the fans, hearing that a story I wrote was enjoyed by them.

Cate: What’s the most interesting comment you have received about your books?
Amy: Well, it wasn’t really a comment but when I was doing a book signing recently in Toronto with Ellora’s Cave I signed a couple of books for Klingons. They were very good natured and let me sign their books in their human names instead of making me spell Klingon. Very memorable.

Cate: Who are some of your favorite authors and books? What are you reading now?
Amy: Oh there are so many. Connie Mason, definitely one of the first romance authors I read. I heart Margaret Moore and have the privilege of knowing her through my RWA chapter. I am also a HUGE fan of Katie MacAlister and J.R. Ward. Of course there’s also Roald Dahl, Lucy Maud Montgomery and Laura Ingalls Wilder who shaped the course of my childhood towards fanciful.

Cate: Where can you be found on the web?
Amy: My email is contact@amyruttan.com I love to hear from readers.
My website is www.amyruttan.com and I have a Twitter account, which I’m very active on at www.twitter.com/ruttanamy .
I’m also on Goodreads, and have an author corner at Coffee Time Romance.

Cate: Is there anything you’d like to ask our readers?
Amy: Well, since Fall is coming I’d like to know your favorite thing about the Autumn season. Mine is Halloween, the crispness of the air, the changing of the leaves. Yeah I really love Fall. :)

Cate: Fall's my favorite season too. :) Readers, Amy is giving away an ebook copy of Sorceress from the Sea to a random commenter... so start commenting. She'll pick a winner on Monday, September 14th, 2010 around 7:00 p.m. EST.

Amy: Thanks for having me Cate!

Cate: Thanks so much for being my guest, Amy! Sorry I will be out of town for a few days, but wish you many many visitors and all the best with your release!

Thanks for having me here today Cate!

Hello Amy, your looks wonderful. I especially love the cover art. You sure are busy today; you're over here at Cate's Blog and you're over at Lena Matthews chat group. :D

Tell me about it Becca! Not to mention it's the first day back to school for the kidlets. I was ready to crash about 10 a.m. LOL!