In the Author Spotlight: Sharon Donovan

Prior to the loss of her vision, author Sharon Donovan was a legal secretary for the Court of Common Pleas where she prepared cases for judges in Domestic Relations. Painting was her passion. When she could no longer paint, she began attending creative writing classes and memoir workshops. After a long and winding road, a new dream rose.
Today, instead of painting her pictures on canvas, Sharon paints her pictures with words. Sharon writes stories of inspiration and suspense. She has certificates in business and medical transcription. She is a published author with The Wild Rose Press, White Rose Publishing, Whimsical Publications and Chicken Soup for the Soul. Echo of a Raven is a CTRR recipient, and The Claddagh Ring is a CAPA nominee. To read excerpts and reviews of Sharon’s books and to sign up for her newsletter, visit her website: www.sharonadonovan.com. You can also keep up with Sharon on her blog: http://sharondonovan.blogspot.com 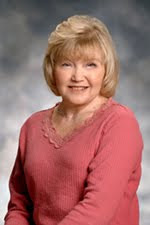 The Wild Rose Press just released Sharon's latest, Her Biggest Fan, as part of its Men in Uniform series. Her Biggest Fan is available in ebook and print. Please give Sharon a warm welcome!

Here's the blurb:
From the shadows of the woods, he keeps vigil. The stage is set to drive the pretty little princess insane. He’s coming for her. And when he catches her, he’ll pounce on her like the big bad wolf.
After receiving a disturbing fan letter, New York Times best-selling author Tess Kincaid flees to the New England home she’s inherited following her father’s death. The manor has been tainted, every room staged to resemble the way it was in its glory days. However when Tess calls the police, the chilling props vanish into thin air.
Ruggedly handsome Sheriff Mike Andretti is called to investigate the reported burning candles, dancing gargoyles and otherworldly events. When he discovers no trace of the eerie setting, he finds himself caught between duty and desire. Is the woman with the bewitching green eyes delusional or is this a trap of twisted wit set by a demented fan?

And an excerpt:
Cool air drifted out of the ballroom, carrying the scent of burning candles and cigarettes.
Music floated through the corridor, the seductive undertone hauntingly familiar. The music was hypnotic, mesmerizing. Tess could barely think over the loud beat of her heart.
Every sense screamed to beware. She was about to come face-to-face with her stalker, her biggest fan. But over the hammering of her heart and accelerated senses, her will to put an end to this deadly game prevailed. She had to face him, find out who was behind this bizarre masquerade. Anticipation mounting, she made the turn at the end of the corridor and came to a riveting halt. 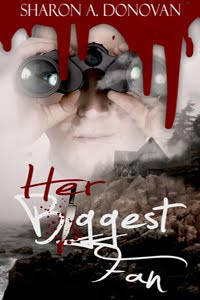 A female wax gargoyle stood in the doorway, long blonde hair billowing in the breeze. Her glass eyes shimmered with madness, an eerie smile on her face. In one hand, she held a mission bell, the other reaching out for a candle.
Music played from the old phonograph, the plucking of guitar strings laced with seduction. A breeze blew in through open terrace doors, stirring the sweet scent of jasmine from the candelabras.
Two wax nymphs stood at the bar, glass eyes shining bright in the candlelight, pliable fingers wrapped around flutes of pink champagne. Lit cigarettes burned in ashtrays. From behind the bar, a winged monster served drinks.
In the center of the ballroom, two gargoyles held a pose as if they were dancing, their waxy bodies closely pressed together, their reflections glowing in the mirrored ceiling. From the old phonograph in the corner, the hypnotic music played.
Tess gasped, her hand clasping her mouth. “Oh, my God!”
Mike raised his gun, circled the room. “Come out with your hands up. Hancock County Sheriff. Put your hands where I can see them.”

Congrats to Sharon on an excellent review already! Woot!

My best to Sharon. Her new release looks awesome. Definitely a must buy.

Sharon, I wish you every success in your new career and with your book. I admire a person who masters the art of determination.
Sarah

Looks like a good one, Sharon. Best of luck.

Sharon,
I loved the excerpt. Congratulations on your new release. I pray for your recovery.

What an intriguing story! I'm definitely going to have to pick up a copy. My best to Sharon. I'm keeping you in my thoughts and prayers.

I'm a Sharon Donovan fan and I hope good friend. I've continued to pray for her speedy recovery, and having you do this Cate is...well it's just very Cate Masters.

Congratulations to Sharon on her release and review, and most of all for having friends like you.