In the Author Spotlight: Jacqueline Paige

Cate: Please welcome Jacqueline Paige. Jacqueline, will you please share a short bio with us?
Jacqueline: I live in Ontario Canada and expect the snow to fly at any moment now. I like to think I’m a world class multi-tasker. With five children, a café to manage and my over active imagination quite often I’m working on four things at the same time. While I’ve only been a published writer for a little over a year now, I have had six books published in that time and have four more coming out in the next five months.

Cate: You're one busy woman! Congrats. Tell us about Mystic Perceptions and where it's available.
Jacqueline: Mystic Perceptions is the first story in the Hidden Senses Trilogy. I went outside of my usual witches/curses and magic area and took seemingly normal people and gave them a little something extra.
It’s available at Class Act Books in several formats including print.

Cate: Please tantalize us with a story blurb or excerpt.
Jacqueline: Here is the blurb: 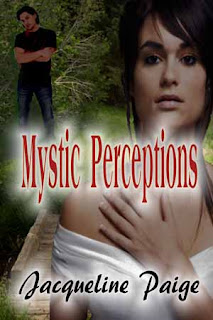 Jacinda Brown keeps to her safe existence doing investigative research, avoiding people and places with people. To most, it appears she has a normal life; blending completely undetected in her lonely continuation. She doesn’t investigate people; she can’t get that close. Through her hand she can feel emotions, thoughts. With a touch she can see what has been.
Unfortunately fate tosses her into a situation where her carefully guarded secret and her own conscience are at war when she finds herself working with detectives to find a killer. Jacinda clashes with the very strongly grounded detective, Reid Merritt, destiny has forced her to work with. At some point he begins to matter, making her decision harder. Will he look at her with abhorrence, like she’s some sort of freak when she’s through?
When the fifth murder happens, Jacinda makes the decision to use her gift to find the killer. She doesn’t let herself think of how she’s going to suffer afterward, the consequences that will curse her again, the chance she’ll be giving up everything and starting all over. She just thinks of finding some justice and stopping a killer.
What will be the price, this time, for the ability she doesn’t want?

Cate: What inspired you to write about the theme?
Jacqueline: My own ‘what if’ imagination began the idea for this trilogy. After having a frustrating trip to the mall – where I live you drive an hour to reach a mall – I gave up after being stuck in a long line behind people that did the strangest things. At one point I’m wishing I could somehow see what these people were thinking, you know just get inside their head for a moment.
So on the hour long drive home, my mind started coming up with abilities that characters could have. Jacinda was born then with her ability that she really wishes most times she didn’t have.

Cate: How do you develop your plots and characters?
Jacqueline: I don’t seem to have a consistent way of doing this. With one story the characters will just appear to me, usually a particular scene and then I have to figure out what the plot is around this. (Salvation is a good example of this, the opening chapter came to me all at once and I spent several days trying to figure out what the man in that chapter’s story was)
Other times my muse will upload a whole plot into my imagination and I have to then figure out what sort of characters I’ll need to begin to put it on paper.

Cate: Do you feel as if the characters live with you as you write? Do they haunt your dreams?
Jacqueline: Yes. I wouldn’t say they haunt my dreams, more like they prevent me from sleeping. It never fails while I’m in the middle of a story, I’ll fall into bed almost asleep before I get there and just as I’m starting to drift off a scene will start running through my mind. I have learned the hard way also that if I don’t roust myself enough to jot down a few key words or sentences before I do sleep – I won’t remember one piece of it in the morning! 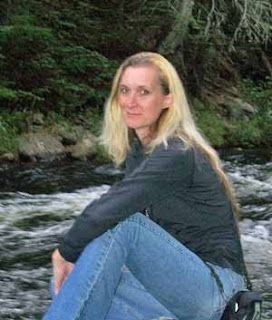 Cate: What's next for you?
Jacqueline: I actually have another release coming out on the 7th at Eternal Press. Salvation “Two centuries of not existing is about to change…”
In the next five months I have four more books coming out and also have three WIPs on the go right now.
The first in my Animal Trilogy – Animal Heart
The Witch Within
And I’m finishing up the second story in the Hidden Senses Trilogy – Dream Visions
I can’t remember what ‘spare time’ felt like, but I’m not about to complain.
Cate: Any other published works?
Author: I have a two part story at Amira Press: In Our Dream and From A Dream
My spicy Halloween story is also there: Behind the Mask

Cate: What’s the most challenging aspect of writing? Most rewarding?
Jacqueline: I would have to say the most challenging would have to be doing edits. I’m not talking about deciding what stays and goes or the changes your editor needs to make. I’m talking about reading your story that many times. Roughly before ever submitting a story you’ve probably read through it (during and after writing it) at least, and this is probably still a little low, twenty times. When edits begin you go through it again anywhere from three to ten times – and this process is literally “one-word-at-a-time”. After that there is the galley and or final proof read. The last chance to catch anything that isn’t right…
I have learned that you had better love your own story or it will drive you nuts reading it over and over and over again. I’m quite excited when the first few edits arrive in my inbox – after that the enthusiasm dwindles a little each time. 
The most rewarding to me (aside from holding the book in print) would be when I get the cover mock ups. It’s thrilling to me to see my story with a face finally after all of my work. The cover artists are so talented that they’re able to take my description and make it come to life.

Cate: What’s the most interesting comment you have received about your books?
Jacqueline: I was told my writing was like a young Nora Roberts.
I’m still not sure if they meant my writing resembled her earlier work or they were referring to my age – but being put into any category with Nora Roberts thrilled me more then I can possibly express!

Cate: Who are some of your favorite authors and books? What are you reading now?
Jacqueline: Christine Feehan and anything she’s written. I especially count the days for the next books in her Dark series and Ghostwalker series.
Sherrilyn Kenyon and her dark hunter series.
Laurell K Hamilton and her Anita Blake series and Merry Gentry series.
Nora Roberts – anything she writes.
I presently don’t have a book started. My TBR pile is huge, but I’ve been a little busy with work, writing and promoting to actually open one of them. I like to sit and read an entire book in one sitting, so I need to find a few hours to hide from life when I do that.

Cate: Is there anything you’d like to ask our readers?
Jacqueline: Yes. I have been brainstorming on the final book in the Hidden Senses Trilogy – thus far any “ability” I’ve come up with for the character in book 3 seems … common … I’d like to hear some ideas on what the readers think would be an unusual ability to have that doesn’t necessarily have to be a welcomed one.

Cate: Follow Jacqueline's virtual tour for a chance to win a copy of Mystic Perceptions. Other giveaway goodies available by following her blog.
Thanks for being my guest today, Jacqueline.

Thanks again for having me here today, Cate.

Thanks for being my guest, Jacqueline! The girl on your cover reminds me of my cousin. I'd wondered where she went! lol

Always happy to find lost relatives and put them on my covers. :)

Congratulations on your book release. I love the paranormal. -laura