The legend of the Jack o'Lantern

Today the Halloween fun is split between my blog and Karen Michelle Nutt's, where I pose the eternal question: common household item, or instrument of magic? You may be surprised to learn which everyday items can be dangerous in the wrong hands! Visit Karen's blog to learn more. 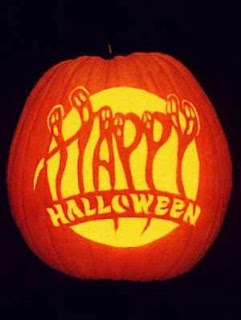 But before you go, pull up a pumpkin to hear the sad little tale of the Jack O'Lantern.

I love carving pumpkins at Halloween. These days, it’s become an art form. But its legend goes back to old Ireland, where a man named Jack resisted the Devil when he came to claim his soul one night. Several versions of the story exist, but most include the fact that Jack rivaled the Prince of Darkness in wit, and conned the devil into climbing to the uppermost branches of a tree on a dare. When the devil stood at the top and claimed victory, Jack carved a crucifix into the tree’s bark, and trapped the devil.

So Jack lived till old age finally claimed him, though spent too many nights at the local pub, and too many days as a trickster. When he reached the Pearly Gates, St. Peter turned him away. With only one alternative, Jack went back to the Devil. Satan never forgot the humiliation of that night, and refused to allow Jack into Hell too.
Poor Jack begged the Devil for a candle to light his way. Satan tossed him a burning coal before slamming the gates. Jack was stranded in the netherworld, all alone. He carved out a turnip to carry the coal, in a makeshift lantern.

After that, the Jack O’Lantern became the Irish symbol for a damned soul. People placed carved turnips them in windows with a lit candle to ward off evil spirits. After Irish people immigrated to America, turnips were difficult to find so they used pumpkins instead. Jack O’Lanterns still keep watch every Halloween, a night when spirits both friendly and unfriendly roam freely.

And if you see an autumn leaf fall from a branch on Halloween night, catch it quick – don’t let it fall! If you don’t let it touch the ground, you and your family will have good luck for a year. If it falls from your hand, the leaf loses its magic forever.

If Jack returned today, he might enjoy the ingenious ways people decorate them these days. If you haven't yet carved your pumpkin, here are some ideas ranging from whimsical to strange to humorous. 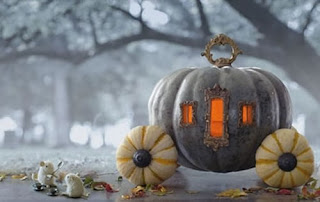 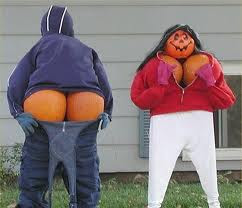 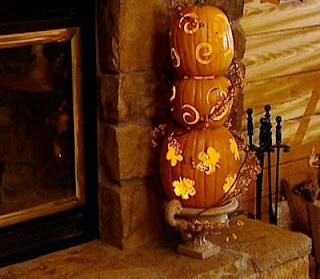 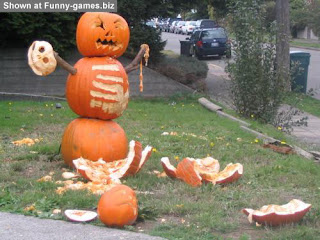 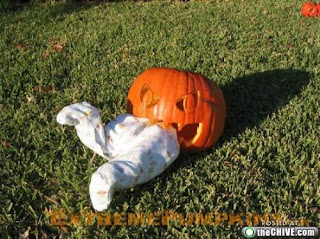 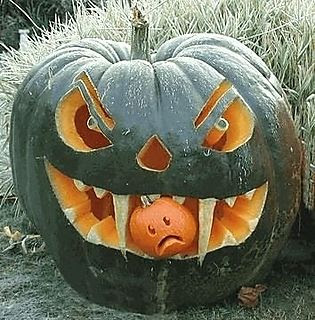 I'm not sure what it says about me, but the jack 'o lantern eating the baby made me laugh out loud.

I'd love to be at your house on Halloween. I'll bet your parties are terrific.

That made me laugh too, Maria! And the pumpkin eating the smaller one. My brother is very inventive that way - you should see some of his snow sculptures, they're amazing too.