In the Author Spotlight: Jerri Hines

Cate: Please welcome Jerri Hines. Jerri, will you please share a short bio with us?
Jerri: Hi! Thank you for having me. I started writing ten years ago after my children were in school. I quickly discovered writing became an obsession. I love to write. My first book, Dream Walker, was published with Wild Child in 2008. I live in a small South Shore town in Massachusetts with my husband of over twenty-three years, three children, two dogs and a cat.

Cate: Tell us about Patriot Secrets and where it's available.
Jerri: I'm excited about Patriot Secrets. Patriot Secrets was one of my first books. I loved the premise to the story. I love history and the American Revolution is filled with so many intriguing stories. When I read about the Culper Spy Ring in New York during that time, my head began swirling with what if’s. Patriot Secrets and the series developed from those what if’s.
I love to write about strong women, heroines who overcome adversity. Hannah made the perfect spy. Men during that time on both sides didn’t believe women capable of such deception. She was accepted by the Loyalists. She mingled freely in their society. And at the time she was spying, the British were arrogant, thinking that they would soon quiet the rebellion. But every step she took, every secret she uncovers, she endangered her life.
You can find the book at Wild Child Publishing along with other sites as well such as Amazon Kindle, Bookstrand, and All Romance ebooks.

Cate: Please tantalize us with a story blurb or excerpt.
Jerri:
It’s a dangerous game you set to play, Miss Corbett. One that can have far worse than deadly consequences!
In the midst of the struggle for America’s bid for Independence, Hannah Corbett makes a fateful decision, descending into a world of deceit. Spurred by revenge, she heads to New York, setting in motion a dangerous game for which there is no return. Searching desperately for the man who betrayed her family, she faces the cold and brutal reality of the life of a spy. Caught in a web of lies, living with betrayal, she is trapped. She has nowhere to turn except to a man it would be treasonous to love, setting duty and desire at war . Her heart is ripped apart when she must choose between the man who risks his career and life to protect her and the only thing that has remained constant in her life…her belief in her cause. 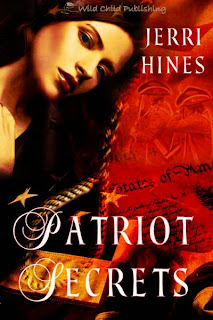 Within the early November morning air, Hannah had set to plant tulip bulbs outside her grandmother’s window. She wanted to surprise her grandmother in the spring with the emergence of flowers that had bloomed beautifully around her home in Williamsburg. She wondered how her home looked now. Her heart pained and with her manner in dealing with that pain, she pushed all it back within her. No, she told herself, she had a mission and had no time to grieve or her heart would rip apart.
“Hannah.”
Sitting upon the ground, she looked up. In front of her Marcus stood, dressed in clothing similar to when she had first met him. Was he going out again to deceive others into betraying their cause?
He smiled at her, a charming, disarming smile. He extended his hand to her. She pulled her gloves off, accepting his assistance. With ease, he pulled her up to him, much too close. She wanted to back away, but he held firm. His eyes lay intent upon her.
“I was looking for you. I didn’t mean to catch you off guard, but wanted a minute of your time.”
She dusted her skirt off and pushed back her unruly hair. “Of course not, but I’m sorry about my appearance, Marcus. I wasn’t expecting anyone this morning."
He didn’t reply. His fingers wiped her cheek where a streak of dirt lay. His hand lingered on her arm. She glanced up at him. He stared into her eyes. She wanted desperately to turn from his gaze, but wouldn’t show a sign of weakness. Her heart beat rapidly, but he said nothing.
“You’ve a purpose to this visit, Marcus,” she asked. “Or do you want to see Grandfather? I’m sure he’s within his study.”
“No, it’s you I wanted to see,” he answered under his breath. Suddenly, his hands went securely around her waist.
“Marcus,” she protested her hands against his chest. “Pray, what do you think you’re doing?”
“I find that I must once more depart. And I have only one question for you Hannah. Are you going to be here upon my return?” He drew her closer. His hand touched her cheek, easing behind her neck. “I wonder. I wonder if you will remember what it is like to have my arms around you as they are now. I wonder if you will dream of me while I’m gone.”
“Please release me, you arrogant man!” she pleaded. “Someone will see.”
“That’s no answer,” he whispered. She wanted to be able to jerk away and run, run far away from him, but she found she couldn’t move. His hand caressed her cheek, running down her neck. “You’re a strange one, Hannah Corbett. Why are you really here?”
“I have told you, my grandmother,” she murmured, finding it difficult to find her words.
He gently held her, but firmly. “I know what you told me, Hannah. How you wanted to leave before the invasion and would do so now if you could. It’s just…I imagine if you really wanted to leave, you would do so. I find it hard to leave you. I can imagine all sorts of trouble you could find yourself in.”
“I don’t believe it’s your concern, Marcus. I wish you well in your journey.” Her tone emotionless, she twisted, but his gripped only tightened. He pulled her to him. Her protests drowned as his lips came down hard upon hers. His mouth settled upon hers. She could feel a fire within him as his mouth claimed hers. And to her horror she found herself responding to him.
Her hands, which once pushed against him, trying to resist, opened freely and she pulled him to her. Her body betrayed her mind, melting into his, his touch, his kiss. His mouth kissed her cheeks, her neck, and back up to her lips again.
She couldn’t breathe. Her chest heaving, she finally broke away. Ashamed she responded so; she found she had no words. Oh what was she going to say that her body had so willfully denied with his touch. He caressed her cheek again.
“You make it hard to leave, Hannah Corbett,” he said softly. He gave her no opportunity to utter a response. He quickly kissed her lips once more. Then without another word, he departed.

Cate: Wonderful. Can you tell us why we're going to love your hero?
Jerri: He’s handsome, daring, and loyal. As Hannah is torn between her cause and love, so is he. Yet in the game the two play against each other, he finds himself in a position that there will be no winners.

Cate: Great tension. Tease us with one little thing about your fictional world that makes it different from others.
Jerri: I love being different! So many romances I read are set in England surrounded by lords and ladies. The American Revolution offered a taste of that world here in America. So many of the British officers of the American Revolution had aristocratic ties. The Aristocrats seemed to have different rules to live by than common people. Interesting because the Americans were fighting for the rights of all Americans to stand equal. I believe you will find that war of equality was also fought in their love lives as well.

Cate: What's next for you?
Jerri: I’m in the mist of revising Winds of Betrayal, the sequel to Patriot Secrets. I have two more books, The Sun Will Rise and Another Night Falls, set during this time period in Charleston (Charles Town).

Cate: What inspired you to draft your first story?
Jerri: My first story was a mystery when I was ten. I believe it was inspired by reading numerous Hardy Boy and Nancy Drew books.

Cate: Do you have a writing routine?
Jerri: I work overnights at a hospital. When I come home, I get a couple of hours sleep. Then I’m up writing while my daughter’s at school and hubby’s at work while everything is quiet.

Cate: Where can readers find you on the web?
Jerri: I have my website at www.jerrihines.com and blog www.jerrihines.blogspot.com .
But if you want to find me, I love my Facebook fan page- Novel Works by Jerri Hines

Cate: I love your FB fan page too. You do a lot to help promote other authors, including me - thank you!
Is there anything you’d like to ask our readers?
Jerri: I would love to get their feedback on my book.

Cate: Thanks so much for being my guest Jerri!
Readers, check Jerri’s web site for information on an upcoming giveaway!

Welcome Jerri! Your cover for Patriot Secrets is so striking.

Wow, Jerri! That is one beautiful cover! I couldn't take my eyes off of it!
I wish you all the best in your career!

Thanks! I do love my cover. I love the way so much subtly on the cover. Obviously the heroine, but also the hangman's noose, the Declaration, and the soldiers. Everything is connected to the story. And the cover is red! It's my favorite color. I couldn't have asked for more.

The cover is the first thing that pulls me in! Do love the cover! Good luck with the book!

Your book sounds very exciting, Jerri. Good luck with it.

Thanks, Cate, for having me. Love your blog. And appreciate the thoughts.