Do you recall the most famous reindeer of all? 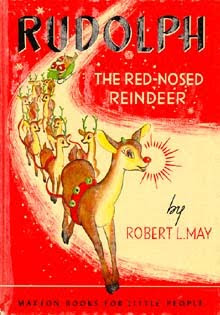 Reposting this from last year. Maybe I'll make it a Christmas Eve tradition. :)
The story of Rudolph's circulating as an email forward, so I thought I'd look into it. I should probably work for Snopes, lol.
While some of the email is true, it doesn't give the entire background. But I will. :)
Btw, I think my mom had dog-eared sheet music with this same image - supposedly the original 1939 cover. Though it's a little before my time, I remember it distinctly.
The Montgomery Ward department store's holiday tradition was to hand out specially printed coloring books to kids who came to visit Santa. In 1939, the store execs decided to try something different, and more economical because the Depression still gripped the nation. Rather than hire an outside firm to create a giveaway, they asked their advertising department to come up with a giveaway.
In turn, the ad department turned to their copywriter, Robert L. May. May worked on the story in his office, then took it home to read to his four-year-old daughter, Barbara. The little girl's feedback helped shape the story line, and she may have even named Rudolph.
Using rhyming verse, May's wrote the story of a little reindeer with a bright red nose who was born to ordinary parents in the woods. Like May as a child, Rudolph was lonely and had few friends. But, rather than dwelling on his problems, Rudolph had a positive outlook and did not let his unique nose hold him back.
In the original story, Santa discovered Rudolph on Christmas Eve while delivering gifts to the woodland animals. A fog rolled in and grew dense so Santa couldn't take off safely. Santa noticed Rudolph with his shiny red nose and asked him to lead his sleigh (I know, without any training. The reindeer union probably filed complaints.)
Well, you know the rest. All the other reindeer loved him after Rudolph saved the day.
Montgomery Ward certainly loved the results. Kids all over the country fell in love with Rudolph too, and the store handed out 2.4 million copies of the book. Because of the war, paper supplies were limited, and Montgomery Ward was limited to printing 6 million copies by 1945. 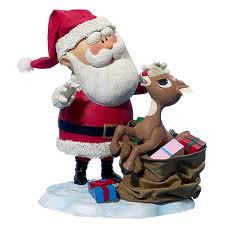 Though the hopeful story may have inspired his small daughter in a difficult time, the story's success didn't help Robert L. May's personal life. His wife died of cancer, and the medical expenses ruined him financially. He made no profits from the popularity of Rudolph, deemed a "work for hire" production, owned solely by Montgomery Ward.
By 1947, May decided to seek the rights to Rudolph. Surprisingly, Montgomery Ward sold them to him. May then published the story, which of course became a bestseller. He authorized a cartoon version for showing in theaters before the advertised movie. May teamed up with his brother-in-law, songwriter Johnny Marks, who changed the story slightly from May's original to the story we know today in the song. In 1949, Western singer/actor Gene Autry agreed to record the song, which became an instant hit.
Finally, May was able to enjoy the benefits of his labor. And kids - and grownups - everywhere still love the little reindeer.

I never knew the entire true story. My dad had one of Gene Autrey's albums. We loved listening to it as a child. Merry Christmas. I'll see you Monday on my blog.

Looking forward to it Susan! Have a very merry.