Stephanie Taylor in the Author Spotlight

Cate: Please welcome Stephanie Taylor. Stephanie, will you please share a short bio with us?
Stephanie: I wrote and illustrated my first novel at the young age of six. It was called The Bear Who Ate Christmas. I still have it in the attic somewhere. I’ve written two novels, Doubting Thomas and Tinseltown. I also have a Valentine’s Day short coming out next month with Decadent Publishing. I’ve been married for almost 10 years, and am a mother of a 4, 3 and 2 year old. I recently opened up my own epublisher for non-erotic work, called Astraea Press.

Cate: Wow, what an exciting venture. I hope to hear good things about Astraea Press in the future. Best of luck.
Tell us about Tinseltown and where it's available.
Stephanie: A-list actress Deb Atkins hasn’t allowed her glamorous lifestyle to go to her head. She owes this to her wonderful family, who keeps her grounded. So, for Deb, not just any man will do, especially if he’s part of the Hollywood elite. Most actors have one thing on their mind, and happily ever after isn’t it.
Until she meets Zach Sparks, her new co-star.
Zach Sparks is famous not just for his acting skills, but his quick wit and good looks. One glance at Deb, and he's smitten. After a drunken night at a Vegas premiere after-party, one thing leads to another. The result: marriage.
Deb is appalled by her actions. So much so, she and Zach can't get along on the set. Their director demands they spend Christmas holidays together to work out their differences or they're both fired. Driven by selfish motivations, they don't expect to fall in love over Christmas or for their marriage to turn into a real one. But can their tenuous relationship withstand a bigger test than either of them ever imagined?
It can be purchased at Lyrical’s website here
Or on Amazon here

Cate: Sounds great! Please tantalize us with a story blurb or excerpt. 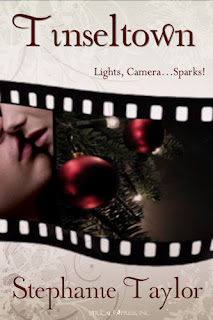 Stephanie: Here’s an excerpt:
“You first,” Zach said with a grin. Seeing the engagement ring on her finger, even now, sent a surge of protectiveness through him. He couldn’t wait until she sported it proudly in public. Would they ever get there?
Delicately, Deb opened the gift. She bit her lip as everyone watched in anticipation. “You really shouldn’t have done this,” she muttered.
“I could say the same for you.” He lifted his gift slightly. She shot him a wry look and opened the velvet box.
Deb gasped and tears shone in her eyes as she revealed a matching wedding band made of diamonds and emeralds.
“I didn’t mean to make you cry,” he whispered so the others wouldn’t hear.
“No, this is just so beautiful!” She fingered the band gently and looked up at him. “But what does this mean, Zach?”
“It doesn’t come without strings, Deb.” His serious gaze caused her expression to sober.
She pulled him closer so they stood face to face. Wrapping her arms around his shoulders, she rested her cheek next to his. He pulled her against him and inhaled deeply. This was exactly how he wanted to feel the rest of his life.
Deb pulled back and looked up at him. “I don’t need fancy diamonds to be happy.”
Zach watched her, wanting so badly for her to love him. “This just makes it official.”
She grinned, but only a small one. “I’m confused.”
The room was so quiet, a pin could ping off the carpet and sound like a bell toll. It dawned on him with everyone standing around it felt like an intimate wedding. Zach never even thought to ask Deb if she regretted not having her family there.
But he would give it to her now on Christmas, at four in the morning.
He settled his gaze on her neck and toyed with a strand of hair, afraid he might tear up and cry himself. “What do you say, Deb? Will you wear these rings to remind you of how much I love you?” Zach glanced back into her eyes only long enough to make sure she knew he meant it. “Will you be my wife?”
Deb’s gaze settled on his lips. He touched her cheek, the skin velvet underneath his fingertip.
Looking out to her family, she seemed to realize his intentions.
Her eyes returned to his. “I will,” she murmured.
Zach looked around for the ring and Eric wheeled it over to him. They watched as he slid the band on her finger, pushing it to rest against the diamond he had given her the previous night.
He shrugged. “We’ve kind of done things backward, so I guess the fact your rings are on backward is fitting, huh?”
She closed her eyes, a soft smile curving her lips and entwined their fingers.
“Kiss the bride!” Deb’s father called out.
Deb slowly looked up and saw they stood underneath the mistletoe. She cocked her eyebrow. “I told you watch out for the mistletoe.”
Zach laughed. “Not a chance.”
In a dramatic gesture, he dipped Deb and met her lips halfway. When he was done, he settled her on her feet as they laughed.
“Now open your gift,” she said when she pulled away.
Only he didn’t have to open it to know the greatest gift was right there in his arms.

Cate: Loved it. Can you tell us why we're going to love your hero?
Stephanie: Ooooh, Zach was so fun to write. I love a good alpha male that hides his doubt with a sense of humor. In all my other previous works, I just hadn’t put enough humor into my characters and Zach took me by surprise. I kept trying to straighten him up but he’d give me a witty retort every time. Zach is the kind of man every woman would want: sexy, funny, romantic and it doesn’t hurt that every woman in America wants him. He’s an actor after all!

Cate: He does sound delicious! Tease us with one little thing about your fictional world that makes it different from others.
Stephanie: I might get a solicitation for someone to be my shrink after this but I talk to myself when I’m writing. It’s pathetic, but I like to think it makes my dialogue more believable. ;o)

Cate: What's next for you?
Stephanie: I mentioned above I have a Valentine’s Day story (still untitled) out with Decadent Publishing next month. Jason and Liz are also two characters who can’t stop fighting and barking at each other long enough to realize they’re in love. But they have a history, so it was fun to write them. My next novel, Lucky for Her will be out sometime next year.

Cate: Congrats! What inspired you to draft your first story?
Stephanie: I don’t even remember my first story! I’ve literally written all my life. But the first novel I actually completed was inspired from the TV show ER. I was in love with Noah Wylie and wanted to create his twin on paper. But FYI, that story will NEVER see the light of day!

Cate: Do you have a writing routine?
Stephanie: Put on pjs, plug in netbook, type until I can’t stay awake anymore.

Cate: Is there anything you’d like to ask our readers?
Stephanie: With the holidays upon us, I’d love to hear what you like to read this time of year!

Cate: Readers, Stephanie is giving away a .pdf book to a random commenter... so start commenting. She'll pick a winner on Thursday, December 23rd around noon EST.
Thanks for being my guest Stephanie! Best of luck with all your projects, and happy holidays!