Cate: My name twin Cate Peace is here to join the party! Cate, please tell us a little bit about yourself.
Cate: Why thank you, Name Twin! I am a Louisville-based author of erotic romance whose books seem to always come out in the season opposite of their settings. This Time Next Year, my winter romance, came out in July 2013 and Complete Me, a summertime story that takes place in Charleston, SC, came out in April 2014. Okay, so that last one wasn’t too bad, but I’ve experienced snow in April, so I’m sticking by this. I also enjoy video games, reading (of course), long walks on the beach….

Cate: What do you love most about Christmas?
Cate: Being with family. My parents, sister, and I all live in different places, and Christmas is the one time of year where we’re guaranteed to be together.

Cate: Nice. Do you have a favorite memory of a Christmas past?
Cate:When I was in the eighth grade, my parents decided they wanted a real Christmas tree (this was before we knew I'm highly allergic to pine and how we found out, incidentally). My dad had this POS Ford Ranger that was older than me and had as much work done as Joan Rivers, God bless her soul. So we decided to brave the freezing cold and snow to chop down this tree.
Dad's truck had a bench seat and barely enough room between the back of the seat and the back of the cab for me to huddle. Not super terrible, but definitely not comfortable, either. The trip up to get the tree was pretty uneventful. Being hearty mountain folk, we went into the woods behind the mine where he worked to cut the tree down. So far so good.
We started our descent down the mountain. No big deal. For the POS the truck was, it had great tires.
So great that one of them tried to roll home without us.
As we were driving down the road, I felt a sort of bump and then a vibration under my butt. My mother squealed, and I got up in time to watch the tire roll in a perfectly straight line for about 500 feet or so, until it made a beautiful right turn into a field. Didn't use its blinker, though, so points off for that.
To this day, we still discuss the tire incident.

Cate: Oh no, sounds like a day-long tree expedition, lol. If Santa could grant one wish, what would you ask for?
Cate: Apart from the requisite world peace and homes for all pets, I’d say a full year to focus on writing and writing only. No job, please and thank you.

Cate: Ah, yes. What was the best gift you’ve ever received? What made it so special?
Cate: Honestly, there have been so many over the years I’d be hard-pressed to pick just one.

Cate: Any favorite Christmas recipes you’d care to share?
Cate: My family is a big fan of my sweet potato casserole. It’s pretty sweet, so I’d suggest adding the sugars more to taste, but here are my instructions:

Instructions:
Preheat oven to 350 degrees
Drain the yams and mash them in a mixing bowl.
Add sugars, condensed milk, extract and cinnamon and mix together
Butter casserole dish and add mixture
Bake for 30 minutes

It might sound kind of weird, but it is DELICIOUS.

Cate: Sounds yummy, actually. Tell us about your latest release, and where readers can find it online.
Cate: My latest release is part of Fated Desires’ new Give Me a Taste line. It’s a paranormal foodie romance called Ember’s Secret and release Feb 3rd. Right now, though, you can preorder it at Amazon, iTunes, Kobo, and Google Play.

Cate: Care to share a blurb or excerpt?
Cate: Always!
Blurb: Ember only wants two things out of life: to be reunited with her sisters, and to see people come back to her café. Catering to people she never sees again, she experiences a loneliness that can’t be filled. As one of the last Whakamanu—a descendant of the Maori bird-god Tane—she has to hold on to the secrets of her tribe. Family first.
Gourmet TV personality Austin Garten, host of the popular show Back Road Eats, needs more in his life thanBreadbasket America grilling. He’s tired of the safe routes, the easy and dependable foods that the Network loves todisplay. When his RV breaks down in Wyoming, and he learnsabout Kai, a Maori restaurant outside of Casper, hisinterest is piqued. Once he meets the proprietor, he realizes he wants more than just her food. He wants her.
Ember isn’t too sure. The Solstice, the Maori New Year, is fast approaching, and with the heat in her kitchen ratcheting up, she knows she can’t keep her secret for long much longer. But will Austin be able to accept her? Or will her secret drive them apart?
Excerpt:
Standing, Austin extended his hand and introduced himself and the others. “I’m the host of Back Road Eats on GourmetTV, and I would absolutely love to do a special on your restaurant.”
Her eyes widened, and he studied them for a moment, searching for a sign of contacts. Nothing. Those orangey eyes were real.
“You want to do a show about my café?”
“I think I need to do a show. Why don’t you join us and tell us a little about yourself?”
“I…well….” With a shrug, she pulled out the empty chair next to his and sat down. “Not like anyone else is here, right?”
“Maybe we can change that.” 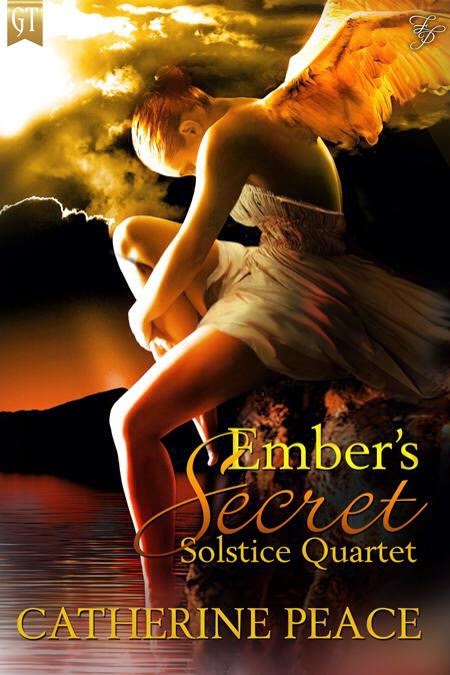 “I would like that, but please eat first. Your food will get cold.”
He returned to his bread bowl of stew. Under her watchful eye, he picked it apart like he had the lamb and detected hints of the kawakawa as well as more common herbs like bay and cilantro. Earthy flavors. With his spoon, he cut into a chunk of pork; it fell apart in the broth. Perfectly tender. Then he took a small bite of the sourdough bread, potato from the taste of it. He hadn’t had potato bread in years. “How long do you let your bread mixture ferment?”
“For the stew, a couple of days. I don’t want the bread to overwhelm the stew; it’d be too much. However, for the French toast I do in the mornings, I have a sweeter version I think you’d like.”
“You make breakfast, too?”
She nodded. “It’s mostly brunch now. I still come in early to bake bread, but since Im in the middle of nowhere, I don’t see many people.”
“Damn shame,” Joel muttered through his potpie.
She smiled, and Austin’s temperature rose a few degrees at the sight. Damn, she’s gorgeous. He wanted to continue dissecting the stew, but hunger got the better of him.
“How’s your chicken?” she asked Ray.
“Pretty sure it’s the best thing I’ve ever had, and for a guy who eats for a living, that’s saying a lot.”
“Is there anything else you guys want to try before you hit the road?”
“Actually we’ll be sticking around for a few days at least,” Austin explained. “Our RV broke down a couple miles from here.” Best RV breakdown ever.
Her eyes lit up, and he could swear he saw a fire in them “That’s…well, not great, but....”
“It’s worked out good so far.”
She chuckled and ran her fingertips through a chunk of hair. Now, he noticed the way the light danced off it, as though it were made of flame. “So you’ll come back?”
“Sure thing. For however long we’re here.”
After she considered for a moment, she said, “If you’re interested, I can make a couple of things that aren’t on the menu. Some traditional dishes from my mother’s recipes.”
“That would be great. Honestly, I haven’t had food as good as this. I’d like to taste anything you offer.” Smooth, dumbass.
If she noticed the completely unintended innuendo, she didn’t show it. “Okay. I’ll work on some things tonight. Come back in the morning, and I’ll have some doggie bags made for you.”
“We’ll be here,” he answered a little too fast.
Ember nodded. “Bring your appetite.”
Oh, he would.

Cate: Love it. Love that fantastic cover too! What inspired you to write about the theme?
Cate: It started with wanting to write something different, and in all honesty, I hadn’t seen many swan shifters in the book world. Plus Carrie Ann Ryan, awesome author/half of the amazing Fated Desires duo, is a good friend of mine and I kinda wanted to impress her. So I started digging, and found so much more than I anticipated. For instance, Whakamanu is actually a Maori word that means, “One who transforms into a bird.” I could not ask for more than that. The book pretty much wrote itself after I got into some pretty awesome research.

Cate: Very cool. Anything else you’d like to share?
Cate: Other than “Please buy my book?” Just kidding. I had a lot of fun on the blog today, Name Twin! Fated Desires’ lines have Goodreads pages and we’re planning a kick-off Facebook partay from January 2nd to the 4th (which, incidentally, is the day I’ll be getting my first tattoo ever). So please come hang out with the Fated Desires authors and learn stuff and thangs about the new lines!
Also, hope everyone has a safe holiday season!

Cate: Thanks so much for being part of the 12 Days of Christmas, Cate (sounds weird saying that, lol)! Hope you have a wonderful holiday!

Very nice interview, Cate. Er...Cates. I enjoyed the excerpt and love the cover. Best of luck.

What a beautiful cover! :)

I have never had a sweet potato casserole. Sounds tasty!
~Jess