One of the down sides of having a February birthday is that it's tough to get dinner reservations. On the up side, I share my birthday with some cool people:

It's a wild and crazy party when we all get together. 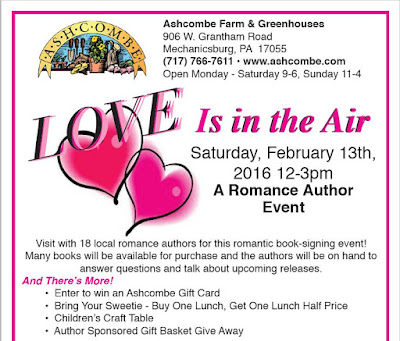 And tomorrow, I'm joining more than a dozen other authors at Ashcombe Greenhouse in Mechanicsburg, Pa..

What better way to combat the polar vortex than with books and chocolate in a cozy greenhouse surrounded by blooming flowers and green plants?

The full event description is here in PDF form. Hope to see you there!

A huge THANK YOU to Cate for allowing me blog space to share some exciting news. Kensington Publishing is doing a Goodreads Giveaway for a paperback copy of my upcoming release, A THOUSAND YESTERYEARS. There will be two—count ‘em two—winners. The giveaway is open now through February 29th (how cool, a leap year). If you’re interested, you can enter here:

A THOUSAND YESTERYEARS is a tale of mystery and suspense centered around events that took place in Point Pleasant, West Virginia. You’ll discover a small river town plagued by tragic history and rumored sightings of the Mothman—a terrifying creature said to haunt an abandoned WWII munitions site. 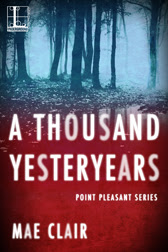 A THOUSAND YESTERYEARS releases on April 26th, but the ebook version is already available from Amazon and all other major book sellers. If you’d like to pre-order you can find a complete list of links here.

In the meantime, I invite you sign up for the paperback giveaway at Goodreads and tell your friends! The Mothman Cometh!

Author bio
Mae Clair has been chasing myth, monsters and folklore through research and reading since she was a kid. In 2013 and 2015, she journeyed to West Virginia to learn more about the legendary Mothman, a creature who factors into her latest release.

Mae pens tales of mystery and suspense with a touch of romance. Married to her high school sweetheart, she lives in Pennsylvania and numbers cats, history and exploring old graveyards among her passions.

Congrats to Mae on her upcoming release!
I am a huge fan, and can highly recommend her books.
So don't hesitate to enter the Goodreads giveaway! Good luck!