Being focused on pushing forward to new and exciting story horizons, I don't like going back to revised old stories.

But, as the blog post title says, never say never.

When a publisher put out a call and the submission guidelines specifically included previously published stories, I had two novels that fit the other specs. Well, after a few tweaks.

I've spent the past month or so revising them both. I was going to merely sub the revised versions, but liked them so much better, I published the new versions on Amazon and Smashwords. Once they go through the review process, Smashwords will release the updated version to its secondary affiliate sites such as Barnes and Noble, etc.

Fear not, I'm not going to be one of those authors stuck on their old stories, constantly updating the old with new versions. How many versions of one story can anyone read?

But I promise, these two are much better stories for the revisions.

That leaves only one more to finish. The Vitruvian Man trilogy of novellas (Cursed, Charmed and Claimed) will become one full-length novel. It's taken me forever because not only did life keep getting in the way, as so often happens, but the main character will undergo some major changes, and the story's going to go into more detail, as well. I'm hoping to finish that by the end of the year. 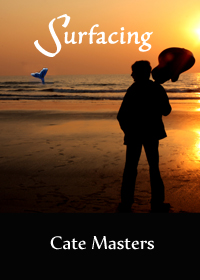 In the meanwhile, I hope you'll try the new and improved stories!

Surfacing is my contemporary fantasy, a 2009 Amazon Breakthrough Novel Award semi-finalist. The story follows a mermaid who meets and inspires a wannabe rock star. Set in Weeki Wachee Springs, home of the Weeki Wachee mermaids!

You can view more detail on Smashwords or Amazon. 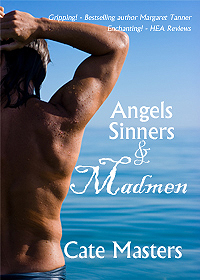 Angels, Sinners and Madmen is my historical romance, an adventure that I couldn't resist after visiting Key West and learning about the wreckers.

More deets on Smashwords and Amazon.

The fact they're both set in Florida is a happy coincidence. Or maybe Florida is a writer's muse? I did visit Ernest Hemingway's house while in Key West... maybe his ghost followed me home!


Posted by Cate Masters at 7:15 PM No comments:

Cate Peace: Why Worldbuilding Is the Secret Ingredient

Ever read a book and wonder how the author created such an incredible, engrossing world? Do you want to BE that author?
​
Writing is a lot more than just Characters + Dialogue + Action = End. For genre writers especially, worldbuilding is a critical skill that will help you create a world that jumps off the page and into your reader’s mind.

How do you get there?

Where do you start?

Worldbuilding is one of the most intimidating aspects of the writing process, but it doesn’t have to be. In Why Worldbuilding (is the Secret Ingredient): The Complete Beginner’s Guide, Catherine Peace, author of books like Gemini—a science fiction romance featuring a universe built around giant cats, Chuck Norris facts, and aliens galore—will guide you on the journey from creating bland settings to vibrant, believable worlds for your characters and stories to inhabit.

Starting October 16, you'll get your chance to learn about one of the hardest and most rewarding parts of the writing process: Worldbuilding. Using examples from some of science fiction and fantasy's best known worlds, you'll gain the tools and insight you need to create your own.
Once you’ve gone through the course, you should be able to:
Over the five-week course, we’ll explore some of storytelling’s lushest worlds—from Westeros to Hogwarts with a few unexpected stops in-between—and break them down into easily digestible concepts you can use to beef up your stories and give them the punch that will set them apart. BAM!

Each class is $30, or you can complete the set for $130. Registration is open through September 15. Don’t miss out on your chance to take your worlds from bland to BAM!

About the crazy person running this shindig:

Catherine Peace has been telling stories for as long as she could remember. She often blames two things for her forays into speculative fiction—Syfy (when it was SciFi) channel Sundays with her dad and The Island of Dr. Moreau by HG Wells. She graduated in 2008 from Northern Kentucky University with a degree in English and is still chasing the dream of being super rich and famous, mostly so she can sit around in her PJs all day and write stories. When not being a slave to the people in her head, she’s a slave to two adorable dogs.