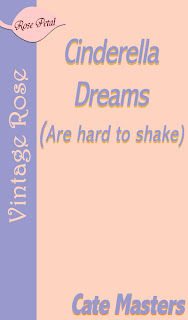 A free read
in ebook
from The Wild Rose Press

Jenny loves being a wedding photographer, but not when her ex-boyfriend Jerry’s getting married. It’s tough to do her job when she imagines herself on the altar next to him. Can she ever shake loose of those Cinderella dreams, or will they finally come true?

Excerpt
As I folded my tripod, the bride touched my shoulder.
“Thanks again for doing this on such short notice. Jerry said you were a great photographer. We should have planned the wedding for next year, but we just couldn’t wait!”
Beautiful and nice. No wonder he’d fallen for her.
I forced a smile. “You’re welcome. Break a leg. I mean, best wishes.”
Swallowing my embarrassment, I followed the hallway to the side entrance of the altar. Steadying the tripod, I repeated my mantra: It’s been a year. Get on with your life.
When Jerry walked in from the back of the church, my heart flip-flopped. His black tux looked custom-made, and showed off his six feet of muscles. He must have joined a gym. I wished I’d been more faithful with my Jane Fonda workouts.
My cheeks went hot as he came toward me, and I fiddled with the camera to cover.
“Jen.” Just hearing him speak my name could send me over the moon again.
I smiled, hoping I seemed as unaffected as he did.
A voice behind Jerry said, “Hey, Jen.” The best man, taller than the groom by two inches. Slimmer by a few inches, too. His hazel eyes sparkled as he smiled.
“Tim! You’re back.” I hadn’t seen Tim in a year. When Jerry broke up with me, it had been a double tragedy. Tim and I were buds, and sometimes he hung out with me more than Jerry. He’d moved away right before Jerry dropped the bomb on me.
Tim locked his gaze on me. “Good to see you.” Normally, a throw-away phrase people say just to fill in the blank, but he said it with feeling.