The Duende and the Muse - Contemporary short fantasy 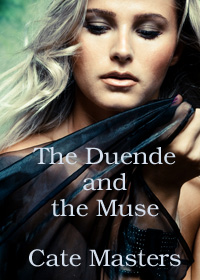 The Duende and the Muse
Available in ebook on Amazon Kindle and at Smashwords
Melinda the Muse is frustrated with her student. He isn't writing much these days. At the annual MuseFest, held in a fantastically colorful cloud, she hopes to get new ideas to inspire him. When Devon the duende shows up, is he there to steal her student, or her heart?
Reviews
I thoroughly enjoyed this short story! Melinda's hopeful ideals were consistent, if a bit misguided, and Devon's contrasting style added excitement. The characters were believable, and the settings were described clearly and were easy to visualize.
Bitten by Books: 5 Tombstones
The Duende and the Muse may be short, but it is well written and the story holds the attention from beginning to end.
Long and Short Reviews: 4 stars
The author weaves a great tale with a creative way of using words that makes the story refreshing to read.
WDRF Reviews: Memorable Good
...awe-inspiring...I love how Cate Masters could make two opposites work together. I love this short story.
Review Your Book

Excerpt
Melinda is startled when she notices a dark figure leaning against a booth across the aisle. He stands out like a charcoal etching against the background of soft orange and pink clouds – all harsh outlines and jagged features. Menacing yet compelling. He smiles, and lightning flashes from his dazzling white teeth, zinging through her.
She’s never seen a muse like him, but he must be one – otherwise, he wouldn’t be here. He wouldn’t be stepping toward her with the intensity of a jaguar, a laserlight in his eye, teeth bared in a hungry smile.
This guy looks like a Vanity Fair ad: layered hair mussed just so, sandals with a jacket and worn jeans that hug his contours as if tailored for him. She runs her hand across her belly to quell the tiny pinpricks. She’s been so busy with work lately, she hasn’t had time to meet anyone new.
“Who’s that?” Her wings can’t beat fast enough to cool the heat rising from deep within.
Calliope turns to Euterpe, her whisper harsh. “What’s he doing here so soon?”
Euterpe narrows her eyes at Calliope as if in warning, but coolly deadpans, “A duende. They’ll let anyone in these days.”
Something’s amiss. Melinda’s stomach tightens at the silent exchange between the two Elders, but curiosity wins out. A duende? That explains it. She’s heard of them – said to be a combination of charm, magic, inspiration, fire, magnetism – and demon. Muses were warned at an early age not to take up with duendes. Tales of muse-duende liaisons were fraught with disaster, downfall and disgrace – for the muse. Duendes managed to carry on unscathed, though their methods of inspiration could be deadly for their students.
The thought vanishes faster than a flicker of sunlight on water as he moves toward her.
“Hello,” he says, in a voice whose timbre resounds within her.
“”Hi.” She stares, entranced by his dark beauty.
His smile envelops her. “I’m Devon.”
She extends her hand. “I’m Melinda. So nice to meet you.” Fire sparks in her fingers as he takes her hand in his, and then leans to kiss it. A tingling crawls up her arms and neck into her head, where it scrambles her thoughts.
His gaze lingers on her lips, and they quiver open like a rosebud blooming in sunlight.
His voice is like a hot wind in the desert. “The pleasure’s all mine.”
Oh, she doubts it. Trailing a ribbon through her fingers, she asks, “Are you here for the entire weekend?”
His glittering black eyes wander across her body, sending a shiver of molten heat to her core.
Oh, she’s in trouble. Deep trouble.
A smile flickers on his lips. “Now I wish I were. I have other business, unfortunately.”
Her voice wilts like a thirsty flower. “I’m sorry to hear that.” She clears her throat. “You know, because the sessions look so enticing this year.”
“Yes, enticing.” He leans closer, close enough to kiss her. The center of his eyes swirl like a gathering storm.
“Melinda,” Euterpe croaks from a distance. “The first session is beginning. You should get a good seat.”
When had the Elder Muses moved away? Melinda calls, “I’ll be right there.”
Devon steps backward, one sandaled foot at a time. “Enjoy MuseFest. Maybe I’ll see you around.”
Yes, yes, please Zeus! “Maybe.” She scampers to catch up to Calliope and Euterpe, already at the tented area, where signs blink the schedule and announcements.
He’s still watching her. She can tell by the heat traveling up her thighs.
When it fades, she glances back. He’s gone.
The cloud feels so much emptier, though muses teem through the air.

Thanks to The Wild Rose Press for first publishing this ebook! I'm very grateful.
Posted by Cate Masters at 2:36 PM

Email ThisBlogThis!Share to TwitterShare to FacebookShare to Pinterest
Labels: contemporary fantasy, The Duende and the Muse, The Wild Rose Press