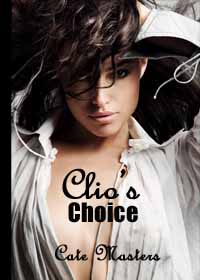 Re-released July 2011
in ebook
from Amazon and Smashwords
Clio’s honeymoon with Jon is paradise – until they return home, and Jon’s new client, Dion, usurps his time. Michelangelo’s David has nothing on godlike Dion, who charms Clio with his old-world ways. The more she’s near him, the more she forgets who she is. What – and who – she really wants. When Jon disappears, she learns Dion’s true identity, and must make the most difficult choice – a decision pending for centuries. Can she stay true to Jon, and to herself?
Reviews
Do you like a little mythology in your books? Then here is a good one for you. A nice SPICY read that is titillating, sexy and an ending that makes the journey worth the trip :) What a wonderful little read that is not the typical Harry met Sally, I enjoyed the drama, the lust and the issues right until the bitter end. This is not the first book of Ms Masters that I have been fortunate enough to read and let me just say that it won't be the last :)
Seriously Reviewed
This is an interesting and creepy tale. Dion and his Maenads will give you the chills right from the beginning of the story. The author does a good job of turning a Greek god into a successful businessman looking for love.
Coffee Time Romance – 3 cups

Casting Call - Who did Cate envision in these roles while writing this story? Find out here!

Excerpt
On the wall opposite his bed hung a portrait. The likeness stunned her. “Oh my God. How did you…?” When could he have had a portrait made of her?


“She’s my wife.” He sat on the bed and stared at the painting, his eyes like glass. “Ariadne.”


“Your wife?” She walked closer, the portrait almost breathing, as though she were looking in the mirror. “It’s amazing.”


“When I saw you, it was as if….” He lay back on the bed, laid his forearm across his eyes.


“Oh, Dion.” She sat next to him. Ariadne. She’d heard that name before.


“I miss her so terribly.” Pain cracked his voice.


He sat up and held her shoulders. “Ariadne. My princess.” His voice held an unfamiliar gruffness.


With one swift movement, he twisted her beneath him. “The Fates brought you back to me.”


The Fates. Ariadne. Dion…. Her mother had told her bedtime tales when she was growing up. The realization hit her. “Dionysus.” The God of the Vine.


It couldn’t be, didn’t make sense.


Hearing his true name, his face alighted with happiness. His mouth sought hers. A life force flowed from the portrait through Clio’s veins, overwhelmed her senses, as if she’d drunk a case of his wine. His wet lips traveled down her neck. The strap of her bathing suit fell away, revealing her breast. He suckled and nibbled at her. His fingers slid between her legs, his tongue tracing her ribs, then her hips.


With the wind in her long, mahogany hair and the moon through the palm trees, the drumbeats penetrated her luminously pale skin. She moved her feet like a tribal native, her arms and hands curved like flower petals, stronger than any hook, luring him to her. He moved like a matador to claim her.


Her unbounding love made her heart wild. She led him to their bungalow and shut the door on the last shadows of the day.


His tongue licked and teased. With a groan, she arched her back, inviting more, but wanting nothing of him. A swirl of thoughts stormed through her mind, fighting for dominance. Her writhing body screamed for completion. Her breaths came hard and fast, a wave of passion cresting within her.


He slid his leg across hers, then hovered above her. “You are my queen again.”


His words sobered her. Two desperate needs clashed within her, to reunite with a husband for whom yearning had surpassed sanity, and to escape, to find a husband she loved more than anything.


“I will do anything for you.” Her lips brushing his cheek, she whispered, “Anything.”


In the distance, the drums beat faster and faster.


Her words from her wedding night returned to her again: I will do anything for you. 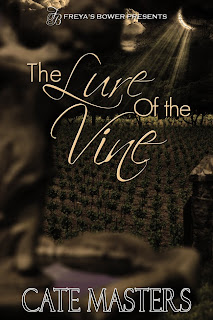 Thanks to Freya's Bower, which first published this ebook as The Lure of the Vine.
Posted by Cate Masters at 2:22 PM

Email ThisBlogThis!Share to TwitterShare to FacebookShare to Pinterest
Labels: contemporary paranormal, Freya's Bower, The Lure of the Vine