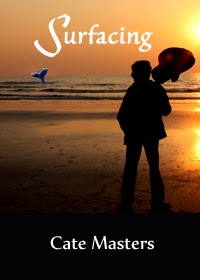 AJ Dillon is trouble. The former lead singer of an indie band has no home, no money and no future. His grandfather is the only relative willing to take another chance on him. AJ arrives in Weeki Wachee, Florida, with his guitar, a few clothes and a bad attitude. The only good thing about Weeki Wachee is the ocean -- the one place AJ feels at home.
Grandpa lines up a job for AJ at Weeki Wachee Springs, where beautiful women perform as mermaids. Grandpa says real mermaids exist, but AJ doesn’t believe – until he meets Cassiopeia. She helps his passion for music resurfaces. But greedy Chaz finds out about her, and threatens to kill them if AJ doesn't go along with his plan to make a fortune with a real mermaid show. Can AJ save Cassie, even if it means losing her?


Read the beginning chapters on WattPad
Reviews
Ms. Masters' writing style is smooth and effortless in Surfacing. I found myself drawn to her characters and their world almost immediately, and within a few pages I became completely lost in the story. Surfacing is a delightful, entertaining, and touching read that will have readers rooting for the young hero and hoping that somehow fairytales can come true. This is more than a romance: it is a coming-of-age story that will linger in my memory. I truly enjoyed every page.
Bookwenches - 4.75

Who would Cate cast in these roles?
Click here to see.


“Look out,” a woman screamed as the gator closed in.


Something slammed into his stomach and whooshed him beneath the water. A second slam, more like a thud, and he thought it was all over. For both of them. The thing gripped him without hurting him somehow, but moved so fast, AJ thought his body might break from the pressure of the speed. It felt like hurtling through the canal on an underwater express train, rolling as they went.


As his lungs felt near to bursting, they slowed and surfaced. Whatever held him released him by propelling him face-down onto a grassy bank.


Gasping for air, he scrambled up the side to escape it, but his arms and legs flailed, more spectacle than anything.


“What were you doing?” a girl’s rich, full voice asked.


He glanced over his shoulder, still grasping at the bank for leverage. He fell to the grass, stunned.


Instead of the ugly head of an alligator leering at him in a crocodile smile, the girl, even more gorgeous up close, leaned her hands on the bank and lifted herself up. Her wet hair clung to her chest and waist.


Too many questions flew through his head at once. “What?” he managed.


“You could have been killed. Why did you do that?” Her green eyes sparkled like emeralds flecked with onyx. Her long dark hair framed her porcelain face and rosebud lips.


His chest heaved. “You’re kidding, right? I saved you.”


Fascination turned to irritation. He risked his life for her. “What? That alligator would’ve killed you.”


This made her laugh all the harder, her laughter like a melody he couldn’t quite place, though familiar.


AJ glanced downriver to where the boat should have been. “What happened? Where’s the boat?” He held a hand to his head. He wished she’d stop laughing. The sound got inside his brain, jumbled his already knotted thoughts. And every time she looked at him, her eyes hypnotized him—their whites so clear and bright, the green shone like gemstones. Like no other eyes he’d ever seen.


Glancing upstream, she smiled. “Right where you left it.”


“No. I left it right there.” He still couldn’t catch his breath. Or his mind.


She twisted up and sat on the bank. “No, you left it around the bend. Remember?” As she turned her head, her hair shifted, revealing the curve of a breast.


AJ blinked, thinking his eyesight might have been affected by the impact. But he could see as clear as ever. The old biddy was right. “You’re not wearing clamshells.”


Her glittering eyes snapped to his. “What?”


His mind raced. If this girl was what he thought she was, he wanted to get closer. He slumped on the bank, letting his feet slide closer to her. “What are you doing out here? You’re not with the show.”


She tossed her head, and her hair swirled across her like a glossy curtain, tantalizing him. She edged toward the water. “No.”


The end of her tail rose, then swished beneath the canal. For a moment, he’d caught sight of it, the colors exactly as Grandpa had described: iridescent, ever-changing, like rich silk. He shifted closer for a better view. The transformation from skin to tail was seamless. Undetectable.


It was no costume. 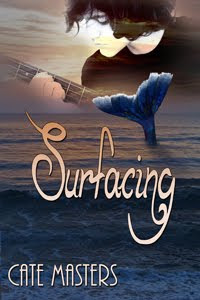