Writers know it’s important to take their readers on a journey – whether literal or metaphorical – and follow the standard story arc. It’s all about the story, but without interesting characters, you could have a Booker-worthy story line and end up with a ho-hum story if the character’s a two-dimensional bore.

Not to fear, there are plenty of resources out there. Writer’s Write’s Web Resources for Developing Characters provides links to everything from psychological tests to take from your character’s point of view to genealogy and baby name sites. Under the “Other Resources” subhead are links to specific professional resources such as WebMD, Experts Links and HowToWEb.com.

As Lee Masterson advises in the article, Creating Memorable Characters, your characters should be original. To expand on the fourth point of POV, also check out Marg Gilks’ Establishing the Right Point of View article. While some authors can get away with head-hopping, it can confuse readers. It’s always good to experiment, and I’m all for rule-breaking if it’s done well. But first, as they say, before you can break the rules, you gotta learn ‘em. Marg gives some good examples of how-to books to guide novices in POV, which can be tricky.

I include James Bonnet’s article, Great Characters – Their Best Kept Secret as a point of discussion. I tend to disagree with his point that your protagonist should be the “quintessential” example of a character type. Readers like characters they can identify with, root for and cheer on when the going gets rough (which it does, in most good stories). To me, a complex character is preferable. One who has a touch of hero and villain. Sometimes the journey is internal, and can be every bit as dramatic as the outward journey as say, The Lord of the Rings.

On an unrelated tangent, I'm including a photo of Chairman Maiow, my cat, just to dress up the post a bit. 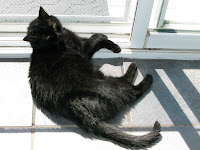