The Dancing Cats - A Modern Fable

In the middle of the last century, along the Japanese shoreline, the people of the tiny village of Minamata lived a simple life. Some were farmers, tending animals and fields. Many were fishermen.
Each morning, they set out in their small boats to bring in as many fish as they could catch and haul in from the bay. The villagers sold their fish, and also fed their families with their catches. They were thankful for a good meal. What they did not finish, they fed to their cats. Sometimes the village cats would snatch a fish from the docks. The cats loved the fish almost as much as the fishermen. 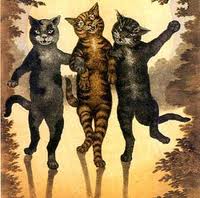 _________
The Japanese chemical company was Chisso.
The photographer was W. Eugene Smith, whose photos of Tomoko Uemura and other Minamata villagers poisoned by mercury forced the cleanup of the bay. He died of a brain hemorrhage.
In Pennsylvania in 2004, 45% of lake fish were found to exceed the safety levels for mercury. [“Environmental group finds mercury in 45 percent of PA's lake fish,” by Dan Nephin, AP, Aug. 3]
By March 2005, EPA is expected to loosen Clean Air Act standards for mercury emissions from coal-fired power plants. [ “EPA: Mercury plan would help kids and women, avoid coal politics,” by John Heilprin, AP, Aug. 10]
Posted by Cate Masters at 10:55 AM

Email ThisBlogThis!Share to TwitterShare to FacebookShare to Pinterest
Labels: fable, Flesh from Ashes, The Dancing Cats