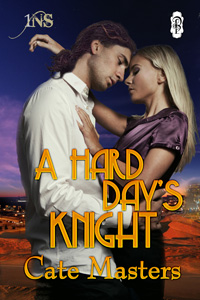 
Some days, it’s best to lay low. Lance Knight finds out the hard way – when he encounters his longtime foe, witch Morgan le Fay, at Medieval Merriment. Her curse kept him wandering the world for centuries. When he also meets Gwyn McCartney there through a 1NS date, he’s struck by her resemblance to his true love, Guinevere.  It gives him hope for the first time in centuries. First, he must face Morgan to break the curse, and he has only one hope: his sword, forged in the fires with Excalibur and imbued with magical powers by Merlin.


Gwyn McCartney’s had it with dating. Her friend’s setup through 1NS with Lance Knight irritates her, especially when Lance acts bored at Medieval Merriment – her employer and greatest fantasy. When a wench threatens Lance – a witch, he says – her fantasy world seems all too real. After Lance kisses her, she knows she has to battle Morgan le Fay. Can she free him, or will she lose him forever to the witch’s curse?

I love the idea of Camelot and the characters from that historic tale. A Hard Day’s Knight brings a modern twist to that tale. If you also enjoy Camelot and King Arthur, then you will enjoy the new take on the classic tale.
Sizzling Hot Book Reviews - 3

A fun short that relies heavily on Arthurian legend. Lance and Gwyn have a nice attraction and the action is page-turning. The romance develops very fast and the story in general hits the ground running. As this is a short, there is not much background, but Lance is intriguing enough that I would have liked to hear more of his story. Masters has put together a fun, sexy glimpse of a knight in the modern age.
Bitten by Books - 3

Casting Call - Who would Cate cast in these roles? Find out here.

Excerpt
She’d rocked him, body and soul. Possessed him so that he’d forfeited his honor. The stolen nights they’d shared haunted him, and he feared she’d returned to torture him again, ever out of reach. Trying to reconcile the vision in his head with the one approaching, he licked his dry lips.
The woman who haunted him was not the one who walked toward him.
Yet they were one and the same, he’d swear an oath.
Hands full with three tall glasses of beer, Darien returned and scooted next to Kurt. “Did you tell him?”
Kurt mumbled something and slurped.
“Lighten up, Lance, you look like you’ve seen a ghost.” Darien’s muted squeal heightened his attention. “Oo, here she comes.”
One of the three? Dread formed a cold pit in Lance’s stomach and he took the fresh mug of beer, tempted to apply its “lite” description to all of present day. With his luck, she’d be the raven-haired girl with the overbite. He detested women with dark hair. Brought back too many bad memories.
“Gwyn!” Standing, Darien waved.
The blonde waved back. Excitement coiled in Lance’s chest. He distantly registered Darien leaning against his arm, whispering something, and Kurt adding a comment and a guffaw. But the light glinting against her golden locks gave her an angelic appearance. He imagined his fingers working the laces along the front of her bodice, unfastening them, letting the full green skirt pool around her ankles to reveal that creamy silken skin he’d so missed. Craved.
Hitching up her gown, she glided toward them like a swan across a lake. When she fixed her green eyes on him, he scrambled to his feet, dumbfounded as a peasant before a princess.