Do you believe in luck? According to legend, seven is a powerful number.

It's been pretty lucky for me. I'm the seventh child of two parents of families of seven each. Among ancients, the seventh son of a seventh son was believed to be born with supernatural powers, a boy who would become a wizard when he grew to manhood. Likewise, the seventh daughter of a seventh daughter was believed to be born with gifts of prophecy and healing. Hopefully, in my case, it bestowed great writing powers upon me. :) 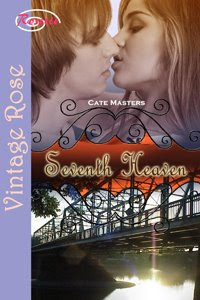 So it's no wonder I named my TWRP Vintage Rose Seventh Heaven. Set in my hometown of Lambertville, NJ and New Hope, Pa., the story follows Lilah and James through good luck and bad. Like me, Lilah believes in making her own good luck.

Please leave a comment for a chance to win a copy of Seventh Heaven. I'll announce a winner tomorrow night.

Breaking a mirror, everyone knows, brings seven years of bad luck, a belief dating back to the Romans.

Seven years of bad luck will plague anyone who kills a black cat on Halloween.

Superstition holds that if you sing before seven, you will cry before eleven.

To some, seven represents the day on which success will greet any special venture.

Believing seven to be the perfect number, the ancient Greeks considered seven lucky.

Goths worshiped seven deities, and the Japanese have seven gods.

In olden times, many lovesick would practice certain tricks on Halloween to aid them in divining who their true love would be, or end their search for love:

The first guest at a Halloween party to find a burr on a chestnut-hunt would be the first to marry.

The first successful apple-bobber would be the first down the aisle.

Single girls who scatter hempseed in a field on Halloween night will dream of their future husband.

Women could also bring a lantern to a fresh spring at midnight and see their true love's face in the reflection.

I can't help you see into the future, but I can give you a glimpse into the real Lambertville/New Hope area with the Seventh Heaven trailer:

Wow, there's more to the number 7 than what I thought. My daughter loves the one "To some, seven represents the day on which success will greet any special venture." She was born on Nov. 7. She claims to be very lucky since my original due date was Oct. 31 but she held on til Nov. 7 ;) Anyway, love the post! Have a great evening. T.

Interesting about the numbers. Loved the book video by the way. And I love old romantic movies. I'll have to check out Seventh Heaven.

your post really made me think. I know 7 is also mentioned in the BIBLE many times. I have been lucky with the number 7 but never related it to anything special. i do now!! The video was awesome too. I will look at 7 in a different light now. I hope to be entered in your contest. I would love to in your book.susan L

Thanks for your comments, everyone. Congrats to Karen, whose name I drew. I will email you the PDF.
Happy Halloween!