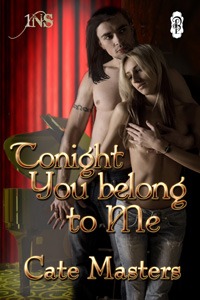 
Danny O’Malley’s screwed. The love of his life, Jillian Jones, tossed him out, thinking he’d cheated. They’d moved to Las Vegas together, hoping to find their big break at the Castillo Resort. Now he’s in deep with a loan shark to pay for the 1NS date with Jilly, his last chance to win her heart again.


Jillian Jones wants to see Sin City – in her rearview mirror. Agreeing to a blind 1NS date as a favor to a friend on her last night in Las Vegas, she melts when Danny plays their song: Tonight You Belong to Me. Thinking one night reliving the past won’t hurt, she ends up in bed with Danny. But when two thugs break in demanding money, Jilly finds she might go out with a bang in an unexpected way. Can she save him, and their relationship?


Reviews
Tonight You Belong to Me is a sweet tale of two people who make a mistake and have to make things right. Unfortuntately things aren’t easy for them. I love the Southernisms that Jillian puts into her dialogue. She has so many witty comments, I found myself laughing. The sex scenes between the characters will leave you breathless and wanting more. But best of all, it has everything that you enjoy about a One Night Stand story, wonderful characters, a compelling storyline, and passionate sex! Take time to read Tonight You Belong to Me today!
Sizzling Hot Book Reviews - 4 hearts

Who would Cate cast as these characters? Find out here.


“Pardon?” The bartender set her drink on a napkin and shoved it toward her.


She held up a twenty. “I’m pathetic. A failure.” For still letting him get to her. She raised her glass in a cheer. “He’s playing Tonight You Belong to Me.”


“Is he?” The bartender slapped her change atop the glossy black counter.


Scooping it up, she doled out two ones for his tip. “It was our song.” The bastard must have spotted her. Performing the song must be his way of having the last word. Well, no way. Downing her liquid courage, she set the glass on the bar, tottered on shaky legs to the piano and plunked a penny in the tip jar.


When he looked up at her, slow and easy, she wanted to melt.


Ebony bangs fell across his forehead, making his eyes look bluer than the skies over the desert. Full of longing, sorrow and smoldering heat all at once. “Penny for your thoughts?” he asked.


Her throat tightened, choking back a teary sigh. Same as the night they first met, down to the song and the bad line. But not his outfit. She glared at his wide shoulders, draped in a charcoal jacket, set off by a red carnation.


Her cheeks burned hotter than blue blazes. “You set this up?” Oh, she’d unleash hell on Karenna tomorrow, and tell her a thing or two. So much for friendship. But what did she expect in this town?


He stilled, as if debating another lie. “Yes.”


“I’m out of here.” Her mama didn’t raise a fool. At least, not one who’d let herself be fooled twice.


In two shakes of a lamb’s tail, he stood a hair’s breadth away, a rush of warmth sending his heat slamming into her, the air filled with his musky cologne and his need. Their bodies knew how to communicate too well, moving in tandem like some primal dance that always ended up with their clothes tangled up on the floor and their naked limbs tangled on the carpet. Or the table. Or the car. No easy feat in their cheap compact car, either. Somehow it only made their lovemaking sweeter, that was the hell of it.


His fingers circled her wrist. “Please, Jilly. One night. That’s all I’m asking.”


Her heart lurched. “Guess that’s all you’re good for these days.” At least he’d turned honest. Too bad, too late.

cky15: Sure like to do some hopin' find new books that I have not read. I also like to find new authors. I sure am looking forward to reading this one. Thanks