Isn't it fantastic? Dawne Dominique did a great job on this cover. Eternal Press will release Fever Dreams in mid-2010. 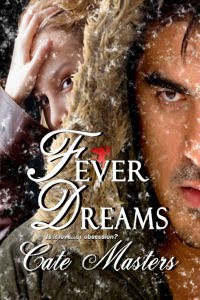 Here is the unofficial, unedited blurb:
When Diana Taylor changes jobs, she doesn’t expect it to change her life. Meeting Cal opens up a new world of passion. He encourages her to pursue her passion for photography. Her love overwhelms her, blurs the line between reality and dreams. But is it love or obsession?

And unofficial excerpt:
He glanced around. “Last weekend, I called your apartment about twenty times.” His short laugh revealed his embarrassment.
“I moved,” she stammered. So that’s what he tried to tell her that morning when Jack interrupted.
He jerked his head to one side. “I know… now.”
“I didn’t realize.” What an idiot she’d been. “I disconnected my answering machine.” Trying to avoid Adam’s calls.
The ring of her cell phone interrupted. Adam’s name showed in the display. So much for her avoidance techniques. She sent the call to voice mail.
By his forcibly dissolved grin, he must have deduced the caller had been Adam.
She had to cut to the quick. She knit her brow. "Look, I don't play games."
"Me either," he quickly agreed, the image of sincerity.
If only he didn’t look so good – his hair uncombed, the layers tousled. His steely blue eyes piercing hers. ”Why are you here? You said you don't want to get involved with a coworker."
He slid toward her. "I said I was hesitant to get involved."
"No, no, no." She stood and paced in front of the table. "I distinctly remember your exact words. You said you did not want to be involved. And, it's probably the best solution." She stopped and folded her arms.
"Maybe I was wrong." He spoke slowly. Deliberately. "Maybe I didn't know how much I wanted you."

You had me hooked at the blurb, Cate. *smirks* And by the way, the cover looks FANTASTIC!

A double thanks to you, Dawne! For your kind words, and for creating such fantastic cover art!