Cate, thanks for allowing me to promo my latest release, His Hope, Her Salvation, available today from The Wild Rose Press! 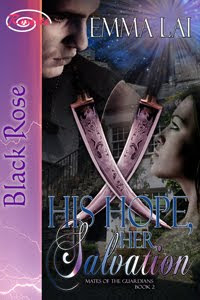 Promised in marriage to an abusive oaf, Judith resolves to find out if there can be passion without love. Snatches of conversation overheard at the local inn lead her to a mysterious American merchant who might be able to satisfy her carnal curiosity and capture her heart.

Donovan, a Guardian Hunter, is on the trail of a rogue Elysian in Georgian England. As the son of the First Hunter, he long ago gave up hope of finding his heart's mate. When Judith appears in his study, his inner beast and his heart demand he answer her plea for help.

Will their passion answer their hearts' pleas, or will it wither under the threat of reality?

“Where did the idea for the story come from?” I had this scene in my head of a desperate woman bursting into a gentleman’s study.

When I started writing the story, the hero, Donovan presented himself as bored and callous. The opening line exemplifies this.

“That will be all, Eallair.” I waved a hand in dismissal, my gaze focused on the fall of the elegant lace cuff against the blue velvet sleeve of my frock coat. “See this gaggle of geese out, if you’d please.” I glanced back at the occupants of the parlor, the corner of my mouth lifting in a sneer.

In the original version of the story, I emphasized his callous nature. From the opening lines until the study scene, Donovan was an ass. He treated his guests, his mistress and the heroine with disdain. Of course, the original version was written with Ellora’s Cave in mind. When The Wild Rose Press contracted the first story in my Mates of the Guardians series, they obtained the right of first rejection. So, even though Ellora’s Cave was interested in the story, I decided to keep the stories together at one publisher. However, in order to do so, I had to rewrite the crucial study scene and make Donovan more likeable.

“What do I do when my editor asks me to rewrite what I feel is a crucial scene?” Well, I put a lot of thought into the reasoning behind the request. In this case, I had to realize that even though I liked the scene, it did not portray Donovan as a very sympathetic character. Since the story is told in his voice and my readership is female, I figured it’s better to explore the reason behind his boredom and callousness at the beginning of the story rather than wait to show the reader how his behavior changes when he finds his mate. Otherwise, I’d be in danger of putting my reader off, and I want to involve her in the story rather than distance her from it. (This all sounds like calm, cool reasoning now, but it actually took me a few days to work it all out and resolve myself to killing my vision of the scene and then figure out how to rewrite it.)

“What’s next for me?” Well, I have a new baby boy who takes up most of my time. But, I have contracted my Regency erotica, Twice is Not Enough, with The Wild Rose Press and am working with my editor on edits. I’ve started a suspense story. I’ve started polishing a contemporary romance. And, as far as the Guardians go, I’m in a holding pattern as a major plot point evolves. In other words, I’m all over the place.

Question for readers: I’m curious to know what my readers would like to see.

Here's an excerpt from His Hope, Her Salvation:
The voices in the taproom of the Horse and Hound deafened us as we entered. A large group of men stood packed together in the center of the room. A roar ripped through the crowd as it surged inward.

I shoved my way through the mass of sweaty bodies with Eallair following in my wake. I stopped when confronted with the scene that held the crowd enthralled.

A large, older, well-dressed gentleman gripped my mysterious guest from earlier by an elbow. He shook her and yelled, “You little whore!” He raised a hand and slapped her across the face with his open palm.

The crowd cheered as she collapsed to her knees, her shoulder wrenched as the hand on her elbow restrained her from crumbling into a heap on the floor.

The dead look in her eyes and the lack of any outward emotion testified to the regularity of similar scenes she must have suffered. With a bellow of rage, I swooped forward and scooped her to her feet just as the old man raised his hand to strike her again. Placing my body between them, I snarled, “Release her.”

Email ThisBlogThis!Share to TwitterShare to FacebookShare to Pinterest
Labels: Emma Lai, His Hope Her Salvation, The Wild Rose Press

Thanks for celebrating with me, Cate!

Thanks, Marie! I hope it's fun. It's darker and spicier than HIS SHIP, HER FANTASY, but I had fun writing it.

Congrats on this latest release, Emma! What a year you've had. Whew!!

Thanks, Sarah Ann! It has been a whirlwind.

Congratulations on the release Emma. Loved the excerpt.
Cheers
Margaret

Looks like another great read! Congrats on the new release.

Huge prize: a cache of Time Guardian treasure. To enter, join me at:
http://groups.yahoo.com/group/skhyemoncrief/

Ugh. That's me, Anonymous. I hit the wrong key. LOL

No worries, Skhye. I would know you anywhere! :) Can't wait to see you Saturday!

Yeah Emma, congratulations on your new release. Good luck on another wonderful story.
Sell a ton of books Emma!

CONGRATULATIONS Emma!!!!Two books and one baby that's quite an achievement for 2009.

Thanks for stopping by, Mary and Mona!

Happy day-after-release day, Emma...sorry I missed the big day. You must be thrilled...and I am in absolute awe of you continuing to write with a new little one, btw, that's a feat to which I never even tried to aspire! :)

Thanks, Linda! It's definitely a juggle!