In the Author Spotlight: Kelly A. Harmon

Cate: Please welcome Kelly A. Harmon. Kelly, will you please share a short bio with us?
Kelly: Hi Cate! Thank you for having me.
I’ve always been a scribbler: jotting down notes and scenes and dialogue on whatever’s available: napkins, receipts, blank checks. Once I ruined my favorite lipstick on a cloth napkin at a restaurant.
I’ve taken detours along the way (I used to be a reporter) and I work full-time now to support my writing habit.

Cate: Sounds familiar! Tell us about Blood Soup and where it's available. 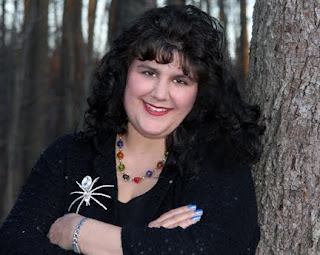 Kelly: Blood Soup is a story about murder, betrayal and comeuppance.
The story opens with a heavily pregnant Queen Piacenza. Her husband, King Theodicar naturally hopes for a male heir. The Queen is from Omera, where the first born rules, no matter the sex of the child. This causes no end of friction between them.
The Queen’s nursemaid, Salvagia, casts runes about the birth. Over and over, they yield the same message: “A girl child must rule or the kingdom will fall to ruin.” The women are convinced the baby will be a girl.
When the queen finally gives birth, the nurse and the king are equally surprised, and Theodicar is faced with a terrible choice. His decision will determine the fate of his kingdom. Will he choose wisely, or will he doom Borgund to ruin?
Blood Soup is now available on Kindle or PDF from the publisher, Eternal Press. It can also be purchased as a paperback from Amazon.

Cate: Very cool! Please tantalize us with a story blurb or excerpt.
Kelly: This is one of my favorite scenes: 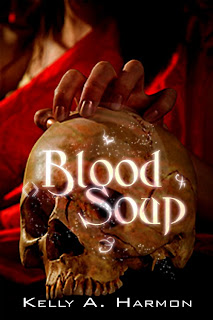 King Theodicar looked down at the mewling infant in his arms, and felt the anger rise up. Even in death his wife defied him, the nurse ensuring her success. Women did not rule. He would not allow it. They had created a male child, and that child would take the throne upon his death.
“You can save the boy,” he said to Salvagia.
She slitted her eyes at him, her stare mutinous. Her words were loud and hard in the wake of queen’s death. “I have the power to save one at the expense of the other, Sire. The girl is stronger. And eldest. She was born to rule.”
Theodicar watched the girl curl up in his arms, her birth fluids staining a brown patch on the dyed-yellow wool of his tunic. She burrowed into the crook of his elbow, trying to achieve the comfort of the womb.
“I will not hear those words again,” he said. “That absurd idea died with my wife. My son will rule.” He reached for the boy, thrusting the girl child back into the nurse’s hands. “There’s no need for a daughter. And no need for anyone to know of her.”
“So be it,” Salvagia said, wrapping the weary girl in a square of wool, covering her face. She reached for her basket.
“Kill her now,” said Theodicar.
Salvagia looked stricken.
“Sire, if we kill her now, she will be of no use to her brother. Once dead, the blood won’t flow, and we need her blood to strengthen his.
“Then drain her now,” he snapped. “I will not have her crying out when we call the witnesses back to cut the boy’s cord.”

Cate: Oo, chilling. What inspired you to write about the theme?
Kelly: I was in the middle of writing a sword-and-sorcery fantasy when a friend asked me to participate in the 3-Day Novel contest. It sounded like a lot of fun – for some reason, drinking lots of coffee and attempting to stay up and write for three solid days sounded appealing at the time!
Since I was already working on a fantasy, I plotted out a suspense tale. I didn’t want to be writing along and feel like I should incorporate it into the novel afterward. I also wanted to have a tight enough plot to be able to finish the story within the time limit.
The idea of blood becoming an integral part of the story didn’t develop until after I’d started writing. As I worked through the plotting process, I considered how blood is a requirement for life, and that with any great loss of it, we perish. So, I began to think of ways blood could be used for healing or as a medicinal ingredient. (My story has a medieval setting, so it didn’t matter if my assumptions about blood were false or not – it only mattered that the characters believed them.) Taking it a step further, I wondered at the efficacy of using blood to save the life of another person: Could blood from a well person pull a dying person back from the brink? Could it strengthen a weak constitution? I considered whether or not a person could subsist on a diet of mostly blood...human or animal. And, what happens to someone who develops such a taste, so much so, that it’s like an addition?

Cate: How do you develop your plots and characters?
Kelly: I like to know where my story is headed before I write it. I find if I know a little bit about the middle and the end, I’m never beset by writer’s block.
Characters on the other hand, I allow to grow with the story. I only know the briefest of details about them before I start. Learning about my characters as I write is an exciting experience: it makes the story come alive for me.

Cate: Do you feel as if the characters live with you as you write? Do they haunt your dreams?
Kelly: My characters don’t haunt my dreams…but they are frequently with me during the day. I hear them speak the dialogue in my mind. Sometimes they’ll say something surprising and add some flair to the plot I hadn’t considered yet.

Cate: What's next for you?
Kelly: In May, I have a short story coming out in the Bad Ass Fairies 3 Anthology: In All Their Glory. As the name implies, these fairies are not Tinkerbelle.
My story, Selk-Skin Deep is an alternate history which takes place during the Vietnam War. Cade is a Navy SEAL, and a selkie – a Scottish fairy who is a seal but can shed his skin and become human. He’s stationed aboard an aircraft carrier which… well, you’ll have to read the story to find out!
I also have a non-fiction chapter in the book, How to Write Paranormal, coming out later this year. It’s all about forming critique groups and how to give a good critique. 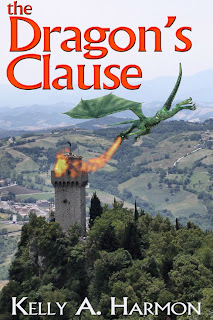 Cate: Any other published works?
Kelly: My short story “The Dragon’s Clause” is available as a Kindle Short or in HTML at iFiction.
This was originally published in the anthology Black Dragon, White Dragon. My story “On the Path” is published in the Triangulation: Dark Glass anthology. I may release it later this year on Kindle as well.

Cate: What’s the most challenging aspect of writing? Most rewarding?
Kelly: The most challenging aspect of writing for me is to turn off my internal editor. I’m getting better at putting words onto paper and ignoring them until the re-write, but sometimes it’s hard. I love words, and I want to make sure I’m using the right ones at the right time. I keep a well-thumbed thesaurus by my side all the time.
As for rewarding, I enjoy typing, “The End.” It always brings a smile to my face.

Cate: It is a good feeling. What’s the most interesting comment you have received about your books?
Kelly: I love this quote about Blood Soup from one of my 5-star Amazon reviews:
Kelly Harmon writes with a flowing style that draws you right in to her swirling mix. Read it at a bus stop and you'll miss three buses before you even look up. It's hot. It's tasty. Take one spoonful of "Blood Soup" and you'll finish the bowl!

Cate: Great review! Who are some of your favorite authors and books? What are you reading now?
Kelly: I read EVERYTHING...I always have, although I’m partial to fantasy, science fiction and horror.
I remember reading Carole Nelson Douglas’ Six of Swords as a teen and loving it. I wanted to write stories like that. Terry Brooks was another teen favorite. I read The Sword of Shannara over and over.
Dean Koontz thrilled me with Whispers. My mom and I read it together one summer, each stealing it from the other as time permitted, racing to the end. My bookshelves are still heavily populated by Koontz. His Odd Todd series is great.
Heinlein, Asimov, Bradbury…the list goes on and on.
I’m currently reading the Time Traveler’s Wife by Audrey Niffengger.

Cate: I grew up on Ray Bradbury. Love Audrey Niffenegger too.
Where can readers find you on the web?
Kelly: My Web site is: http://kellyaharmon.com.
My amazon.com Web site is here.
I also have a facebook fan page
And, I’m on twitter: @kellyaharmon

Cate: Is there anything you’d like to ask our readers?
Kelly: Are we done with vampires yet?

Cate: Readers, Kelly is giving away a book to a random commenter... so start commenting. She'll pick a winner tomorrow night.

I'd like to read the bad ass fairy, kelly. It's refreshing to not have the annoying tinkerbell fluttering around her goodness everywhere.

I think you can order it now from Mundania Press (http://www.mundania.com/book.php?title=Bad-Ass+Faeries+3:+In+All+Their+Glory). Too bad you're not in the US! I'll be reading from my story this weekend at Balitcon (www.balticon.org). It would be a blast to meet up!

A bad-ass fairy sounds fun! I love stories with a twist.
Have a blast at Balticon! Hope you'll share pics etc.

Hi Kelly,
I see your Blood Soup is a great seller. Congrats.
I'll be looking for the bad ass fairies. Sounds like another winner is on the way.

I like the idea of "The Dragon’s Clause". I love the medieval era and anything that would describe the weaponry of those times simply amazes me. I do hope that you include in your next works about medieval stories. medieval weapon