In the Author Spotlight: CJ Gabriel

Cate: Please welcome Caitlynn J. Gabriel. CJ, will you please share a short bio with us?
CJ: Hi, Cate. Thanks for having me today! About me…well, I’m a mom of two, a cashier at my local Albertsons, the wife to one helluva guy, and a cautiously optimistic writer. I love the outdoors, especially jogging even though I sometimes find myself lost in thought and walking halfway through a run!

Cate: Tell us about “To Stand with Angels” and where it's available.
CJ: “To Stand with Angels” is –Are you ready for this?- a paranormal/horror/western/romance. A real mash-up, I know. It is set in the late 1800s, the Wyoming Territory, and is about a woman who’s been in hiding, an ex-gunslinger who happens into her life, and a 600 year-old-demon who’s hot on the trail of the soul capable of destroying him forever. I’m hoping you will not look at the Old West the same after you read this novel.

Cate: I love mashups! Please tantalize us with a story blurb or excerpt.
CJ: Ooooh, goody…
For seven years, she's fought her demons. Now, a stranger has arrived and the real battle is about to begin... Set in the summer of 1878, "To Stand with Angels" will change your perception of the Old West in ways you've never imagined.

~One beautiful heroine? Check.
~One smoking hot bad-boy with a dark past and blue eyes that won't quit? Check.
~One evil cattle baron whose cool good looks do nothing to mask his brutal intentions? Check.
~One gorgeous saloon owner who is caught between a jealous lover and the man of her dreams? Double check.
~One six-hundred-year-old, bad-ass Demon with a huge grudge and one unlucky target in his sights? Got it.

Are you ready for a Western mainstreet showdown that is anything but a quick-draw gunfight? If you like paranormal/horror mixed with a western-romance twist, then take your stand and let the battle begin!

Excerpt:
Bradyn shook his head in disbelief and stared at the man before him. “Kyle Bodeen,” he murmured as his memory clicked at last.
“I’m surprised you remember me, Preston.” Kyle’s smile widened. There was no friendliness or warmth in his expression. It was the look of a man who was forced to make nice because he needed something from someone he could barely tolerate. 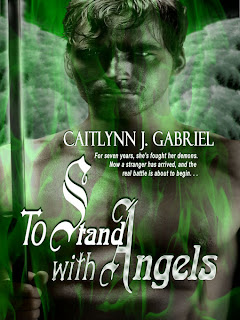 “I remember you,” Bradyn snarled. His chains rattled as his hands formed tight fists around them. “You’re the dumb son of a whore who tried to pin that missing ace of spades on me in Tulsa a few years ago. You got a man killed.”
Kyle’s throaty laughter set the ravens to flying around the stable in a flurry of black wings again. “You got a man killed, you mean. It wasn’t my bullet that sent the poor bastard to his grave, Preston.”
Bradyn winced, trying to push the memory of the foolish, young cowboy out of his head. The kid had challenged him to a gunfight after Bodeen had planted an ace on Bradyn during a game of poker. Bradyn had tried to convince the kid that he hadn’t taken the card. But the boy, who had been a little too drunk and much too eager to prove his prowess with a gun, had not backed down. When the kid had drawn his revolver, Bradyn had reacted out of pure instinct. The boy had died half-way in, half-way out of the saloon. His eyes had been wide with glassy, stricken panic and his legs splayed in an unattractive fashion as he’d drowned in his own blood. “The kid didn’t leave me much choice, Bodeen,” Bradyn said between clenched teeth. “If you hadn’t put that ace on me in the first place, he would still be alive.”
“I doubt it,” Kyle replied. “That boy was too impulsive and reckless. If it hadn’t been you, he would have picked a fight with some other gunslinger and still would have gotten his idiot head blown off. His kind lives to die for foolish reasons.”
Furious, Bradyn fought hard to restrain himself from the stampede of profanity that charged to the tip of his tongue. “What the hell do you want, Bodeen?” he asked. His jaw made a loud snapping sound as he ground his teeth together.
“Tsk, tsk.” With the cold, menacing smile still on his handsome face, Kyle chided him. “You will know your purpose soon enough.”

Cate: What inspired you to write about the theme?
CJ: *Laughs* Now there’s a story. I’m guessing we don’t have time for the long version so here goes. I am an avid Clint Eastwood spaghetti western fan, the “Man Without a Name” movies in particular. One day I was watching “The Good, the Bad, and the Ugly”, the scene where they’re digging in the cemetery, when it occurred to me, “Wouldn’t it be cool if a vampire or some other demon showed up right about now? Wouldn’t that just take everyone completely off-guard.” That’s when I started the outline for my novel.
About that time, we were also watching “Lost” and I just adored Josh Holloway’s character “James ‘Sawyer’ Ford”; he instantly became the vision for my character “Kyle Bodeen” (when you read the novel, you’ll see why).
One other movie played a role in the way I addressed my plot, “From Dusk ‘til Dawn”. The way that the beginning starts off; a situation of natural human peril brought on by your average, run-of-the-mill criminals (nothing too dramatic, but enticing to watch none-the-less), until suddenly they enter that saloon and the tables turn. BAM! Vampires everywhere and nobody saw it coming. That’s what I did with “To Stand with Angels”, with one exception. I don’t have vamps in my novel.

Cate: How do you develop your plots and characters?
CJ: Lots of thinking. I usually take a hot bath, climb into bed, and lay staring into space…imagining. Some of my best dialogue, scenes, and character/plot development happens during that space between asleep and awake.

Cate: Do you feel as if the characters live with you as you write? Do they haunt your dreams?
CJ: Absolutely. Part of the reality of a character in writing, must be the awareness that character creates in your mind as the author. You have to believe in them if you want anyone else to. I do think that, on some level, my characters really are a part of me and are an organic, living work of fiction.

Cate: What's next for you?
CJ: Here’ s the part where I’m supposed to say, “My next novel “At the Devil’s Right Hand,” which is what I am working on right now. However, I am also stumping for “To Stand with Angels” and building a blog that expresses art in it’s true form; namely the art of writing, but also by incorporating the books and artistic stylings of other authors, artists, and musicians. “At the Devil’s Right Hand” will hopefully be done this Fall (fingers crossed) and I can’t wait for everyone to read the next installment in my trilogy!

Cate: Any other published works?
CJ: Nope. Not yet. But soon!

Cate: What’s the most challenging aspect of writing? Most rewarding?
CJ: Keeping all of my characters straight in my head. I am a stickler for being accurate with times, dates, ages, and making sure they all jive. That can be tough when you have 5 characters to build in a novel!
The most rewarding part of writing is getting to hear someone tell me how much they enjoyed my story. Hearing, “I loved your book” is the best payment for all those months of hard work.

Cate: What’s the most interesting comment you have received about your books?
CJ: I was told that my novel could be compared to the TV show Carnivale (which I have never seen). Apparently there are a lot of similar “good vs. evil” and angel/demon themes. Sweetness.

Cate: Who are some of your favorite authors and books? What are you reading now?
CJ: My all-time favorite book is “The Stand” by Stephen King. The themes and characters are so vivid and enjoyable to read…I read that novel at least once a year. Anything by King…as well as Edgar Allen Poe, John Grisham, Nora Roberts, J.K. Rowling, and Anne Rice.
Currently I’m reading a novel called “Fever Dreams.” I think you may know the author, Cate Masters? Quite an intriguing read thus far!

Cate: Aw, thanks. *blushes* I can't wait to read To Stand with Angels either! I am so intrigued by the premise.
Where can you be found on the web?
CJ: I frequent my blog most often: www.cjgabrielbooks.blogspot.com
Also my webpage: www.cjgabrielbooks.com and my favorite writing forum, www.writingforums.com

Email ThisBlogThis!Share to TwitterShare to FacebookShare to Pinterest
Labels: C.J. Gabriel, mash-up, To Stand with Angels

Great post, CJ! Your wonderful novel has been getting great reviews. The premise is fantastic! I'm sure it is going to have plenty of sales.

Wow, to have your novel compared to a TV show. Now thats what you call publicity lol
Enjoyed reading the blog.

Thanks guys! I love to see your smiling faces on my blog...and now to have the honor of seeing them at my own interview is just fantastic!

Cate~ Thanks so much for the opportunity. You are one of the greatest, sis!

Really nice interview CJ! I like your question too. I live in a haunted house, so that's not too big a challenge, but the local cemetery is so new and parklike...I think I'll stay with my ghosts. It's an old family house, so they're all related to me and I actually feel watched over and loved there.

Oh what a fun interview. Sounds like you did a terrific job of the mashup. A dark western with many twists and turns. Yum. My kind of thinking out of the box.
Hey, I'd rather spend a night among tombstones than a reputed haunted house.
I loved The Stand by King too. I couldn't put it down.
You have a winner on your hands CJ, thanks for sharing.

I finally started reading it last night, CJ, but had to stop when my eyes drooped (I seriously need an ereader!) So far it's great! Can't wait to read on. :)

Hi CJ! To Stand with Angels sounds terrific. I wouldn't have believed such a mash-up would work, but I have to admit I'm interested! Good luck with sales.

As for your question, I've done the haunted house thing, having grown up in a haunted monastery. I think I'd like to check out a graveyard...

"And the winner is...*Drum roll please*"

Congrats, Kelly! The novel should be in your inbox right now~