Lyrical Press has contracted my contemporary novel, Rock Bottom. It’s my first title with this publisher, and I’m very excited. They have such amazing covers, I can’t wait to see the cover for Rock Bottom. The tentative release date's June 2011, so it will be a little bit of a wait, unfortunately. Initially the release will be in ebook format, but it's a great story, so I'm hopeful it will do well enough to go to print.

New contracts are always exciting, but this one’s especially meaningful because the hero’s name is Jerry Trently. I worked with the real Jerry Trently when I first moved to central PA and landed my first job here. Jerry was a phenomenal person, personally and professionally. Both Beatlemaniacs, we shared a love of music. Every fall, the Twice a Year Band would play at Jerry’s farm in their own version of Rocktoberfest. Jerry would be front and center with his guitar and smiling face. 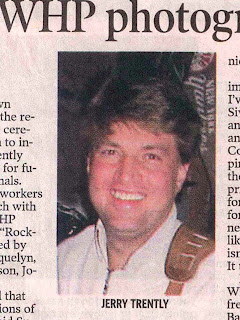 The videographer, and eventually news director, for a local CBS affiliate, Jerry won numerous awards for his “photographic ingenuity and artistry,” a tribute article said. Here’s an example of Jerry’s coverage of Civil War reenactors in Gettysburg. His expertise was recognized by the Mid-Atlantic Chapter of the National Television Academy with The Jerry Trently Prize, which not only recognized his amazing career, but also awards a $1000 prize to students through the Chapter’s National Student Television program.

As someone who aspired to and inspired excellence in others, it seemed incredible to me when Jerry was diagnosed with a brain tumor. Inoperable. He remained an amazing inspiration as he endured this difficult journey, maintaining his faith and sense of humor until the end. We all lost a wonderful person in 2006, and it still saddens me. Forty three years was not long enough for Jerry to do all he wanted to do, although his contributions will continue to enrich the world.

His positivity still inspires me. So much so, I had to dedicate this novel to him. He has more important tributes that will endure, but I loved the idea of having Jerry go home to the farm he so treasured. And that he could be a rock star. Jerry was a rock star in his own right.

Thanks to Jackie, who allowed me to use Jerry’s name, and to Rob Hershey too, who makes a cameo appearance at the end as Jerry's new manager. All of you at the station were like surrogate family to me when I moved here, and I love you all.

So, as my dedication will read: To Jerry, who showed us all how to aim for excellence. Rock that heavenly choir.

This is for you, Jer.

Jerry sounds like hero material. So sorry for your loss of him, but congrats on the book sale.

Jerry was a true hero, missed by many.
Eddie Vedder could be bald and still be amazing. :)