In the Author Spotlight: Paty Jager

Cate: Please welcome Paty Jager. Paty, will you please share a short bio with us?
Paty: I've been writing for years. Actually took it serious when my children were small writing stories for their classes. Then I tried my hand at a couple mysteries and ended up writing historical romance and joining RWA(Romance Writers of America). The fifth historical romance I wrote was published by The Wild Rose Press in 2006 and I've since published five western historical romances, one contemporary western romance, and have a historical paranormal and another contemporary romance coming out later this year.

Cate: Tell us about Doctor in Petticoats and where it's available.
Paty: Doctor in Petticoats is the fourth book in the Halsey brother series. Clay was blinded in an accident in the previous book and is sent to a blind school on the other side of the state to learn how to deal with his new situation. While there he learns his fate isn't as bad as he thought, and he finds a woman who shows him he is still a virile man who can take charge of situations.
Rachel is a woman in a man's world. She finds it hard be taken seriously as a doctor and with her father's influence is given the job of physician for the blind school. When Clay breaks his leg, she not only gets to prove her worth as a doctor she also learns there just might be a man out there strong enough to not be put off by her education and her scars.
It's available at: http://www.thewildrosepress.com/doctor-in-petticoats-paperback-p-4105.html

Cate: Please tantalize us with a story blurb or excerpt.
Paty:
“I’m going to look in your other eye now.”
Rachel again placed a hand on his face and opened the eyelid, stilling her fluttering heart as she pressed close. His clean-shaven face had a couple small nicks on the edges of his angular cheeks. The spice of his shave soap lingered on his skin. 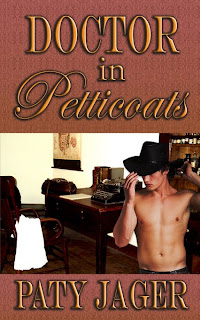 She resisted the urge to rub her cheek against his. The heat of his face under her palm and his breath moving wisps of wayward hair fluttered her eyes closed. She pretended for a few seconds he could be her husband. A man who loved her and wouldn’t be threatened by her occupation or sickened by her hideous scar.
His breathing quickened, and his hand settled on her waist, slid around to her back, and drew her forward. Her hand, holding the lens, dropped to his shoulder, and she opened her eyes. This behavior on both their parts was unconscionable, but her constricted throat wouldn’t allow her to utter the rebuke.
Clay sensed the moment the doctor slid from professional to aroused woman. The hand on his cheek caressed rather than held, her breathing quickened, and her scent invaded his senses like a warm summer rain.

Cate: Can you tell us why we're going to love your hero?
Paty: Clay starts off the book feeling sorry for himself and being self-centered. He has a lot of growing to do and it takes a boy who has shouldered the burdens of his mother and sister to help him grow. And the faith of a strong woman to help him see his potential. But even with these flaws, Clay has a heart of gold and genuinely cares for others.

Cate: Tease us with one little thing about your fictional world that makes it different from others.
Paty: I don't think they had such a thing as the "mile high club" back in the days of train travel, but my hero and heroine, have their own version going on in the Pullman car's washroom.

Cate: What's next for you?
Paty: I have a historical paranormal set among the Nez Perce releasing in August, and a contemporary western releasing, hopefully, later in the year.

Cate: What inspired you to draft your first story?
Paty: The desire to put a story that was in my head on paper.

Cate: Do you have a writing routine?
Paty: I've recently begun a routine of not opening the internet until I've written at least 2000 words or finished a project- i.e. edits or galley proofs. That is helping my productivity immensely! But I write in the mornings, do freelance editing in the afternoons, and spend one day a week on promotion.

Cate: Is there anything you’d like to ask our readers?
Paty: What keeps you reading series books? How many books in a series is too much?

This post is part of a blog tour. Go to my blog at http://www.patyjager.blogspot.com You'll see the list of places I've been. Visit them and leave a comment. The person who comments on the most blogs will receive an autographed book, a gift card to B&N, and other goodies.

Cate: You heard Paty! Click and comment for a chance to win these goodies! Thanks for being my guest, Paty, and best of luck with Doctor in Petticoats.

Welcome Paty! Congrats on the release of Doctor in Petticoats. Loved the excerpt.

Thanks, Cate! I'm excited to be here!

You're my writing guru--not opening the internet until 2K words are in the can. I gotta start following this advice. Sheesh.

Hi, Paty and Cate! Great interview! As for series books, I fall in love with the characters and the setting and don't want to leave them behind--I love how with a series, I get a chance to catch up a bit with the whole "community" of characters. It's getting to experience the world the author has created a slice at a time with each new book.

As for how many is too much, I think it depends on the author/series--with a good one where the author has fresh ideas and more stories to tell, I'm happy to read on and on! If the series reaches a point where it seems as if the author herself has tired of the scene or some of the plots/characters are rehashed, then that's past the point of retirement :)

As for series, I follow the ones that strike me. Good story, characters, etc.

As for how many is too many....I guess it depends. I read Sherlyn Kenyon, lots of books in her Dark hunter series. But I have read other authors where their books are not in a series but they all start to sound the same. I guess if the stories start to fizzle, ideas start to fade for the characters, it's really hard to say.

If there was a series about a 1k population town, and someone wanted to do a book about every person living there, as long as the stories kept my interest I would buy and read :)

That being said, I have started several series and come across one in the series I didn't care for, but it didn't stop me from still reading the new ones that came out

Paty, You are so tempting me to part with my money. I love this excerpt.

Would you recommend a reader to start with the first book in the series or are each a stand alone title?

Sorry, I'm late responding. We're getting ready for a family reunion this weekend, but keep showing up at the blogs and I'll be here off and on to answer questions.

Autumn, You could read the books as stand alones. You'd just have couples in books that you would later find out how they got together. There is an element in Outlaw that is brought up in Marshal, but you don't have to have read Marshal to know what's going on.

I like series but after awhile some started to be alike.

You ask about why I enjoy series. It's because the characters become friends. I want to know what's happening with them. When I really like the characters I don't want the series to end unless all the loose ends are tied up and there is no place else to go with the series. Sometimes when a series is about a family, there are only so many stories to mine from a family then it's time to end when every member gets their story. Your Halsey Brothers series sounds good. More for the TBR pile.

She, I agree, a family helps make a series work.

I remember seeing Doctor in Petticoats in the Garden. Sounds like a great book.

Hi Paty,
Great cover and excerpt. I just love westerns, and I know I won't be disappointed when I read Doctor in Petticoats.

Alice, Yes, Doctor in Petticoats was an early release and is now a full release.

Congrats on your wonderful new review from Love Western Romances, Paty! For anyone who missed it, it's here: http://www.lovewesternromances.com/2010Reviews/docinpetticoats_review.html

Thanks Cate! I hadn't seen it yet.

Hi Paty,
I love when a series shows character development and the backstory over time. Also like when author brings in history. Three women writers(of mysteries) come to mind: JA Jance, Janet Evanovich and Betty Webb. Jane Kirkpatrick does it well as do other WWW writers.
Arletta

Thanks for your thoughts, Arletta.

Sound advice that sticking to the writing rules you've made for yourself. It's so easy to get involved in e-mail, Facebook, blogs, etc. and not get any writing done. What's this about a Pullman encounter? :-)

Eunice, if you read the blog at Marie Tuhart's you'll know what the Pullman encounter is.

Even though you've previously mentioned on your Blog Tour, Paty, that you write 2K words before you open e-mail, etal, the lightbulb came on in this one!! This is wonderful discipline, IMO, and I know I can make this a ritual for myself. Thanks for the repetition.

And as always, your excerpt is soooo good! I love Clay and Rachel and haven't even read their story yet!