Woot! My fantasy novel, Surfacing, is now available in ebook format from Whiskey Creek Press. A print edition will soon be available from Amazon.

I finished this trailer over the weekend. It's one of the shortest I've created, but I think it does the job well. What do you think?

Here's an excerpt:
“Look out!” a woman screamed as the gator closed in.
Something slammed into his stomach and whooshed him beneath the water. A second slam, more like a thud, and he thought it was all over. For both of them. The thing gripped him without hurting him somehow, but moved so fast, AJ thought his body might break from the pressure of the speed. It felt like hurtling through the canal on an underwater express train, rolling as they went.
As his lungs felt near to bursting, they slowed and surfaced. Whatever held him released him by propelling him face-down onto a grassy bank. 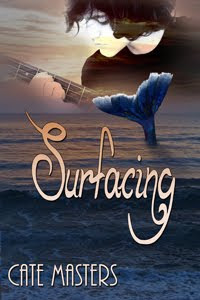 Gasping for air, he scrambled up the side to escape it, but his arms and legs flailed, more spectacle than anything.
“What were you doing?” a girl’s rich, full voice asked.
He glanced over his shoulder, still grasping at the bank for leverage. He fell to the grass, stunned.
Instead of the ugly head of an alligator leering at him in a crocodile smile, the girl, even more gorgeous up close, leaned her hands on the bank and lifted herself up. Her wet hair clung to her chest and waist.
Too many questions flew through his head at once. “What?” he managed.
“You could have been killed. Why did you do that?” Her green eyes sparkled like emeralds flecked with onyx. Her long dark hair framed her porcelain face and rosebud lips.
His chest heaved. “You’re kidding, right? I saved you.”
She burst into laughter. Like bells tinkling, like music.
Fascination turned to irritation. He risked his life for her. “What? That alligator would’ve killed you.”
This made her laugh all the harder, her laughter like a melody he couldn’t quite place, though familiar.
The alligator drifted toward them on its side, like a log. Unmoving. Unconscious.
She giggled. “It won’t hurt you now.”
AJ glanced downriver to where the boat should have been. “What happened? Where’s the boat?” He held a hand to his head. He wished she’d stop laughing. The sound got inside his brain, jumbled his already knotted thoughts. And every time she looked at him, her eyes hypnotized him—their whites so clear and bright, the green shone like gemstones. Like no other eyes he’d ever seen.
Glancing upstream, she smiled. “Right where you left it.”
“No. I left it right there.” He still couldn’t catch his breath. Or his mind.
She twisted up and sat on the bank. “No, you left it around the bend. Remember?” As she turned her head, her hair shifted, revealing the curve of a breast.
AJ blinked, thinking his eyesight might have been affected by the impact. But he could see as clear as ever. The old biddy was right. “You’re not wearing clamshells.”
Her glittering eyes snapped to his. “What?”
His mind raced. If this girl was what he thought she was, he wanted to get closer. He slumped on the bank, letting his feet slide closer to her. “What are you doing out here? You’re not with the show.”
She tossed her head, and her hair swirled across her like a glossy curtain, tantalizing him. She edged toward the water. “No.”
The end of her tail rose, then swished beneath the canal. For a moment, he’d caught sight of it, the colors exactly as Grandpa had described: iridescent, ever-changing, like rich silk. He shifted closer for a better view. The transformation from skin to tail was seamless. Undetectable.
It was no costume.

A Mermaid--Loved the excerpt. This sounds wonderful.

I tried to view your video, but it wouldn't play for me--darn.

Good luck with your new release.

Thanks so much Karen! I'm very excited. :)
Sorry the trailer didn't play. YouTube can be a bugger sometimes.

Don't I know about YouTube--drives me crazy sometimes.

Anyway, I came back to try the book video again. I had to see it. lol

It worked this time! It was perfect. Gave me the perfect tease for the story. Good job!

Neat. I love the excerpt. Cool video (I decided to watch it 'cause you said it was short - I like the ending.)

Thanks so much! I'm very excited, if you can't hear the squees from here, ha ha.

Congrats on the new release,

Thanks so much Tara!