It's garnered some wonderful reviews too. Dark Diva Reviews gave it 5 Divas, saying "Wilderness Girl is an adorable contemporary romance with a really cute beginning that will make you laugh out loud! There are multiple funny moments as Hank teaches Dana how to be a wilderness girl. This storyline was a nice change of pace... and it was quite enjoyable."

You Gotta Read Reviews rated it You Gotta Read, saying, "I loved this story for one main reason-it's why I love romances. The story was so fun."

It was definitely fun to write! 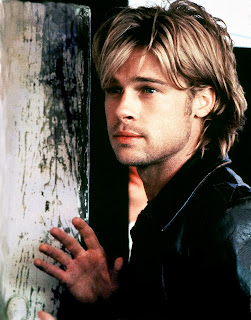 Hank, the hero, is tall, blonde and artistic, with an easy smile. He also rides a Harley. There's just something about a guy on a motorcycle that gets me every time. Brad has that same laid-back vibe. Equally at home building a fire on a hilltop or running power tools in his workshop, Hank's the kind of guy who intrigues me because he's always up to something new. He thinks before he speaks rather than blurting out the first thing that comes to mind. Though he might take a little time to trust his instincts, he's a guy who knows what he likes when he sees it. 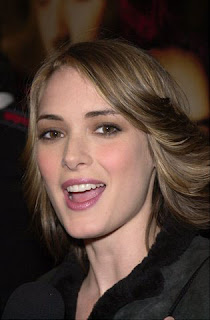 So when he meets Dana in the Wilderness Outfitters store, sparks fly. A web developer, Dana's outdoor experience to date consisted of walks to and from her car. She's not thrilled about camping, but can't resist the offer to try it. Initially, she'd hoped it would bring her closer to her boyfriend, but after he dumps her, she resolves to go it alone. And hopefully run into Hank in the wilderness. Winona Ryder starred alongside Brad in my head. She loves to take on the roles of quirky, interesting characters, so it seemed a good fit.

You can view the entire Casting Call series (so far) by entering the key words Casting Call in the search box to the right. Watch for Story Elements about Wilderness Girl tomorrow.

Here's a little different excerpt than the usual:
Exhaling a long breath, he shook his head. “Dana. You’re dangerous.” He bit his lip and looked at her. Gently, he tugged her T-shirt into place.
She ran a hand over his arm to his cheek. “Not really. Only if you want me to be.”
His face went blank. “We should get back.”
“Why? What’s wrong?” Scrambling to her feet, pebbles shot off the edge and tumbled below.
“Nothing. It’ll be dark soon.” When she was safely away from the edge, he walked back the way they’d come. He moved at a brisker pace, pushing branches aside, waiting for her to pass.
What had she done? Had she said something wrong? He was practically running away from her.
Nearing the trail, she scraped past a bush. “Ow.” She hissed through her teeth, looking at her thigh. A thin red line of blood appeared along a scratch.
His lips formed a thin line. “That’s why you shouldn’t have worn those damn shorts.”
“What is your problem with my shorts?” She held the edge above the scrape so the blood stain wouldn’t seep in.
He pointed up and down. “Because your legs are….”
“My legs are what?” You like my legs, she wanted to taunt. She stifled a grin. So she was having an effect on him. Maybe as powerful as the one he was having on her.
A groan burst from him and he walked ahead. “Let’s just go, all right?”
Wordlessly, she followed him to the stream. He bent without looking at her.
She climbed on his back. “Careful–the blood will get on your arm.”
He hoisted her up. “You probably didn’t even bring a Band-Aid, did you?”
She held his shoulders, less tightly than last time. “No. I hadn’t planned on traipsing through the woods.” Yikes, she sounded like a scolding mother.
He stepped into the water too quickly and slipped on a rock.
He was rushing to get back–why? “Whoa. Slow down.” She clutched tighter.
“What?” He still sounded upset, and still plunged ahead too quickly.
“I don’t want to drown.”
He mumbled something under his breath.
“You know, I’m not out to hurt you.”
“What are you talking about?” He walked faster. Too fast. His shoes slid across the rocks.
“All of a sudden, you act as if I’m poison to you. I’m just trying to understand why. I’m every bit as vulnerable as you.” She clung closer as he jostled her with his fast stride.
“That’s what I said.” His leg went crooked beneath him and he lost his balance. He gripped her thigh tightly struggling to correct it, but released his hold when they fell to one side and toppled into the stream.
Her head went underwater. The stones in the stream bed grazed her knee. At least she wouldn’t drown—it wasn’t deep here. She pushed herself up to a wobbly stand, the current surging around her legs.
Throwing back his wet head, he rose from the water and lurched toward her. “Are you all right?”
“Fine.” Her arms flailing for balance against the stream, she forced her legs ahead.
“Here, I can carry you.” He reached for her hand.
“No.” She moved away from his grasp and her sandal slipped on a slimy rock. Was he playing with her? He had to know how sexy he was, how women reacted–too easily–to his animal magnetism.
The water whooshed when he slogged past her. “Just get on.”
“I told you I can take care of myself.” Pushing her legs toward the bank, she slipped as the water grew shallow and the rocks greener.
“Careful.” His hand steadied her waist.
She sprinted up the bank. “No worries.” Her sarcastic tone couldn’t be helped. Mr. Take It Slow had no real worries. With his looks, he could have any girl he set his sights on.
He stopped, nearing her tent, one foot planted ahead on the hill.
She whirled to face him, her wet hair slapping her cheek. “You can go on. I said I’ll be fine. I’m going to get my book, dry off in the sun, make a little dinner…. Maybe I’ll even change my damn shorts.” Under her breath, she muttered, “Would that make you happy?”
His gaze ran from her soggy sneakers up her stream-soaked legs to her clingy wet T-shirt. “You should clean out that cut. You don’t want it getting infected.”
She said nothing. Whoever said better when wet should have seen Hank in wet clothes, chest still heaving, hair dripping down his cheek. She wanted to lick him dry. She folded her arms so he wouldn’t see her hardening nipples.
He stepped closer. “I have a first aid kit. I’ll go get it.”
“Don’t trouble yourself.”
“It’s no trouble. I’ll be right back.” Without waiting for a response, he jogged off and disappeared into the trees.
“I’ve heard that before. Adios, compadre.” If he was anything like the other guys she knew, he wouldn’t return. Something knotted inside her. He wasn’t, though–he seemed nothing like anyone she’d ever known. Still, if she intended to stay the night out here, she’d have to fend for herself. To do that, she’d need to get the fire going again.
Turning, she pushed her hair away from her face. She should probably comb this mop before it dried. No–sticks first. She bent to pick up scattered twigs and dumped them into the circle of rocks.
She set her hands on her hips. “Okay. Now what?”
“Here, I’ll help you get it started.”
Startled, she gasped and glanced in the direction of his voice. He’d come back.
He extended his hand, a tube of ointment in his palm. And a Band-Aid.
Yes, he was good at starting fires. Too good.