Stacey Kennedy in the Romancing Your Dark Side Author Spotlight 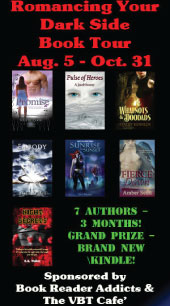 Cate: Please welcome the next Romancing your Dark Side author, Stacey Kennedy. Stacey, will you please share a short bio with us?
Stacey: Stacey Kennedy’s novels are lighthearted fantasy with heart squeezing, thigh-clenching romance, and even give a good chuckle every now and again. But within the stories you’ll find fast paced action, life threatening moments and a big bad villain that needs to be destroyed. Her urban fantasy/paranormal and erotic romance series have hit Amazon Kindle and All Romance Ebooks Bestseller lists. If she isn’t plugging away at her next novel, tending to her two little ones, she’s got her nose deep in a good book. She lives in Ontario, Canada with her husband. Be sure to drop her a line at www.staceykennedy.com, she loves to hear from her readers.

Cate: Tell us about Whatnots & Doodads and where it's available.
Stacey: A witch with unruly magic, a demon gone good, lava-hot passion and a tornado of emotions–just another night in Strange Hollow. 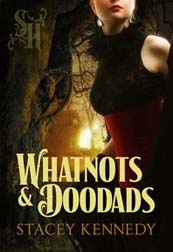 For Bryanna, a witch from the Asheville Coven, magic is on the fritz. Shunned by her coven and her boyfriend Layton for her unruly magic, she seeks a new life for herself. It just so happens, fate steps in and brings her to Strange Hollow–a place where being different is not only acceptable, but encouraged.


When Bryanna arrives in Strange Hollow, Zeke, a demon gone good, is burning with Hell’s fire over her. Not only has she set his world ablaze, but he’s found one soul he can save. He’s determined to free her from the insecurities that have damaged her soul.


Together they experience lava-hot passion as they weave their way through a tornado of emotions. But when Layton returns for her, will Zeke’s attempts to break the unworthy cage woven around her be enough to keep her in Strange Hollow forever?

Cate: Please tantalize us with a story blurb or excerpt.
Stacey:


Bryanna began to walk along the square garden, weaving her way through the flowers, leaning down to sniff one now and again. Just around the bend, a swing appeared. It was so old the white paint was flaked and rust layered the bars. It creaked with the wind as it swayed. She sat down on the cushion and leaned against it. Never had she felt so peaceful. Not once had she experienced anything so serene. Only adding to the perfect moment, the demon who walked toward her. He wore a grin that spoke of so much mystery, as if he knew all the answers and only waited for her to ask. His dark eyes, meant to frighten, only showed her the kindest of emotions.


He trailed his hands from flower to flower with a soft touch to insure no damage. She followed his every step. Her mind captured by thoughts of his hands along her skin, cupping her breasts, caressing her as carefully as he did the flowers.


When he plucked a fuchsia dahlia from the ground her focus came back to his face. With a slowness that nearly pained her to watch, he raised the flower to his nose and sniffed it. His eyes closed, the little furrow in his brow suggested the scent overwhelmed him. She gripped the cushion below her as she gulped deeply. By the elements, she’d never seen anything so sexy in her life, and she’d seen a man smell a flower before. But when Zeke did it, she melted.


His eyes snapped open, bored intently into hers. She did nothing to hide the fact he had completely and utterly aroused her. She wished he enjoyed her as much as he did the scent of the dahlia. He may be a demon, but right now, it didn’t matter. He was too delectable to ignore. Besides, she deserved a little fun after what she’d been through these past days. Using him as an outlet to bring some happiness into her life was nothing she would feel bad about.


He waited only a moment. Something changed in his demeanour, almost an acknowledgment that he’d waited for. In only a few strides, he closed the distance between them, knelt down and held the dahlia up. “You know, I’ve never been one for roses. The way a dahlia feels against your skin is much more pleasing.” He touched the back of her hand with the flower, and that earned him a little shudder. “The petals feel like a hundred fingertips along your skin.” He began to slowly run the flower up her forearm.


Her breath sucked back into her lungs. Unable to stop her eyes from shutting, she revelled in the way he touched her. So gentle, yet intent, done in a way to entice her. Slowly, the petals danced along her skin until the tips tickled her jaw line. He ran the flower from her cheek to her lips, where he slid it in a soft whisper across her mouth.


At that moment, he stopped, the flower no longer touching her. Her eyelids fluttered open, and her breath whooshed out in surprise to find his face so close to hers. He held the flower out, smiling in a way that melted her insides. “Did you enjoy the touch of that?”


“I did.” If she’d been bolder, she would have asked for more. Instead, she took the flower from his hand and raised it to her nose without taking her eyes from his.


His expression turned molten, suggesting where he wanted to take this. And she wouldn’t stop him. She needed him just as much. There was something to him, a way about him that she wanted to lose herself in, even if for only a moment. She wasn’t stupid to the ways of the world. She’d seen how cruel love could be. Zeke wanted her body, nothing more. Something she was all right with. A relationship with no strings attached was just the thing she needed to get over Layton. Her heart couldn’t handle any more pain.


With that, she gave him a sultry look to egg him on. His gaze smouldered like the fires in Hell. He leaned forward and cupped the sides of her face. “You must decide now if you want this.” He ran his thumb over her lips and licked his own. “Because once I kiss you I won’t stop.”
She was ready to say “Get on with it.” But there was a smidgen of hesitation that had her worried. “I’ve never … been with a demon.” She looked at the bulge in his pants. “Are … is everything the same?” Who knew what he had in his jeans?


His deep chuckle sent shivers down her spine. “My body is human in every sense–you won’t find a devil’s pitchfork in my pants.”


She laughed nervously. Well, what could he really expect? Her mouth parted to answer him, but she decided action would speak her point well enough. She closed the distance and kissed his mouth. If she’d doubted how much he wanted her, she didn’t now–his kiss couldn’t lie. His hands tightened around her face as his mouth encouraged in sync with hers. Tongues entwined, lips pressed together firmly. Every touch sent tingles straight to her center and caused heat to build between her thighs.


After a final swipe of her tongue, he sucked her bottom lip into his mouth and bit down very gently. He released it, still holding her face in his hands. His eyes bore into hers in a way no man had ever looked at her before. His eyebrow arched up suggestively. “Bryanna, are you ready to play with fire?”


“Holy earthquake, am I ever!”

Cate: Can you tell us why we're going to love your hero?
Stacey: Simple. He’s demon gone good. He fights against his nature and spends his time doing good deeds. What’s not to love about that? But…he’s sexy-as-sin too. That always helps!

Cate: Tease us with one little thing about your fictional world that makes it different from others.
Stacey: The paranormal creatures in this story aren’t your usual group. They all have something about them that in the eyes of the world makes them flawed, but in my eyes, that’s what makes them so great!


After that, in April 2012, WEREWOLVES BE DAMNED will release with Entangled Publishing. It’s a series of four novels that has romance, danger and mystery—lots of ass kicking action with a snarky heroine.


I’m currently writing BITE ME, I’M YOURS, which is another urban fantasy romance that I will be pitching to my agent. I haven’t quite decided if it’s going to be a series yet, but how it’s shaping up—and my habit of turning books into series—it’s quite possible.

Cate: What inspired you to draft your first story?
Stacey: The telling of a story. Writing the first draft is my favorite part. I don’t plot my stories so it’s an exciting adventure while I’m writing it. I could really do without the rest. I grumble through revision and usually don’t get happy again until we’re in the final round of edits.

Cate: Do you have a writing routine?
Stacey: Coffee! That’s my routine. I can’t write without it!!


Cate: Where can readers find you on the web?
Stacey:
Website – http://www.staceykennedy.com

Cate: Readers, Stacey Kennedy is giving away a book to a random commenter... so start commenting. She'll pick a winner on September 30, 2011 and announce the winner here.


Thanks so much for being my guest Stacey! Best of luck to you.

Email ThisBlogThis!Share to TwitterShare to FacebookShare to Pinterest
Labels: Romancing Your Dark Side, Stacey Kennedy, Whatnots and Doodads

Welcome Stacey! Love that cover. Sounds like a fantastic read!

I still love the cover and sooo want to read the book. Thanks for the interview and information.
-Dawn aka dawnmomoffour
thedoyle6@rogers.com

Thanks so much for the interview, Cate! :-)

Stacey, A BSMD romance? Was that fun to write? Or difficult? I love those kind of stories because they usually push the limits of the norm. Thanks for the sneak peek! The book sounds awesome...I have a thing for demons :)
viajeradelmar@aol.com