Cate: Please welcome PG Forte to my special Halloween celebration. PG, please tell us a little bit about yourself.
PG: Hi, Cate. Thanks so much for having me here. Hmm. What can say about myself. I grew up in New Jersey, lived in NYC for about eight years and then moved to California—which is home. It’s also where my kids were born. I spent about a year and a half in Florida, a few years ago, but that was only physically. Mentally, I never left California. Can you tell I’m really glad to be back? I always wrote, but I got serious about ten years ago. My first book was published in 2003 and I have 17 books out right now, with another releasing next May. I write mostly paranormal romance (with a few erotic contemporaries thrown in for good measure) everything from angels to vampires to ghosts to faery shape-shifters to fairly ordinary people having not so ordinary experiences! 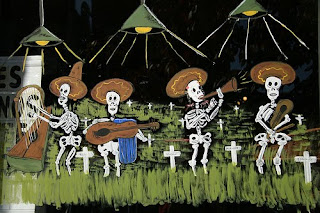 Cate: Wow, 17 - congrats! So what do you love most about Halloween?
PG: I love everything about this time of year—the weather, the colors, the crispness in the air. It didn’t surprise me at all to learn this was the original New Year’s Eve, because that’s how it’s always felt to me anyway. But what I really love most is Day of the Dead, or Dia de los Muertos. The idea of celebrating the past, remembering those who’ve passed on—and then moving forward yourself, really resonates with me.

Cate: Do you have a favorite memory of a Halloween past?
PG: Taking my kids trick or treating when they were young--the cool, clear nights, the decorations, the kids looking so cute. It was a magical time for me… luckily, they liked it too! LOL!

Cate: I miss those days *sigh* Have you ever had an unusual experience you couldn’t explain?
PG: Oh, I’ve had quite a few “unusual” experiences but I can always come up with explanations for everything! But, since we’re discussing the Day of the Dead anyway…my grandmother appeared to me in a dream the night she had her fatal stroke. In the dream, she very insistently pointed out a rainbow to me and told me that when I saw the rainbow, I’d know everything was going to be all right. The next morning I got the call about her and when I arrived at the hospital the very first thing that caught my eye was a huge neon rainbow. Coincidence? Maybe. Nothing more than my writer’s imagination putting two and two together and coming up with five? Perhaps. But it helped me get through the next few weeks, so who’s to say?

Cate: I love that! What frightens you the most?
PG: Pain. I have a fairly high pain threshold, but that just means I have less experience dealing with discomfort. LOL! Also the thought of something happening to one of my kids terrifies me. I know I worry more about them than they worry about themselves (they don’t worry nearly enough, IMO) but I guess that’s how parenting works.

Cate: Yes, sometimes a writer's imagination is a curse!
Ever gone on a ghost tour? Or ghost hunting on your own?
PG: Sure. I’ve taken a couple of tours—the Queen Mary being one. I even lived for a while in a haunted house—that was an experience! It’s surprising how easy it is to get used to the sight of shadows sliding across the walls when nothing in the room is moving.

Cate: Any favorite Halloween recipes you’d care to share?
PG: Well, Halloween’s all about the candy, isn’t it?
Posted by Cate Masters at 1:02 AM

PG I enjoyed your excerpts and the story blurb....and your cover?? It's great!
I was thinking about Hallowe'en when I was a kid in the last century (kidding! sorta!) and we used to get one or two wrapped ornage and black candies that were like a sweet gooey toffee...wonder what ever happened to them? And, we actually used to get apples!!

Hi, Mimi! Thank you. I've been very lucky with covers.:) And, yep. I remember getting apples too. And cookies! Can't do that now, more's the pity.

Cate--congrats on finalling! And with FOUR stories! wow, that has to be a record! Good luck!

Thanks PG! Sorry I didn't welcome you earlier, I'm having a little trouble concentrating today - too much excitement! :)

Hey PG! I love Halloween-- and it's actually about more than the candy (though that's certainly a perk! :)). I just love the feel of this time of year. I'm a huge wuss with scary stuff, but I'm still really drawn to spooky Halloween stories! :)
Erin

Cate, I totally get the trouble concentrating thing. I only have one book that finalled, but I'm still pretty excited. Are your books in different categories, or are you competing against yourself?

Erin--very true. I guess I was thinking about recipes when I said it was all about the candy. This is my favorite time of year regardless. I'll have to stockpile some spooky stories for when we meet up in April ;) Oh, and congrats to you too, btw, Ms. Double Finalist.