In the Author Spotlight: Marva Dasef

Cate: Please welcome Marva Dasef. Marva, will you please share a short bio with us?
Marva: Here's my standard bio, so excuse the 3rd person. Marva Dasef is a writer living in the Pacific Northwest with her husband and a fat white cat. Retired from thirty-five years in the software industry, she has now turned her energies to writing fiction and finds it a much more satisfying occupation. Marva has published more than thirty-five stories in a number of on-line and print magazines, with her stories included in several Best of anthologies. She has five published books. See a complete list of her work at http://marvadasef.com/.

Cate: Tell us about Ultimate Duty.
Marva: ULTIMATE DUTY is space opera with a bit of romance. It was released on November 7th from Eternal Press. It'll be sold as a PDF on Eternal Press initially, but will be distributed everywhere EP sells ebooks.

Cate: Congrats! Please tantalize us with a story blurb or excerpt.
Marva: Remy Belieux, a woman born into a life of servitude on a repressive factory planet, is desperate for a different life. When she's accepted into the Space Service Academy, run by the organization that enslaves her planet, she discovers the truth behind generations of rebellion. Now, she must decide what to believe, where her ultimate duty lies, and fight for more than her life against impossible odds. 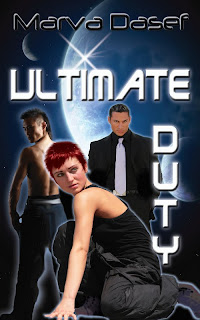 Excerpt
Remy and Garrett arrived at the outer wall path that led to the dock ports. Remy hoped at least one shuttle was still attached to the station. She dropped to the floor and peered down the slope of the passageway. Two guards stood at the entrance to bay 5. Luckily, they faced the opposite direction. Remy slid back and pointed silently, then held up two fingers. Garrett nodded and pointed left and then at himself. Remy nodded.
With no way to get any closer unseen, they must use speed instead. Both stepped back a couple of paces, so they’d hit the corner at full tilt. A nod from Garrett, and they sprinted through the twenty meters separating them from the guards. One guard turned to look only when Remy and Garrett were close enough to attack. The guard yelled, “Halt!” as he raised the barrel of his blaster. The second guard turned with a confused expression and didn’t manage to raise his own weapon before Remy reached him.
Remy felt her mind and body slip into fighting mode. Time slowed for her and she noted every detail of the guard’s stance. She leaped high in the air, her legs coiled like springs. The second guard finally lifted his rifle but never had the chance to fire. Remy drove both feet into his abdomen, slamming him against the wall with the force of her strike. In the low gravity she landed easily on her feet crouched and ready. She crossed her arms against her torso, grabbing the guard’s belt with her left hand and prepared to strike with her right. The man’s eyes widened when Remy’s backhand arced toward him. The force of the blow across his jaw sent him tumbling to the floor.

Cate: Very cool. Can you tell us why we're going to love your hero?
Marva: Remy is strong, but vulnerable with self-doubt. Remy takes her oath to the Space Service seriously, and struggles with information she learns when captured by the rebel forces. She's attracted to the leader, but would never break her oath just because she starts to fall for him. She isn't sure why her parents never told her about her family's early involvement in the rebellion against the corporate government. Until she learns the full truth, she has to remain loyal to a government which she's rapidly finding to be evil.

Cate: What's next for you?
Marva: I have a mystery/suspense, “Missing, Assumed Dead” scheduled for release next year from MuseItUp Publishing. There might be just a teensy bit of paranormal in this one. MuseItUp has also taken my middle-grade fantasy, “Bad Spelling,” for an October 2011 release. Quite fitting because it's about a witch who can spell worth a darn. It has two sequels which I hope MuseItUp will also want.

Cate: Sounds great. What inspired you to draft your first story?
Marva: Taking a fiction writing class in college. I was already a journalistic writer, but the class forced me to make something up rather than reporting on actual events. It didn't hurt too much, so I kept at it sporadically while working my way through a career writing technical documentation and raising a couple of kids. I picked up writing fiction full-time when I ditched my job about five years ago.

Cate: Do you have a writing routine?
Marva: Um, routine? People have a routine? Seriously, I never force myself to write every day or on a schedule of any kind. When an idea starts to form, then I'm a workaholic. I work on it full-time until I've got a draft. Then I can ease off a bit while my intrepid beta readers have at it.

Cate: Where can readers find you on the web?
Marva: I have a website and I blog. Of course, I'm also on the usual suspects: FaceBook, Twitter, MySpace, etc.
My website: http://marvadasef.com/
My blog: http://mgddasef.blogspot.com/

Cate: Is there anything you’d like to ask our readers?
Marva: What's your favorite genre? If you're also a writer, what do you write?

Cate: Readers, Marva is giving away an ebook (PDF) to a random commenter... so start commenting. She'll pick a winner tomorrow evening.
Thanks so much for being my guest, Marva! Best of luck to you.

Hi Cate, Marva,
I know Ultimate Duty is a great read. I had the opportunity to read it. I only wish I could write as fast as Marva.
I love her plot and Remy is an extrodinary character. I'm sure we'll see more of her in the future.
As to the questions,I read many different genres of fiction and as a writer I don't like to confine myself to only one genre. I must get bored easily. I stay in one world for a while, then love to sink into another sort of world.

I really liked Marva's world building in her Ultimate Duty. I thunked right smack into her world with ease.

Good going, Marva. Thanks for sharing

Thank you, Cate. I appreciate the feature.

Hi Lorrie. Glad you dropped in.

Sorry I didn't get to welcome you earlier Marva.
I'm the same way, Lorrie. I like to mix things up and read a little bit of everything.

I read anything that catches my interest - but do tend to lean towards paranormal. Ultimate Duty sounds like one that I'd like.

I'm mainly a science fiction writer, though I have a vampire novelette published through Eternal Press. I pretty much grew up reading SF.

I currently have two SF novelettes out through a different publisher. One's a straight SF space opera dealing with racism in the future. The other's a bit wackier and more "out there"; aliens, nanotech, etc. I like to do it all, even the odd fantasy on a whim.

Thank you for sharing, congrats and best wishes.