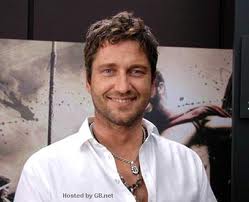 Hell’s bells. There she sat, in all her pretended glory. Mac’s father had always told him he’d been born under a bad moon, and he’d have to steal a four-leaf clover to have any luck. This woman following him bore a worse ill omen than a banshee. A beautiful one, yes, with an entrancing smile, but he’d already glimpsed her true nature.
Oh, he’d love to acquaint her with his rules of play.
Mac bears a striking resemblance to Gerard Butler, doesn't he? ;)
Check out all the awesome Six Sentence Sunday authors here.
Posted by Cate Masters at 1:08 AM

Some fantastic word choices, Cate. In all her pretended glory, born under a bad moon, acquaint her with his rules, I love it and want to read on.

And I can't wait to find out just what his rules of play are! Great six!

I would like to hear more about those rules of play!

What are his rules? No really, what are they?

Ver good internal dialogue, tells us a lot about Gerard Butler --erm, the character. Great going on all the upcoing releases!

Oh, I'd love to hear more about his rules.

The resemblance is amazing. :) Love your six, but then I love anything you write.

I want to read more!

Hells Bells! One of my favorite period comments. :) Love that she's doom on two legs, but he's not running away. Great six!

a rascal observing his own kind. good six, Cate.

Loved your six! And the photo puts everything in perspective. ;)

Any hero that bears a resemblance to Gerard Butler is one I can get behind...or in front of...or on top of. Yay!

A worse ill omen than a banshee...

Love how you, through him, show us what she's like. At least in his eyes.

Thanks so much for stopping by my blog. And LOVE the mancandy. :)

I like both the direct characterization of Mac and the indirect of Norah.

His rules? I think she might have some rules of her own! Nice.

I loved this! Now I'm hooked

I loved , "he’d have to steal a four-leaf clover to have any luck". very cute

Wait, there's words on the page? I was distracted by Gerard...*drools*

Sounds like a proper rogue. If she isn't interested, send him my way. I always love a Mac!