Only one week till Rock Bottom releases! 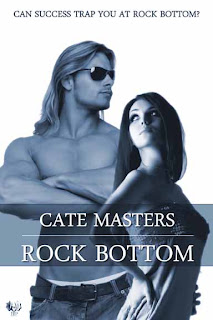 Woo hoo! I'm so excited release day's almost here. I love this story!
Okay, I love all my stories but this one's especially special to me. The heroine, Billie Prescott, is smart and snarky. Her passion is music, and as a rock journalist, she combines her personal passion with her professional life. I wish I were her!
Jet Trently is every rock star I loved growing up, but more heroic. Also smart and snarky, he makes music that touches every woman's heart and soul. *sigh* lol
Here's the blurb:
For rocker Jet Trently, success means playing the same platinum-selling hits over and over. Philly rock journalist Billie Prescott thrives on covering the latest releases. When her editor sends her to Malibu to cover Jet’s reality dating show, Rock Bottom, her blog’s success keeps her trapped there. Her life’s at Rock Bottom too, until she hears Jet’s new songs. They touch her heart as his music did when she was 15. When Jet touches her heart as well, will the reality show ruin the real thing?
Here's a mini-excerpt, just after Billie arrives in Malibu to meet the producers of Rock Bottom, Jet Trently's reality dating show:


Billie affected a sharp business tone. “Already did. I’m Billie Prescott from Strung Out. My editor spoke with Mr. Gilbert about covering the show?”
Jet’s eyes widened. “You’re Billie Prescott?”
Billie had a feeling she’d just made Jet’s Lust Have list, though she had no doubt the list, if printed, would require reams of paper. If he licked his lips, she’d be out of there before he could retract his tongue. “You’re expecting me, aren’t you?”
“Billie Prescott, yes. You--no.” His appreciative gaze wandered the length of her.
The trio chuckled in unison.
Like she didn’t get that same response every freakin’ time. Biting back a snide reply, she forced out, “Do you have an information packet for me? Something that will help me catch up on where season one ended?”
Stu glanced at Jet. “Cindy can put something together.”
Jet tilted his head. “Not a fan, eh?”
If she didn’t know better, she’d think he appeared pleased.
Wrinkling her nose, she grinned. Let that be answer enough.
“Pity you weren’t a contestant.” He arched a brow and turned to the third man. “Now there’s an idea.”