The laptop screen cast a pale blue-white light across the keyboard, enough to navigate the web. Billie Prescott clicked through the pages. “How perfect.”
From the bedroom sounded a creak, then footsteps padded up. Strong arms encircled her waist, and a deep voice rumbled in her ear. “Porn surfing? Without me?”
Giggling, she leaned into him. “This is porn to me.”
“Tree houses?” He rested his chin on her shoulder and then nudged his shirt away from her neck to nuzzle.
“For adults. Aren’t they amazing?” Since reading Robinson Crusoe as a little girl, she’d harbored a dream to live in a life-sized house in the trees.
“Come back to bed. You’re wrinkling my shirt.”
His sexy growl trembled along her skin, made her yearn for what it promised. “But these are--”
He cupped her breast and squeezed.
Instinctively, she slid her hand up into his hair. “You’re right. I can look at them some other time.” Two years she’d waited for him. Two long years of flirting and innuendo, and a date here and there in various states of undress before finally landing him in her bed. As much as it had delighted her to awaken and see Everett sleeping beside her, she had difficulty imagining him in her dream house.
Still, she took his hand and let him lead her to the bedroom. He may or may not be her soul mate, but only a thorough investigation would reveal the truth. A long, deep, intensive investigation.
Everett excelled at intensive. For short intervals, at least.
* * * * 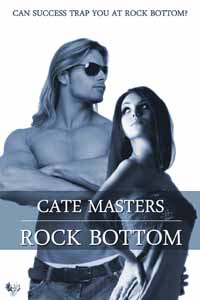 Wow Cate! Thanks you so much for sharing the first chapter. That's a hot start.

Thanks so much Angela! Glad to hear you enjoyed it. It was a blast to write.