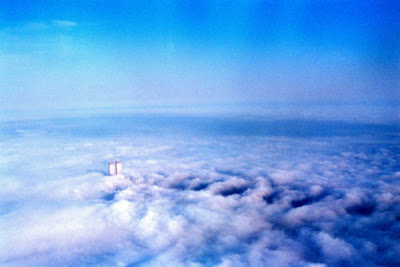 Hard to believe it's the tenth anniversary of September 11. I had a hard time believing it as it happened. It overwhelmed me, and still does. I could hardly stand to watch the news - the repeated replay of the planes as they hit the Twin Towers - yet I couldn't tear myself away either. It was like being in a nightmare, the kind where you know you're dreaming, but not being able to wake up.
I'm sure a lot of people feel the same.
Someone snapped the photo above from an airplane, seeing the Twin Towers rising above the clouds on approach to land in New York. It was a few months before the attacks. The image became iconic.
That day, my husband was driving through Pennsylvania - not far enough from Shanksville for my liking, though we had no idea at the time what was occurring there. I was at work in Harrisburg, and the staff congregated around the television to watch the news reports.
For me, worse than those repeated videos were the photos of the jumpers. They haunted me night and day. I'd wake in the middle of the night and see the people falling. The horror's too great to fully comprehend.
I understand the need to commemorate the occasion. The loss resonates too strong even now.
It was the one time writing failed me. Before, I could always sort my feelings by putting them to paper. Not during that tragedy. And I still can't.
I've been reading a lot of the accounts that have surfaced for the anniversary, and many left me blubbering. My heart goes out to the families involved. It struck me as I read, another idea resonates strongly - that our lives all intersect, and we usually remain unaware of our impact on others' lives, critical though it may be. Another reminder to treat others well, do whatever we can to help one another.
But I can never bring myself to read any fiction that touches on the subject. I know it's a release for some writers, and certainly a powerful theme and subject.What about you? Does it bother you to read fiction based on 9/11?


***
For anyone who found their way here for Six Sentence Sunday, I'm away this weekend but will try to visit sometime this week! I need my SSS fix. And I'll join in again next weekend.
Have a great week!

I can't say it doesn't "bother me", it definitely does, but it's not something I'll avoid. Most fiction based on historical tragedy bothers me. This one is just something I happened to have lived through as an adult, so it resonates much stronger.

This was beautifully written, Cate. Thank you for sharing your experience. And yes, I've read a few stories involving 9/11. Not easy to get through, but thought provoking. See you next week for SSS.

Cate - I was a Red Cross disaster worker at the WTC after 9/11. A month or two after I got home, our local chapter held a post-disaster meeting for all the volunteers who had gone. Usually these meetings are noisy, everyone exchanging stories of their experiences. This one was silent. Finally, one man asked a question: "Is anyone else still having trouble sleeping?" Every hand went up.

A few stories have intrigued me, Dianne. Maybe after a few more years I can read them.

Wow, LD, I can't even imagine. Nothing prepares you for that kind of emergency.

I have read books where 9/11 was an event in the background of a character but I haven't and won't read any books specifically about that day.
I also haven't watched any movies.

I'm still struggling with reading all these but this was beautifully written.

I still have trouble reading about Viet Nam.

I don't mind if it's a footnote in the story, but not if it's the main thrust of the story.