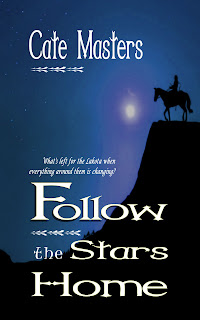 Reviewers have described it as: “an insightful and entertaining novel that’s bound to teach you a few things about history.  Kudos to Cate Masters for another winning novel. You won’t be able to put Follow the Stars Home down until you turn the last page.”
And “Quiet Thunder and Black Bear love each other. But can their love survive them being uprooted from their people, betrayed and lied to by the white man? Will they ever find their way back to their own people? You will have to read this story to find out. But it is a fabulous journey, and you will enjoy it every step of the way.” And “The love story between Black Bear and Quiet Thunder is tenderly told, and well-written.”

I hope you’ll check out the book video, reviews and more.


What’s left for the Lakota when everything around them is changing? Quiet Thunder and Black Bear fear for their tribe’s welfare when buffalo and other game become scarce. A military captain named Pratt promises to teach them white man’s ways so they can become successful. Quiet Thunder follows Black Bear to Carlisle, Pennsylvania, to the Indian Industrial School. The school’s rigid schedule allows little time together, and Black Bear grows more distant as his confusion over his identity grows. Can Quiet Thunder make him believe her love is as eternal as the stars?


Black Bear stared at her, the fullness in her gaze made his breath flutter like the fireflies. “The moonlight lit your face. You’re more beautiful than ever.” Warmth coursed through his face. He must have enchanted himself with the song. Though he’d thought it many times, he’d never before called her beautiful.
Unable to hold back any longer, he knelt in front of her, and she lifted up to kneel before him. Entwining his fingers through hers, he held them against the scar on his chest where the bone tore through two summers ago. With a voice soft as a trickling stream, he spoke. “I welcomed the pain of becoming a man. Do you know why?”
“Because you wanted to be a great warrior?”
His thumbs caressed the back of her hands. “No. The time of great Sioux warriors is ending. I must learn to be a better hunter. To provide for my family.” A family he wished with all his heart to have with her. His insides lurched when she glanced down.
“Black Bear—”
She tried to slide her hand away, but he held it fast.
“Please let me speak.”
His seriousness silenced her. With a nod, she lifted her gaze to his scar, the mark of his love for her. It spoke of his hopes for their future. From now on, he wanted it to be a reminder of this night.
Soft urgency gave fire to his words, and the fire sparked in his blood. “I know now why you are called Quiet Thunder. I didn’t know I could feel such thunder inside. It overtakes me every night while I try to sleep. In everything I do, I feel your spirit with me. I need to know if you feel the same.” He pressed her hand against his scar so she might feel his heart thudding through his skin. It pulsed with his life’s blood as if to mingle with her own.
When she raised her chin, moonlight illuminated her face, her dark eyes ablaze. “Yes.”
Posted by Cate Masters at 7:04 PM

I love the cover of this book. It's shameful what was done to the children brought to Carlisle during that time.

The research for this story fascinated me, Susan. My heart went out to those poor kids ripped from their families.