Whew, I almost didn't have a post for today, then two writers tagged me for two different memes just in time. :)

Thanks to C.M. Brown for thinking of me for the You Got the Look meme!

In this one, you go to your current WIP and search for the word "look," then post the surrounding paragraphs.

Here's a peek at a dark paranormal novella I recently subbed:

Something about the performance mesmerized me. I had to watch until the end. I found more than the torches incendiary. Her movements practiced and deft, the fire dancer appeared completely at ease, as if the flames wouldn’t scorch her skin should she slip up. Maybe the very risk of it exhilarated her; she glowed brighter than the fire. She looked more alive than anyone I’d ever seen. More free.


An ache filled my chest. How I envied her!
“We’re leaving.” My companion said, a challenge in her tone. She stepped away, and the other two joined her.


My focus followed the twirling wands. The woman tossed one high, then the other, easily catching both on their descent. She swirled them around herself so rapidly, she created a cage of flame around herself, a glowing twine that streaked the dusk.


A fire mage? Eldie hadn’t mentioned any newcomers, though this fire dancer could easily have been an enchantress. I was under her spell.
I wanted to feel her skin on my skin, move with her in that exhilarating, intimate dance. I wanted her to burn me in the deepest way, and free me if only for a brief time.

Now to tag five other writers to pick up the meme or not as they so choose! But I encourage you to visit their sites and follow them:
Arlene Webb
Barbara Elsborg
Susan Gourley
Sonya Clark
Jessica Subject

Thanks to Sonya Clark for tagging me for The Next Big Thing! I'm going to continue to share a little bit more about the story above.

What is the title of your book?
The Vitruvian Man

Where did the idea come from for the book?
Articles in two very different magazines. The first described Carnevale in Venice, a ten-day festival of general merriment and bacchanalia in masquerade costume. Ad an article in The Smithsonian Magazine in which a researcher found a sketch of The Vitruvian Man by another artist that predated Leonardo Da Vinci's. In researching Da Vinci, I learned his contemporaries sometimes wondered about his methods. I can't give too much away, so that's all I'm saying. :)

What genre does your book fall under?
Hm, this one's a toughie. I call it a dark paranormal, but there's also magic involved, and I wouldn't be surprised if some book seller sites plugged it under urban fantasy.

Which actors would you choose to play your characters in a movie rendition?
I imagined the heroine, Melina Weaver, as a young Elizabeth Shue. For the hero, Gerard Butler would fit the bill nicely!

What is the one-sentence synopsis of your book?
When scientist Melina Weaver unleashes her wild side as a fire dancer at Venice's Carnevale, she finds herself out of her depth after meeting Bruno DiCesare, whose costume hides more than an average alpha male.

Will your book be self-published or represented by an agency?
As I mentioned above, I have subbed is, so I'm hoping it will be published by that e-publisher. :)

How long did it take you to write the first draft of your manuscript?
The first draft took 3-4 months, but revisions take many many more months!

What other books would you compare this story to within your genre?
You stumped me. I try to make my stories unique, so I hope it stands on its own.

Who or what inspired you to write this book?
A combination of things. I'd researched ancient dances for another dark paranormal, Dancing With the Devil, and learned about fire dancing and it intrigued me. After reading about Carnevale, it sparked the idea for the setting - the festival spans ten days, which made for a perfect time limit for someone who couldn't appear in public without a costume.

What else about your book might pique the reader’s interest?
A hero unlike any readers have seen before - an off-the-charts alpha male, but he's highly educated and sophisticated too. An intelligent and resourceful heroine who must pit her wits against a surprise enemy, and must learn to navigate through strange territory to save the hero. The setting's unusual, too - I've never seen a story set during Carnevale, and the masquerade provided a fun element.


As far as passing this along to other writers, I'd love for anyone who wants to pick up the meme to do so.


Win a Nook loaded with 45 ebooks!

Just in time for the holidays! Enter at Decadent Publishing's Daily Dose of Decadence blog before December 15. Lots of wonderful books on the list. :) 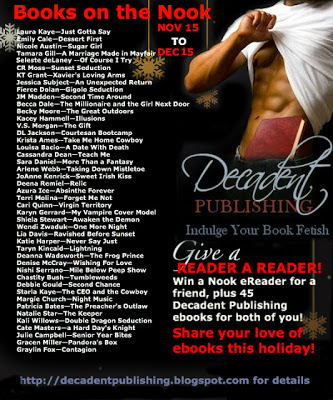 Thanks for the tag. I actually already did the look thing. It was fun.
Good luck your new submission.

Great excerpt you posted and exciting next big thing.

Thanks Susan! And I still encourage others to visit your site. :)

Thanks much Angela! Love your new pic!

Thanks much M! They're actually the same story, I made the memes do double duty, lol