Cate: Yay, JoAnne Kenrick is here to help us Celebrate Amore. JoAnne, please tell us a little bit about yourself.

JoAnne: Hiya, Cate! Thanks so much for inviting me to help you celebrate Amore here on your blog today. About myself, let's see. I'm a romance author who dabbles in creating book trailers. Suppose you could say I'm best known for my Irish Kisses series, of which most of the books have been bestsellers on Bookstrand, ARe, and Amazon. Guess folks love my Irish bartenders ;) I know I do!

Cate: What's not to love? :) What do you love most about Valentine’s Day?
JoAnne: It's a darn good excuse to watch a super romantic movie, and to treat myself to some yummy chocolates and other decadent treats.

Cate: I like the way you think! lol Do you have a favorite Valentine’s Day memory?
JoAnne: Honestly, this question takes me right back to High School - I bought this super expensive 'puffy' V-day card for a boy who didn't know I existed. I proceeded to sneak him the card, unsigned. I remember hearing from my friends for weeks after, how he had no clue who it was that sent him the card. But he was desperate to find out. tehehe One of my hairs had apparently got caught in the sellotape on the envelope; he quizzed every girl he knew with my color hair. Shame he never asked me ;) Yeah, I was super shy in school.

Cate: Aw, so sweet. Do you have any romantic Valentine’s Day traditions?
JoAnne: Ha, yeah…I do. Disagreeing with my hubs that V-day isn't just a commercial holiday created to steal your money, and that it's okay to get me a lil pressie. The other tradition is, I always lose the 'discussion'.

Cate: Hope he makes it up to you in other ways. ;) Tell us about your latest release, and where readers can find it online.
JoAnne: You betcha! Hot Winter Kiss is my latest release, which is a snowed in wintery kinda romance set in a remote Irish castle. A May to December romance, barmaid of Bell's Irish Pub and granny gets a Christmas present of her dreams; a 1Night Stand with an Irish hottie…but she doesn't realize her rude hero and host at the castle is her date until later, and he just keeps on getting her knickers in a twist..in more ways than one. It's my favorite Irish Kisses book to date, because Sandra has been in each of the Irish Kisses stories; I've grown to love her like a sister. It's awesome she finally got her own HEA. If anyone of my characters deserves it, she does. She puts up with some crap from those Bell's boys.
To find out more about Hot Winter Kiss or any of my other releases, please head on over to my website www.joannekenrick.com 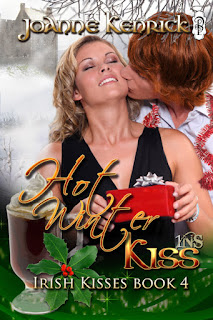 The gentle snowfall transformed into a blizzard. Ardan flicked the windshield wipers to full whack. Lucky they only had another couple of miles to go and could walk if the car got jammed in a heap.
Slowing the vehicle to a crawl, he prayed his mid-renovation Alfa Romeo would hold out. He would have used the four by four, but his mother had borrowed it.
His passenger leaned against the window with her mouth wide open, her breath heavy. Damned woman slept, out like a log. How could he apologize for the terrible first impression he must have given her? Stupid digital books and noisy bar. He despised the bustle of the city, but he hadn’t meant to take his impatience out on her. Amy often said he had low tolerance levels. Guess she’d been right.
Amy, his wife, had died on Christmas Eve two years earlier. He kept her pink blanket on the back seat where she always threw it no matter which car they used. “Living out in the sticks,” she’d say, “means you have to be prepared for anything. This blanket could be the difference between staying alive or freezing to death if the car ever breaks down.” He didn’t have the heart to throw the precious keepsake out or stash it in the attic.
Reaching to the back—keeping his sight focused on the road ahead—he felt around for the cover. His digits landed on something soft and he yanked it to the front and brought it to his nose, searching for some semblance of comfort. The scent of her still wedged in the thick softness. The faint, but distinct waft of her favorite flowery perfume filled his nostrils, and his memory hurtled back to when she insisted on knitting the thing. Her little side smile, the sparkle in her violet eyes—as if it were yesterday.
His heart lay heavy. A sigh escaped him and steamed up the window.
Sandra shivered, and her knees knocked together. The poor lass was freezing. Instinct made him want to cascade his treasured knit over her, but his mourning for his dead fiancée made him pause. “Damn it, Amy wouldn’t want her ta catch her death.” He placed the blanket on her knees and lifted it around her shoulders. Without the harsh din of Laverty’s and her crass tongue to bug him, she was stunning. Naturally pretty. Shame about her foul cockney mouth.
He’d known Sandra was a touch older than him but Christ, how old had she said she was? Word around the country club was the 1Night Stand agency had a spotless record—he trusted the match and figured there’d be a solid reason why Madame Eve thought they’d be good together.
Distracted by his thoughts, he lost control of the vehicle, and the front end swerved to the right. He turned the wheel and eased his foot down on the brakes, the friction from the wheels over ice sending a high-pitched whir echoing across the frosted countryside. The back of the car jerked to the left and sent them skidding into a snowy embankment.
“Bollocks!” He turned the engine over and nothing happened. He tried again, and again. Still nothing.
She stirred but somehow neither the commotion nor his swearing woke her. Muttering under his breath, he poked her. “Sandra,” he whispered. No movement. He put his hat on and buttoned up his coat. Blizzard-like conditions and bitter night air–he didn’t want to freeze to death out there, and it’d take a half hour to trek to the castle.
“Ya gotta wake up. We’ve got twenty minutes of light left—if we don’t hurry, we’re in big trouble.”
“Hmm, what?” She stretched her arms over her head and yawned. “Are we there already?”
“Me car’s dead.” He got a torch out of the glove box and maneuvered around black ice to open the door for Sandra. “We gotta walk the rest of the way.”
“I ain’t bloody well walking anywhere, donkey ass idiot. I’d rather die in the snow.” She shivered and shrank farther under Amy’s blanket.
“Ya get ya cockney ass out the car now. If we keep a steady pace, we’ll be by a fire sipping hot toddies in no time.”

Cate: Love a man who knows how to inspire a woman, lol. What inspired you to write about the theme?
JoAnne: Sandra did. I always knew she'd get her own story the day I finished book one, Sweet Irish Kiss, but I didn't know who her dream guy was just yet. I had to get to know her…and she led me to the May to December theme. Also, she deserved to have her super romance experience since she's a mega romance reader herself.

Cate: Anything else you’d like to share?
JoAnne: I hope you're not suggesting I share my man? hell no. That dude is mine! Mine, I say.

Cate: lol, I can understand why! Oo, you lucky readers, JoAnne has a surprise for you.
JoAnne: I'd love to gift a reader of your blog an ecopy of Hot Winter Kiss! Comment with a chance to win. Recipes for a Valentines Irish cocktail fit for Bell's Irish Pub will get an extra entry point ;)

Thanks for having me along today, Cate! I'm honored to be a part of your Amore celebration xx

We'll be with son and his wife in Dallas on Valentine's Day and son said - we could all go to the same restaurant but they wouldn't sit with us. Guess we aren't romantic enough. hee hee. We'll dogsit instead.

JoAnne, love the May / December romance plot, and getting stuck in a snow drift to boot! Excellent!

Hubby wants to go to Niagara Falls this Valentine's Day. Think we'll get snowed in? Gosh, I hope so!