The history of the Carlisle Indian Industrial School has long intrigued me. Shortly after moving to Carlisle, I caught a documentary about the school on PBS and it stuck with me. So much so that I had to write a novel about it, placing two fictional characters in these actual events. 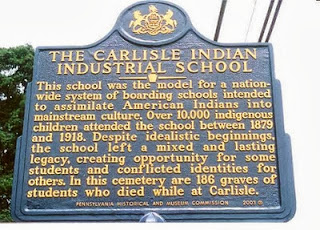 This is a photo I took of the historical marker near the former school site located on the Carlisle Barracks.

If you're not familiar with it, it's one of several facilities across the country that sought to "civilize" Native Americans by forcing youngsters away from their families to live in these institutions. Very sad.

Even sadder to drive  past the headstones in the small graveyard in the Barracks. About 170 children and teens died while at the school. One, Lucy Pretty Eagle, is said to still walk the grounds. She died at the tender age of ten. You can read more detail about the school and Carlisle's general history here. 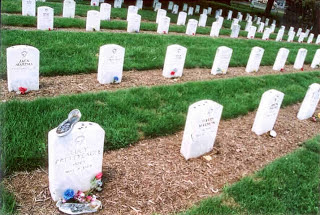 Here's a photo I took of the graveyard. People still visit to leave small offerings on the headstones of the children. Some students, like the world famous athlete Jim Thorpe, managed to get through school and live successful lives. Thorpe attended in the early 1900s. The stories that really struck me were of the first students at the school's opening in 1879, those who had no idea what to expect, who were punished for behaving as they were brought up to behave rather than an "American."

Another photo I took in a local museum. This group shot is nearly life-sized, so that when you view it, you feel like the children are staring back at you. And the haunted look in their faces stays with you. 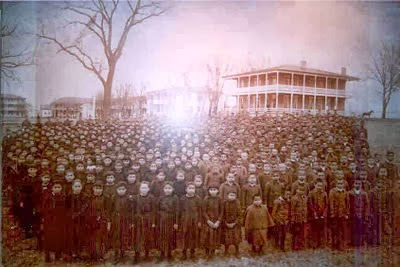 Another article mentions ghosts I'd never heard about before - the captured Hessian soldiers who helped construct the stone building near the Carlisle Barracks to house gunpowder, and which also served as a prison (later for "unruly" students as well). According to the article, one man who visited late at night said that rather stepping into the room that's now a museum, he was transported back in time to 1777 to a very active Hessian Powder Magazine room occupied by Hessians! The article has a few other interesting ghosts if you'd like to check it out.

I'll have another Halloween guest on Friday, so be sure to stop by!

I'd heard of stories where people were transported back to a certain time period.

One of my favorite stories is about a pair of teachers who ended up in an old British pub/inn. They thought they had wandered into a reenactment. Very surreal.

It actually happened twice in the same building in Gettysburg - the elevator went to the basement and opened onto a very busy Civil War hospital. Supposedly one of the hospital aides looked as surprised to see them as they were. Yes, very surreal!

What a horrid place, why did so many children die? Amazing the horror we do to one another, and once thought as good or right!

Many were extremely sad, confused and homesick, Yolanda. Some were exposed to sicknesses they'd never encountered before. The school made them do many things against their beliefs and customs - like cut their hair, which for them meant they were in mourning. They weren't allowed to speak in their native tongue, and could only keep one or two of their own possessions. Yes, it was very very sad.

What a sad way to treat Native Americans. They were here first.

Our treatment of the Native Americans is one of the more shameful parts of our nation's history. And it's not much better today.

Agreed Alex. If you ever have a chance to watch the PBS documentary, it's sad but important.

I read a book a long time ago about the school. It sounds horrific and really deserves to be haunted.

I learned about this school from two lovely ladies who wrote The Ledgerbook of Thomas Blue Eagle. What a sad time in history and this post reminded me of that awful time period and the horrors that went on.

This post was so informative and I found the ghost aspect interesting. Thanks for sharing!
~Jess

I love that picture book! I bought it while I was researching my own story. It really helped bring me into their view.